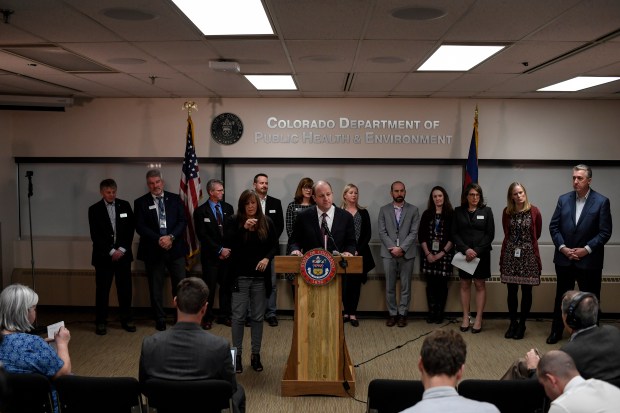 Two individuals have tested positive for the new coronavirus, state officials announced Thursday in the first confirmation that the deadly COVID-19 disease sweeping the globe has made it to Colorado.

One of the patients is a man in his 30s who was visiting Summit County from out of state. The patient traveled to Italy last month and has “known exposure” through close contact with a person who has COVID-19 outside of Colorado, state officials said.

The two tests conducted in Colorado are considered “presumptive positive.” State officials now will send them to the U.S. Centers for Disease Control for official confirmation.

“Coloradans get sick every day,” said Gov. Jared Polis during a news conference Thursday afternoon. “And I don’t want anybody to panic because of this.”

Polis announced the second case at the news conference that had been called to discuss the first case. He declined to release details about the second case, except that the person is not connected to the first patient.

In the first case, the man arrived at Denver International Airport on Feb. 29 and traveled to Summit County. He was in Italy in mid-February and a person with him on that trip has since tested positive.

The man is in isolation in Jefferson County. His wife and two friends are in quarantine. The friends are Coloradans, Polis said.

State and local public health officials are working to identify anyone who may have been exposed to the Summit County visitor while he was infectious, the news release said.

No specific treatment is available for the virus, so care for people with mild cases mostly involves medication to reduce fevers, rest and plenty of fluids. People who develop pneumonia, one of the most common complications, may need oxygen or to be placed on a ventilator.

The Colorado Department of Public Health and Environment’s state lab can test about 160 samples per day, with results in 24 hours.

“What people can expect is because we’re testing more frequently, we’re going to begin to see more cases more frequently,” said Jill Hunsaker Ryan, executive director of the state Department of Public Health and Environment, during the press conference.

With two cases now reported in Colorado, Polis said the state plans to expand its testing. So far, the state lab has run 93 negative tests for the disease, and another 38 are pending, he said.

“At the end of the day we have a very robust health care system in this state,” Polis said. “We’ve been preparing for this moment, we are now in execution mode of this plan.”

It’s not clear how long the virus could have circulated in Colorado and other states without being detected, because a study estimated it spread undetected in the Seattle area for as long as six weeks. There is no known link between the first patient in Washington, who traveled to China, and other people who became seriously ill, suggesting that people with mild or no symptoms unknowingly spread the virus as they went about their daily lives.

As of Thursday, 163 cases and 11 deaths from the new virus, known as COVID-19, have been confirmed in the United States. The virus got a slow start in the United States, with just a few people who were infected when they traveled to China, but has begun to spread in California, Florida and Washington state.

Most of the deaths so far have been in Washington, where an outbreak at a nursing home put medically vulnerable people at risk.

Worldwide, the virus infected about 97,700 people as of Thursday, according to The New York Times. About 3,300 have died. The CDC has advised people to avoid nonessential travel to China, South Korea, Iran and Italy because the virus is circulating widely in those countries. People who are at a higher risk of complications also should avoid travel to Japan.

Much is still unknown about COVID-19, but so far it appears to be somewhat less contagious than the seasonal flu. Preliminary data in China suggests about 80% of cases are mild, but that can make managing an outbreak more challenging, because sick people won’t necessarily know they need to isolate themselves. Initial data shows a death rate of about 3% – far higher than the seasonal flu – but it could be that authorities are missing mild cases because people don’t seek medical care.

Most people who have died worldwide were older adults with pre-existing health conditions. Children who are infected have tended to have mild symptoms or none at all, for reasons that aren’t entirely clear.