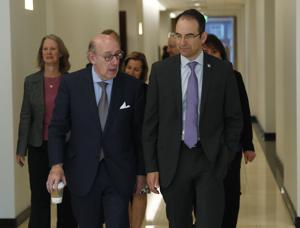 The Colorado Attorney General’s Office will release a report Tuesday naming new priests accused of abuse, a year after the agency completed a review of church records and compiled a list of Colorado Catholic clergy credibly accused of sexual misconduct.

The new report will include new, substantiated allegations against clergymen, officials said, as well as an update on measures taken by Colorado’s diocese and the Archdiocese of Denver.

The initial report, released in October 2019, found that 166 children had been abused since 1950; it also identified 43 priests implicated in the abuse. The list was compiled as part of a larger effort by the Attorney General’s Office — a review that examined 500 clergy members’ files and interviewing dozens of witnesses, clergy, victims and others. The review lasted eight months and was headed by Robert Troyer, who was previously the U.S. Attorney for Colorado.

The report sharply criticized the church’s “long history of silence, self-protection, and secrecy empowered by euphemism.” It noted in-house review boards’ cut “against long-standing and universally accepted methods for interviewing victims of any type of crime, let alone victims of sexual assault.” It identified one priest who’d allegedly abused 63 children over 21 years while the church was aware of the allegations against him and moved him six times.

That priest’s prolonged career, and the failings that allowed him to continue his alleged abuse, are described in the report as a “microcosm” of the Church’s mistakes, mistakes that led to further abuse and victimization.

“Notably, the data from our review also indicates that historically on average it took 19.5 years before a Colorado Diocese concretely restricted an abusive priest’s authority after receiving an allegation that he was sexually abusing children,” investigators wrote, adding that “seven alleged abusers” were never restricted by the church here. “Nearly a hundred children were sexually abused in the interim.”

The Archdiocese of Denver, along with the Colorado Springs and Pueblo dioceses, created a program to pay unlimited reparations to Colorado victims. As of mid-October, 73 victims had been paid, totaling $6.7 million.

Over the past few years, dioceses and states across the country have started to grapple fully with Catholic clergy abuse that occurred and were perpetuated in recent decades. Several states’ attorneys general have conducted their own investigations, although Colorado’s reliance on diocese-provided files sets it apart from the more litigation-minded inquiries.

In neighboring Wyoming, which falls under the umbrella of the Archdiocese of Denver, church leaders released its own list in June 2019 that identified 11 clergymen. It has since been updated to include two other priests alleged of abuse.

That list includes retired bishop Joseph Hart, who has been accused for at least 30 years of abusing boys, misconduct that allegedly began as early as the 1960s. He was bishop in Wyoming for 25 years, retiring in 2001; before that, he spent 20 years in Kansas City. Hart, 89, is the subject of a canonical investigation in Rome, which could see him defrocked.