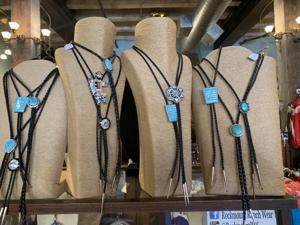 When you’re a woman of a certain height, certain wardrobe choices can feel like the wrong fit.

For a time, Chayse Romero felt that way about bolo ties.

Her hesitation stemmed from her first impression of the ties often made of leather cords, metal and decorative stones, like the ones she saw around the necks of handsome, burly cowboy types posing in Western-themed magazines.

Those images played into her general understanding of bolo ties and who they were for: Men, especially if they were tall, big and rugged, and rode horses. They were not for a 5-foot-tall girl from Louisiana. They were, probably, not for most people.

Then, Romero got into silversmithing while attending college in Durango. As she graduated and grew her business, she decided to try her hand at creating a bolo tie.

“As soon as I started wearing it, I felt like, ‘This thing is powerful,’” she said. “I felt empowered. I felt the universe saying, OK, it’s time to do this.”

This was around 2019, when friends started asking her to make custom bolo ties and Romero was starting to see them around more. The universe was telling her to try selling her own version of bolo ties. And she decided to listen. She chronicled the journey in a blog post titled, “The bolo comeback.”

“Some people, especially women, are intimidated by these,” she said. “How can we make them less intimidating?”

This was one reputation built around bolo ties. It wasn’t based on much. But that’s the thing about bolo ties. It’s tough to pinpoint much about them.

“I’ve been told no one really knows where they came from,” Romero, 28, said.

She shared a theory that pops up first on Google. In the 1940s, an Arizona silversmith claimed to invent the bolo tie after his hat blew off while riding a horse. He didn’t want his silver hatband to fall off, so he slipped it around his neck. Friends joked it looked like a tie, inspiring the silversmith to make the first bolo tie.

There’s also a theory from a decade earlier, when the owner of a New Mexico craft store was inspired to make bolo ties after noticing men from Navajo, Hopi, and Zuni tribes wearing bandanas that were clasped together with a shell or silver conch.

These stories are referenced on the website of The Faust Gallery in Arizona, which carries a collection of bolo ties alongside jewelry, pottery and paintings.

“There are several accounts of the origins of the bolo tie,” the site reads.

There’s no consensus. It could’ve been a cowboy who created the bolo tie. Or Native American silversmiths.

There’s also the story of Jack Weil, known as “Papa Jack,” the founder of the Denver-based store Rockmount Ranch Wear in 1946.

“We were the first company to commercially make bolo ties,” said Steve Weil, a grandson of Papa Jack and the CEO and president of Rockmount. “We started making them in the ’40s. I’ve never seen bolos prior to ours.”

Rockmount Ranch Wear has made “millions of them.”

“They started out as a regional thing and somehow percolated into the popular culture,” he said. “That could be due to the popularity of Western fashion overall.”

Weil recalls his first memory of the bolo tie making that shift. It was when Bruce Springsteen wore a bolo tie on the cover of Esquire magazine in the 1980s.

“People think of them as an alternative to boring neckties,” Weil said. “I find the current situation is there’s a really wide audience for bolo ties.”

Romero is adding to that. She opened her Durango storefront, Frontera Silver, in 2021 and sells bolo ties alongside other jewelry.