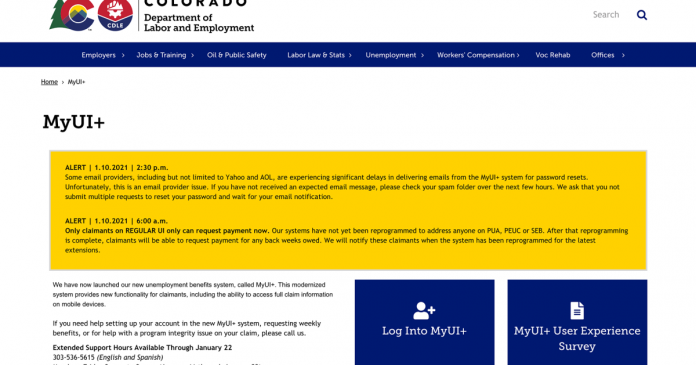 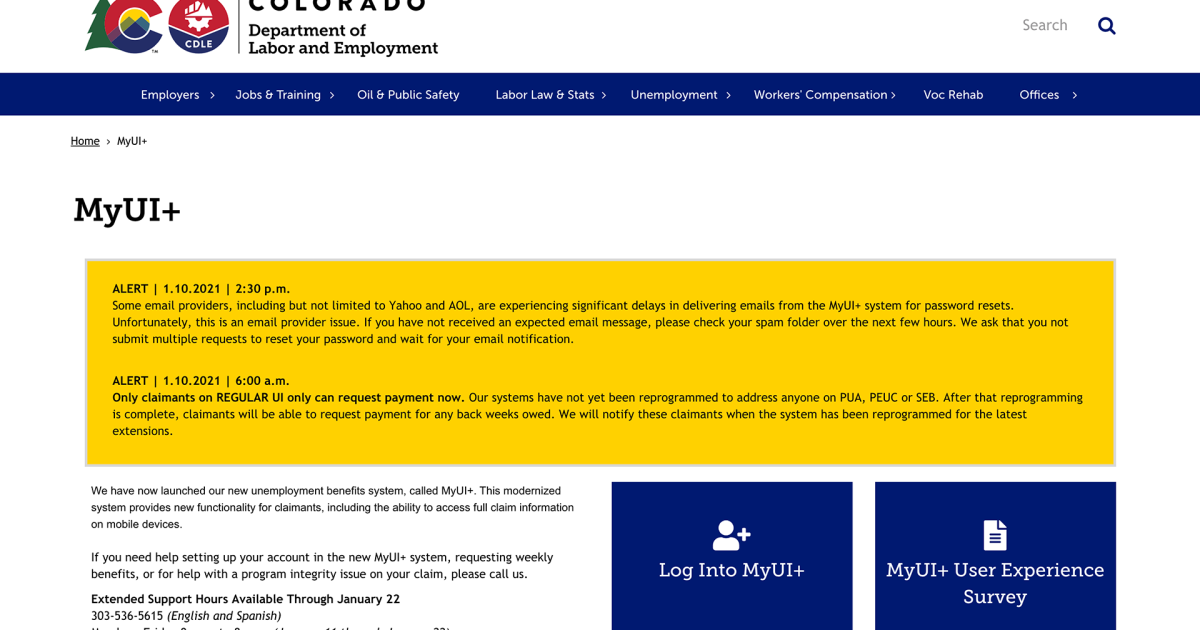 DENVER – Colorado’s upgraded unemployment insurance system flagged about 20% of payment requests made Sunday as potentially fraudulent, and the state received the full guidance from the U.S. Department of Labor that will allow them to start reprogramming the upgraded system to administer federal unemployment benefits.

The Colorado Department of Labor and Employment’s upgraded MyUI+ system came online Sunday after several days of upgrades to the old system aimed at combining the federal and regular unemployment filing and claims systems and giving people on unemployment what the state hopes to be a more “streamlined” and intuitive website and place to file claims.

The department said Monday that more than 100,000 people had accessed the upgraded system and that more than 43,000 had completed their first payment requests.

Additionally, CDLE Deputy Executive Director Cher Roybal Haavind about 20% of roughly 32,000 payment requests made Sunday were flagged as fraudulent, and the department says it is likely that “a majority” of them were fraudulent. Haavind said the department would have more information in a press call Thursday.

Included among the upgrades to the new system are more fraud triggers, some of which may temporarily delay a person being able to access their payment if their claims trigger a fraud warning, officials have said. The CDLE said last week it is working to quickly identify claims flagged as fraudulent that were not.

Jennifer Weidinger had a hold placed on her card, meaning she’s unable to use the $321 in her account.

“They want my identification verified but I’ve sent them several documents verifying it,” said Weidinger. “I understand that they’re trying to crackdown on it, but it seems like the wrong people are paying the price for it and the fraud is still happening.”

Several district attorneys, along with the CDLE, are also warning about ongoing fraud within the regular unemployment system

But many people are just now finding out they might be victims. Tom Havens checked his mail over the weekend and was surprised to see a U.S. Bank ReliaCard, which is used to distribute unemployment benefits. Havens knows he isn’t alone; his roommate previously filed a fraud claim too.

“It actually happened to my roommate who did need unemployment, and someone was already using his information,” said Havens.

He said it’s encouraging that the new system is able to prevent fraud, but he still wonders how widespread it is.

“I just hope they can get their heads around it and figure out why this is happening at such a broad level,” said Havens.

Federal benefits not yet reprogrammed into system

Though the CDLE has for weeks been sending out notifications to claimants about both the upgrades and the fact that federal unemployment insurance benefits will not be available until the state receives guidance from the USDOL and is able to reprogram the updated system, many Coloradans on federal unemployment benefits have not heeded those messages and are questioning why they are not able to file claims or requests for payment.

LeAnne Vicol applied for PUA when lost her job in the oil and gas industry last year. She qualifies for the extension and logged onto the new website in hopes of requesting a payment.

“If they don’t remedy this quickly and we continue to not get paid, how is anybody supposed to pay any of their bills or rent,” said Vicol.

Haavind said Monday that the state had received the full guidance from the USDOL on Friday after having only partial guidance on the upgraded unemployment insurance programs in the latest coronavirus stimulus package passed by Congress at the end of last month.

The department will now begin reprogramming the updated programs – including Pandemic Unemployment Assistance for self-employed people, gig workers and contractors – which it says will hopefully be done by late this month or early February.

The CDLE said in an email to PUA and Pandemic Emergency Unemployment Compensation (PEUC) again over the weekend that it would contact them when they will be able to access those programs again.

PUA and PEUC, as well as Federal Pandemic Unemployment Compensation (FPUC), which will provide $300 a week in its latest iteration to anyone receiving unemployment of any kind, will run through March 14 currently and will be backdated to Dec. 27 for people to request payments for the weeks in between then and when the program is again available in Colorado.

For now, people on regular state unemployment insurance are the only people who can file claims and requests for payment. CDLE officials said last week they expect the FPUC changes will be the first to come online in the reprogramming because it will be the easiest change to make.

The CDLE said Monday that more functionality to MyUI+ was being brought on in phases, including the ability for people to file new regular unemployment claims, which is expected to be deployed earlier this week.

More information on the new upgraded system, an upgrade that had been in the works for years and had been planned for last spring before the pandemic hit, can be found here. People can also call 303-536-5615 to try to talk to someone for help with the new system.