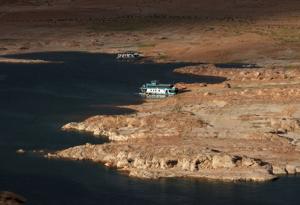 Recognizing a seven-state plan to conserve up to 4 million acre-feet of water on the Colorado River is not forthcoming, the Department of the Interior on Monday indicated it’s set to announce water conservation plans of its own.

The announcement said senior officials from the department would in a Tuesday virtual press conference address current drought conditions impacting the Colorado River and outline steps being taken to improve the long-term sustainability of the Colorado River System, including ongoing engagement with impacted states and tribes. The federal agency also plans to release a 24-month study on operating conditions for Lake Powell and Lake Mead for the upcoming year.

The news conference is scheduled for 11 a.m. MDT.

On June 14, Commissioner of Reclamation Camille Touton told the U.S. Senate Natural Resources Committee she was calling on the seven states in the Colorado River basin to come up with a plan within 60 days on how to conserve 2 to 4 million acre-feet of water in the coming year. Should the states not come up with a plan, she warned, the federal government would “act unilaterally to protect the system” under its existing authority.

According to the Los Angeles Times, negotiations have been ongoing, most recently last week in Denver, but have failed to result in a seven-state plan.

The 1922 Colorado Compact, plus a host of legal cases and other agreements in the ensuing 100 years, dictates the upper basin states of Colorado, Wyoming, Utah and New Mexico would be allocated about 4 million acre-feet per year. The three lower states of Nevada, Arizona and southern California would share about 7.5 million acre-feet per year from the Colorado River.

One acre-foot of water is 326,000 gallons, or enough water to supply two families of four for a year. The Colorado River is intended to supply water to 40 million people in the seven states, though about 80% of that water currently goes to sustaining agriculture.

But 22 years of drought have resulted in the river being overallocated and no longer able to supply the amount of water dictated under the compact.

Most of the cuts are expected to fall on Arizona and southern California. Most of Arizona’s water rights are junior, meaning last in line for water supplies.