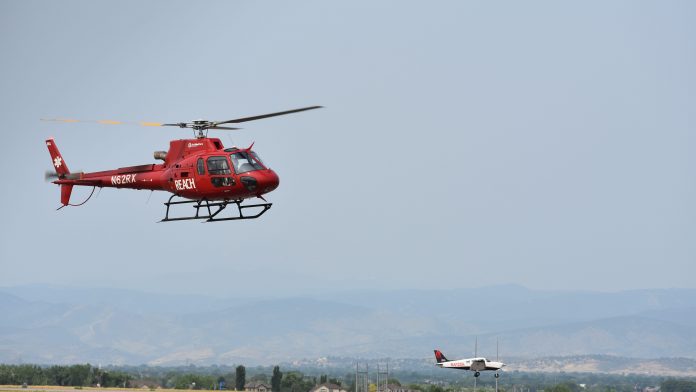 Hazy skies like we had Monday make for eerily beautiful images at sunrise and sunset that are pretty on the eyes.

The flip side is warm, stagnant air like we felt Monday increases fine particulate matter and along with wildfire smoke is taxing on lungs and hearts of those who suffer from respiratory issues.

That combination resulted in our 21st ozone action alert day of the season, according to Scott Landes, supervisor of the Meteorology and Prescribed Fire Unit of the Colorado Department of Public Health and Environment.

The designation means those concentrations can impact breathing for unhealthy and sensitive groups who suffer from heart disease or respiratory illnesses as well as the young and elderly.

Landes estimated 98% of the alerts are for unhealthy and sensitive groups while about 2% are for all people.

Both of those years were big wildfire seasons in Colorado and throughout the western U.S., which can enhance conditions for the poor air quality. Last year saw the three largest wildfires — Cameron Peak, East Troublesome and Pine Gulch — in state history.

Landes said the reason last year saw fewer action days than 2018 despite the intense days of wildfire smoke in the Fort Collins area has to do with where a smoke plume sets up as well as the intensity of the wildfire smoke and where it sets up in the atmosphere.

“In 2018, Denver and the northern Front Range got more smoke directed from out-of-state wildfires than last year,” he said. “Last year, Fort Collins was so close to (Cameron Peak and East Troublesome) wildfire smoke that it was decreasing ozone because there was not enough sunlight. There is a sweet spot where wildfire smoke can enhance ozone, but too much decreases ozone.”

He said forecasted alerts are accurate only two to three days out because of variables like where and how much wildfire smoke is directed into the state.

He said current unhealthy conditions are likely to remain well into Tuesday. A cold front moving in Wednesday will likely alleviate the conditions.

Most of the wildfire smoke currently is coming from Oregon, Idaho and northern California, with some creeping in from Colorado’s West Slope, namely the Morgan Creek fire north of Steamboat Springs.

Wildfires aren’t the only cause for alert days. He said other sources are automobile emissions and oil and gas activity — mostly from Weld County — along with naturally occurring ozone and some contribution from out-of-state sources.

The alerts cover the state’s nonattainment area that includes most of Larimer and Weld counties south to the Denver metro area. Those areas are ones that don’t meet the national standard for air quality set by the federal government.

Last year, the Environmental Protection Agency designated those areas as a “serious” nonattainment area under the 2008 ozone standard, according to the state health department website.

The state has submitted a plan to satisfy the marginal nonattainment area requirements for the 2015 standard based on the 2018-2020 ozone season data.

However, due to high ozone levels in July and August of last year, the website said the area may be reclassified as “severe” under the 2008 standard and “moderate” under the 2015 standard in late 2021 or early 2022.

City council priorities: Improving air quality is among them

How you can reduce ozone levels