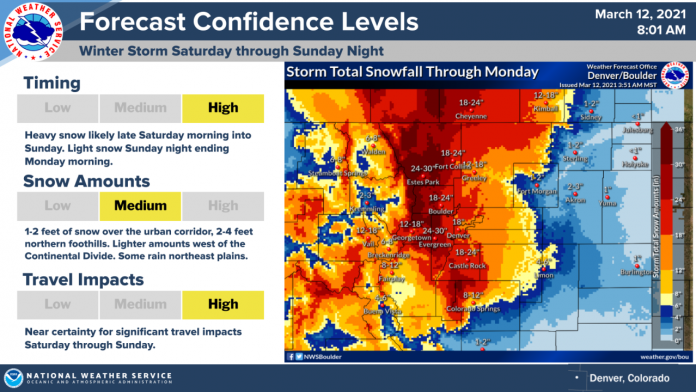 DENVER — Ready or not, snow is on the way.

And the various forecasts and models and projections are in agreement that we’re likely in for a steady, multi-day storm.

Starting late Saturday morning, we’re expecting heavy snow to begin falling across Colorado’s Front Range, including Denver, and into southern Wyoming. The storm is likely to dump snow through the weekend before clearing out of the area on Monday morning.

But if you know Colorado weather, you know nothing is certain. We could see some changes to the timing of the storm and how much snow falls where, especially if the storm pushes further to the north.

So let’s walk through, generally, what you can expect — and when — as we head into the weekend, according to our Denver7 forecast and the National Weather Service in Boulder.

We’ll see temperatures drop into the 30s, with a chance of drizzle across northeastern Colorado. Depending on how cold it gets, this could result in freezing rain, but don’t expect much, if any snow, on the Front Range, even in higher-elevation areas to the west. Some overpasses and elevated surfaces could become slick in the foothills.

Earlier forecasts suggested we could wake up to heavy snow on Saturday morning, but that will likely be delayed, at this point. The National Weather Service in Boulder on Friday expressed high confidence in timing heavy snowfall for late Saturday morning into the afternoon.

This is when we’re expecting the heaviest of the snow to begin falling across Denver and the rest of the Front Range. The National Weather Service on Friday morning was projecting 18 inches of snow in Denver and 24-30 inches into the foothills.

On Friday afternoon, some uncertainty was developing regarding how much Denver will get, as some models were forecasting the heaviest of the snow pushing further north, into Wyoming, according to Denver7’s chief meteorologist Mike Nelson.

Still, the National Weather Service in an afternoon update was sticking by its earlier projections, calling for 18-24 inches across the Denver area and heavier amounts further north, into Estes Park and southeast Wyoming.

“This storm has everything going for it,” the NWS forecast discussion said Friday afternoon.

“Despite some of the wild gyrations we’ve seen in model guidance,” the forecast discussion said, “the overall plan with this storm is still the same. In fact, the latest EC and GEM ensemble data suggest about the same evolution, if not slightly higher totals, than previous runs.”

The NWS pointed to several factors with the storm, including heavy moisture and a strong upslope flow during the day Saturday.

Read more about how upslope flow will impact this weekend’s storm.

The NWS earlier Friday did float the possibility of some discrepancy between forecast models, depending on the track of the storm going more to the north or more to the south.

If the storm pushes north, then a “dry slot” could lead to less snowfall in the Denver area, but the NWS forecasters said “the confidence of this happening is quite low at this time,” according to the forecast discussion.

What does this mean for Denver? We’re still likely to see heavy snow, possibly in the range of 1-2 feet, but the heaviest dumping will probably be further north, toward the foothills and into Wyoming.

Overall, the main uncertainty is how far north the storm pushes and the impact that could have on the amounts we see here in Denver.

[Update] A significant winter storm is still on track to impact the Central Rockies/central High Plains this weekend, bringing as much as 1 to 3 feet of snow to portions of the region. pic.twitter.com/wQcjopp4hY

The heavy snow, once it starts Saturday, is expected to continue across the Front Range into Sunday.

A strong ridge over the Gulf of Mexico indicates the storm system will move slowly across northern Colorado and southern Wyoming, keeping snow showers in the area for nearly 48 hours.

The snow is expected to taper off through Monday, with temperatures nearing 40 degrees and the possibility of some sun.

Track the storm and snow totals in real time by watching the Denver7 24/7 weather stream: