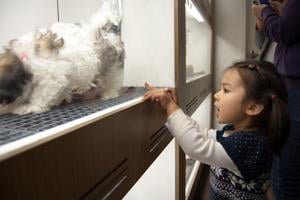 The Colorado Springs City Council is headed for a battle Tuesday on whether to ban the sale of commercially bred dogs and cats in pet stores.

The coming council vote follows the failure of the state legislature to pass a measure that animal advocates feel would bring meaningful change and years of advocacy by local proponents who want to help cut off the local market for dogs and cats from commercial breeders, such as out-of-state puppy mills. Some large scale breeders do not maintain humane conditions and that can contribute to illness and congenital conditions in dogs, proponents argue.

Council President Tom Strand said Monday the city needs to act because the state passed a weak law that only requires pet shops to post the price of the dogs and cats, financing information and a license number of a breeder.

“This three page act does little or nothing,” he said.

If the council approves a ban on commercially bred animals it would only impact the two Pet City stores at the Chapel Hills and The Citadel malls in town.

Those stores would have until July 2022 to phase out their commercial pet sales. The local law would allow them to offer pets from the Humane Society of the Pikes Peak Region and other rescues. Proponents also say the shops could transition to business models focused on pet supplies.

However Chapel Hills Pet City owner Dustin Haworth said the stores could not make it if the city ban passes because 80% of the stores’ sales are animals, including dogs, cats and other pets.

If the shops brought in dogs and cats from the rescues they could not profit on those animals, said Bree Maestas, owner of the Citadel Pet City. She also said she might not be comfortable with those animals.

“I don’t know if I morally agree with obtaining my animals from unknown places, unknown backgrounds,” she said.

“I hope the city council moves back to where we were over the last 18 months working on transparency and reasonable restrictions,” he said.

Animal advocates have tried to work collaboratively with the Pet City owners on a compromise, but it fell apart, said Vicki Allinger, the Colorado team leader for Bailing Out Benji, a group that focuses on the puppy mill-to-pet store connection.

The group was not satisfied with the Pet City’s purchasing dogs from the Canine Cares certified breeders because the program does not make any of its inspection reports public so there is no way to know if the program is holding breeders to a higher standard than the federal government, she said.

She noted that most pet stores can be profitable without selling dogs from commercial breeders. For example, PetSmart and Petco don’t use breeders.

The ban her group is backing has held up elsewhere with five states and 400 local governments enacting similar restrictions, she said.

Animal advocate Pam Horton said she hoped to see the ban pass after caring for seven Italian greyhounds that suffered physically and emotionally from their time as mothers in puppy mills. Her dogs lost teeth, eyes and bone because of the abuse and neglect they suffered.

“They have no regard for these dogs as living beings that feel things that can be in pain and can be scared,” she said.