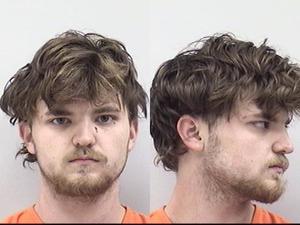 A Colorado Springs man shot and killed a 17-year-old driver during a marijuana deal Sunday evening, an arrest affidavit filed by police shows.

James Thomas Lloyd, 18, was arrested on Monday by Colorado Springs police in connection with the shooting death of Matthew Terry, 17, on Sunday, police said in a Monday release. Terry was identified as the victim of the shooting by the El Paso County Coroner’s Office just after noon on Wednesday.

Officers responded to 1059 Mazatlan Circle in east Colorado Springs Sunday at around 7:30 p.m., where they found a white Toyota sedan parked on the curb with both front doors hanging open and shattered glass littered around the ground, according to the affidavit.

Partially leaning out of the car, officers said they found the bloodied body of Terry, along with a bullet fragment lodged in the interior of the front passenger door.

At his feet, according to the affidavit, they found two cell phones and a black revolver, and on the floor of the front passenger seat they found a sandwich-sized bag filled with marijuana.

Detectives interviewed another teenager, a 15-year-old unidentified in the affidavit, who told police the two had been “hanging out” when Terry received a Snapchat message from someone the teenager didn’t know, arranging a deal for marijuana.

When the two arrived at the arranged meeting spot, the teenager told police they saw a white man with dark blonde hair and a scruffy beard — later identified in a photograph lineup as Lloyd — standing by a nearby foot bridge, and pulled next to him. The teenager said Lloyd asked if Terry had the drugs, but when Terry replied that he did and asked if Lloyd had the money, Lloyd dodged the question.

The teenager said Lloyd then ran south on foot, prompting him to unsuccessfully attempt to get Terry’s Toyota in gear and escape, according to the affidavit. The teenager, fearing Lloyd might return and shoot him, told police he eventually gave up and ran away as well, leaving his jacket and iPhone behind.

Lloyd was arrested later that evening, on a call from one of his neighbors alleging that Lloyd had fired a gun while cleaning it in his apartment, sending a bullet through his and his neighbor’s wall, the affidavit states. He was then taken to the police operations center, and following a positive identification of Lloyd in a lineup of photographs of other people as the man who shot Terry, Lloyd was arrested for first-degree murder, according to the affidavit.

When told of the allegation of murder, Lloyd told police he felt he had to tell the truth, and admitted to pulling the trigger. He told police that after killing Terry, he dumped his gun off a bridge over Spring Creek, near the south edge of the Valley Hi Golf Course.

When asked why he would point a gun at Terry, according to the affidavit, Lloyd replied that he was “short on cash and ‘product,’” and that he’d “made a lot of enemies.”

Lloyd is currently being held at the El Paso County jail with no bond, according to jail records. He’s set for a first appearance hearing in court on Nov. 30, according to court records, and faces charges of first-degree murder, felony menacing and illegally discharging a firearm.

Police said in a Wednesday release that Terry’s death marks the city’s 39th homicide investigation of the year. The department added they had 36 such investigations recorded by this time last year.