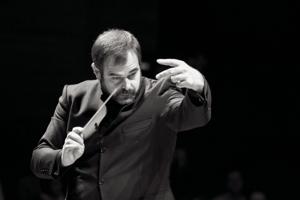 Colorado Springs Philharmonic will lose music director and conductor Josep Caballé Domenech at the end of its 2022-2023 season.

“It was a surprise to us,” said philharmonic president and CEO Nathan Newbrough. “We’re saddened by it. He’s had the second longest tenure as music director of anybody we’ve had. He has made enormous progress artistically with this orchestra.”

Last weekend’s “Comeback Celebration” concerts were the first Domenech has conducted since 2020, when the pandemic forced the shuttering of the season. Later that year, the philharmonic’s board of directors voted to cancel its new five-year contract with the musicians’ union due to the coronavirus. Eighteen months of a contract dispute ensued, until philharmonic management and the Pikes Peak Musicians Association agreed on a three-year deal in October.

As a freelance symphony and opera conductor, Domenech joined the philharmonic in 2011, after a year-long search for a replacement for former music director Lawrence Leighton Smith. Now in his 11th season with the symphony, Domenech will say farewell after the May 2023 concert, marking a dozen years at the Pikes Peak Center podium.

“I’m incredibly sad right now,” said philharmonic concertmaster and violinist Michael Hanson. “I was kind of shocked to hear about this. He always expected a high level of precision. He makes sure it’s of the highest level in terms of excellence and performance.”

Bass trombonist Jeremy Van Hoy, chairman of the philharmonic’s players committee, points to the contract dispute as a reason for Domenech’s departure, and said his resignation letter, sent to board members, the players’ committee and others, reflected his disagreement with management’s decisions.

“Josep has been committed to the mission of this organization, which is to present professional live classical music to Colorado Springs,” Van Hoy said. “He references (in the letter) our failure to follow that mission. He disagreed with the contract cancellation and thought we should have found a way to keep working in the pandemic and into 2021.”

In addition to his philharmonic duties, Domenech has nurtured a noteworthy conducting career in Europe, including tenure as chief conductor of Germany’s Moritzburg Festival Orchestra since 2018, general director of the Halle Opera and Staatskapelle in Germany from 2013 to 2018, and artistic director of the Bogotá Philharmonic Orchestra in Colombia in 2018. He also is a frequent guest on stages throughout the U.S.

Domenech is the ninth music director in the philharmonic’s 95 years. Only Charles Ansbacher stayed longer.

“Josep has had the most impressive artistic output of any conductor of the orchestra,” Newbrough said.