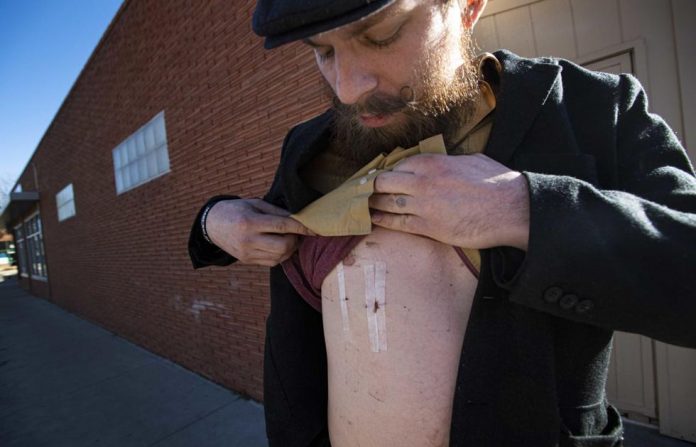 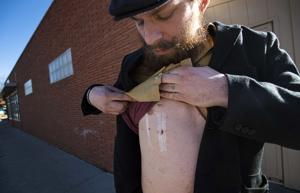 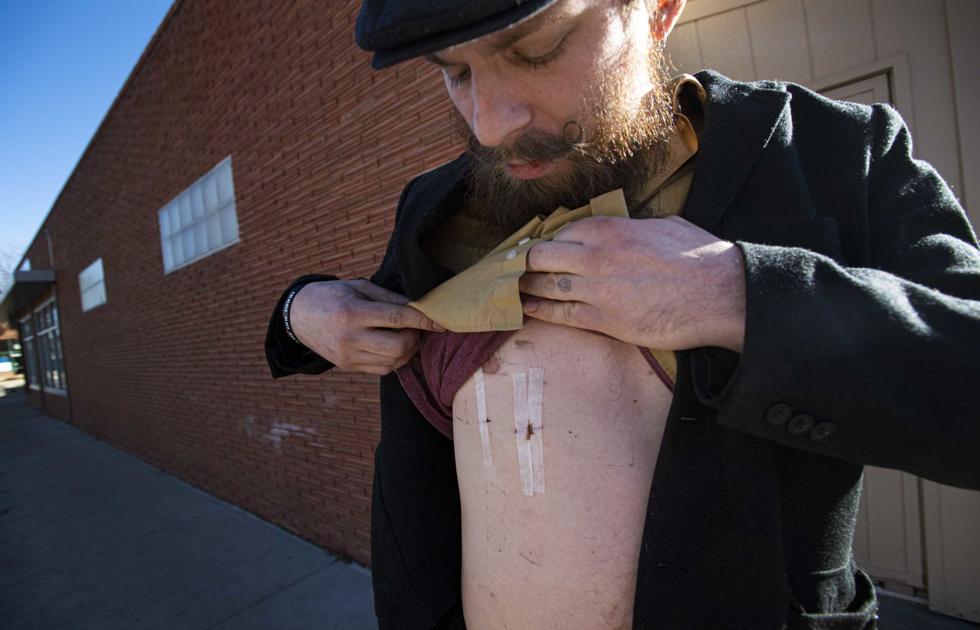 A 30-year-old man, stabbed twice in the ribs during Monday’s downtown knife rampage, said he pried the assailant’s hand off the weapon, finger by finger, putting an end to the attacks that left seven other people wounded.

Cody McEntyre’s account on Tuesday came as police continued to withhold details about the man taken into custody in connection with the 40-minute series of attacks spread over a mile and a half from the west side to the heart of downtown.

McEntyre said he left a North Tejon Street bar after it closed about 2 a.m. and saw a man approach two other men who had stepped outside to smoke cigarettes near the corner of Tejon and Boulder streets.

The assailant, who had a bushy black and gray beard, was “irate,” McEntyre said, and yelling, “Do you believe in God? Jesus will be your salvation.”

McEntyre said he walked toward the group, as the man quizzed the others about their religious faith. When McEntyre was about 4 feet away, the man lunged toward him and jabbed a knife into his ribs, he said. The blade entered a few inches before the assailant pulled it out and stabbed him again, McEntyre recalled.

“I looked down; I thought he just punched me at first and then I felt it burning,” McEntyre said.

He lifted up his shirt and saw the blood dripping onto the sidewalk and realized he had been stabbed. “It was pouring out pretty good,” he said.

As the knife-wielding man turned toward the other men, they tackled him to the ground, McEntyre said.

“That’s when I saw the knife,” McEntyre said, describing the 5- to 6-inch blade.

As one man stayed on top of the assailant, he was stabbed in the shoulder, McEntyre said, adding that while the man was down, he stomped on the assailant’s head twice, trying to knock him out.

The two men screamed, “Somebody call the cops. We need help. We have been stabbed,” McEntyre recalled.

Pinned to the ground, the assailant continued to waive his knife, aiming it at the throat of the man holding him down, missing and stabbing his head, McEntyre said. The third man’s finger was sliced in the attack.

While the other two men held down the assailant, McEntyre said he pulled back the man’s arm and straddled it. He grabbed the man’s hand and tried to peel away his fingers that were tightly gripping the knife.

But he wouldn’t let go.

“I was prying each one of his fingers off, all the way down to his pinky. He was still holding on,” McEntyre said.

He eventually got a hold on the knife and the two other men continued to fight the assailant on the ground. Shortly after, police arrived.

McEntyre initially refused to go to the hospital, but an EMT encouraged him to get in an ambulance, he said. Doctors cleaned his wounds, which he was told were inches from his lungs and applied butterfly bandages. He left about 4 a.m.

None of the victims’ injuries were life-threatening, said Lt. Jim Sokolik, a police spokesman.

As of Tuesday evening, two of the seven people taken to UCHealth Memorial Hospital Central after the attacks remained hospitalized, said Cary Vogrin, a hospital spokeswoman. She could not provide information on their conditions.

Lear, 44, recalled leaving the bar with a few other people and seeing the assailant walking toward him from the west.

“He didn’t seem necessarily threatening at first,” Lear said. The man, wrapped in a white blanket, asked the group if they knew Jesus and if they had been saved, he said.

Lear said he didn’t realize the man had a knife until he saw blood on the ground after McEntyre had been stabbed. Then, Lear saw the knife-wielding man stab his friend in the head.

“He kept stabbing him in the head. I thought he was going to kill him,” Lear said of the assailant.

Lear said he got on top of the assailant while others ran to the bar to ask for help.

Lear, who lives downtown, said he doesn’t feel unsafe walking downtown, but sees the attack as an example of increased violence downtown.

“There has been a lot of crazy stuff going on, more and more, in this area. Gunshots and people getting robbed and stabbed,” he said. “I’ve got quite a few friends that don’t leave their house without bringing a gun, unless they are going to a party or something like that.”

McEntyre said his biggest concern after the attack was about the risk of disease.

“Honestly, one of the biggest things I’m worried about is that I was stabbed with a knife that was used to stab seven other people,” he said.

As he recounted the attack, he said he was grateful he had help stopping the assailant from hurting others.

“I’m just happy the other two guys were there because without them, I’m pretty sure it would have ended up a lot worse,” he said.

Before leaving the hospital Monday, McEntyre said he ran into one of the men who helped tackle the assailant. Both were “astonished” about what had happened, he said, but were in “good spirits.”

“We had a good laugh about it. We are blood brothers,” he said. “I’m sure we will be back downtown to celebrate.”