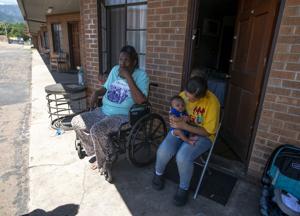 Two and a half years after opening, Colorado Springs’ only stand-alone shelter for homeless families is closing.

“Every child deserves a home, and families experiencing homelessness need a voice,” she said. “When our kids don’t have a safe home to grow from, it impacts us not only every day now but also 20 years from now.”

The shelter, a program of Interfaith Hospitality Network, which is supported by some 30 churches and other contributors, began scaling back expenses last fall, after donations dropped by $150,000 from the previous fiscal year.

Interfaith Hospitality Network last year closed its nearly 25-year-old Day Center on North Tejon Street for homeless families. The center was part of its flagship program, in which local churches fed and housed families at night on a rotating basis, until the COVID-19 pandemic suspended operations.

The organization laid off some employees last October, and further reductions occurred in May.

“That’s caused extra struggle and stress in providing all the services,” Karr said. “The most responsible thing to do seemed to be to scale down in order to regroup, re-strategize and build back up.”

The shelter opened in early 2020 in a renovated motel on South Nevada Avenue with 15 units. Under a “low-barrier” model, participants received housing before addressing other issues, such as substance use.

Since then, about 350 children under age 18 and nearly 275 adults have used the program, which provides assistance with housing, food, supplies such as diapers, treatment for substance use, employment and living skills. About 36% of all participants have moved into permanent housing, Karr said.

The program has been unique in keeping family units together, Karr said, as they work to save money and secure stable housing elsewhere.

Resident Jeffrey “Ocean” Kelly said Tuesday that the setup been an important lifeline for his family, which includes his girlfriend and their two young children.

Four months ago, they were living in their car in Colorado Springs, and she was six months pregnant.

“It had been months since we’d slept in a bed, had running water and a shower,” he said. “This place is awesome — it has literally saved us. I don’t know where we’d be without it.”

But need has outpaced the shelter’s ability to meet increasing demand born from the pandemic and the city’s shortage of low-income housing stock, Karr said.

Donations to the shelter had been covering up to 60% of its budget, Karr said. That dropped to about 30%, she said, for this fiscal year’s budget of $1.2 million.

At this late stage, leaders are trying to rally support, as they look toward keeping the organization going and reverting to the Interfaith Hospitality Network’s original model of a “high-barrier,” or clean and sober, temporary center for housing three or four families.

Family Promise has been leasing the motel property, Karr said, and likely would lease a house to provide a smaller operation.

Urban renewal projects line the South Nevada Avenue corridor, which in recent decades became run down and known for illegal activity, including prostitution and drug sales.

Some of the older, inexpensive motels and businesses have been demolished to allow for new restaurants and shops.

The uncertainty of the business sector was one reason the organization did not pursue buying the old motel, Karr said, as some residents said they didn’t feel comfortable in the neighborhood.

Other shelters and housing programs are stepping up to accept the eight remaining families at the shelter.

“Organizations are coming together to help those families exit there so they aren’t at risk of being on the streets,” said Mary Stegner, executive director of Partners in Housing, which provides one year of transitional housing and support services to homeless families.

“It’s a loss to the community that there aren’t enough resources that are primarily serving families,” she said.

Lisa West, her adult children and her grandchildren have been staying at New Promise for seven months and have not yet found a place to go.

The family’s housing crisis started after West’s husband was murdered, she said, and with a special-needs’ son and her daughter delivering a premature baby two months ago, moving into a stable environment has been tough.

But New Promise has provided the community they’ve needed, she said.

“We had literally nowhere to go,” West said. “It’s hard to get back on your feet, but these people really try to help you, and you’re all in the same situation.

“We’re not here because we want to be.”

“I’ve been homeless five years and here three months,” she said. “So many people rely on this program. I’m praying and hoping it survives. It’s very sad to see it close.”

‘God’s still in the miracles business,’ says author and other receivers and believers of supernatural events

A few kids were shooting hoops in the motel’s secluded parking lot on Tuesday. A large tree shelters a play area with donated bicycles and toys. Tomato plants flower in the community garden that’s growing in front of a colorful mural.

Residents use the community kitchen to prepare their meals and take classes, and a family room offers games and other diversions.