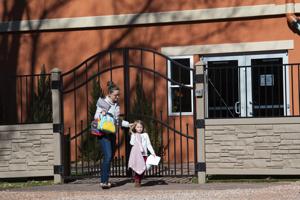 In a week’s span, state authorities shut down three unlicensed day care facilities run by the woman who was found hiding 26 toddlers behind a false wall in her home last week.

The state has since suspended its day care license for Carla Faith, 58.

On Nov. 8, the department received a complaint alleging Faith was providing care to children without a license at 1319 Franklin St., said Madlynn Ruble, a spokeswoman for the department.

After an investigation found children at that location, a cease and desist order was served, Ruble said. She was unable to confirm how many children were there.

According to a DHS inspection report, the young children “appeared not to have a diaper change, a nap or sufficient meal.”

Police arrested those three workers on suspicion of misdemeanor child abuse relating to neglect, but the charges have been withdrawn, said spokesman Lt Jim Sokolik. There have been no allegations that any of the children in Faith’s day care centers have been mistreated, and Faith, 58, has not been arrested.

Inside another building on the property, which was not licensed to provide care, DHS investigators found 10 children under the age of 3, Ruble said.

Faith’s license, which was issued in 2005, was immediately suspended after the investigation.

The next morning, parents flooded the parking lot of Counterpoint School at 610 E. Willamette Ave., also licensed to Faith, to pick up their children amid news that Faith’s license was temporarily revoked.

Later that day, DHS received another complaint of unlicensed care at 814 Willamette Ave. After an investigation, the department confirmed Faith was providing unlicensed care to five children at that home, too, Ruble said.

Police, who DHS called to help assist in the welfare check, issued a summons for child abuse and neglect for employee Christina Swuager, 35, after “unsecured marijuana” was found at the home, Sokolik said.

The two licensed facilities have also been closed. DHS will continue to investigate complaints it receives regarding unlicensed care, though Ruble said she was unaware of additional complaints made against Faith.

The latest licensing violations in Colorado Springs aren’t the first for Faith.

Authorities shut down several of her child care homes in California, the Los Angeles Times reported in 1998. In one unlicensed facility, investigators found 44 small children.

Records show that three incidents, dating back to 1991, were referred from the licensing office to California’s Department of Social Services’ investigations bureau, said Adam Weintraub, a spokesman for the department.

Two were related to alleged licensing violations and one was related to providing services that required license without a license.

DHS said it has “no requirement or ability” to access licensing history or child abuse and neglect records in other states.