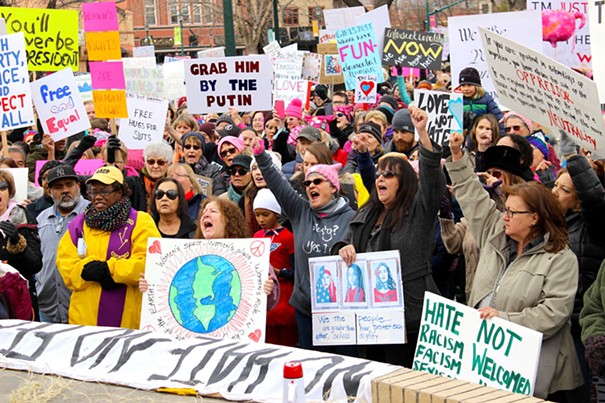 Spaulding acknowledged that local turnout in 2019 was lower than for the inaugural year, when the first-ever such march galvanized supporters of women’s rights across the country in protest of the new president, Donald Trump. The 2017 Colorado Springs march drew an estimated 7,000 people, making it the largest public action in the city’s history.

But, Spaulding said, the marchers still had plenty of work to do.

She launched the crowd into a rousing chant: “Today we march, tomorrow we work!”

For the fourth year in a row, organizers of the local Womxn’s March expect to fill the streets of downtown Colorado Springs with people rallying for progressive causes.

Given that 2020 is an election year, they believe more people will attend than the 600 who participated in 2019, according to youth organizer and activist Emma Tang.

The local march hasn’t been affiliated with the national Women’s March movement since the kickoff in 2017. (One key difference between the local and national events: The “x” in “Womxn,” which Colorado Springs organizers added last year to signal inclusion of nonbinary and transgender supporters, Tang says.)

Why not? Nationally, the Women’s March — which drew hundreds of thousands to Washington, D.C., in protest of Trump’s inauguration back in 2017 — hasn’t had the smoothest few years.

Most notably, Tamika Mallory, the former co-president of the national march, refused to denounce her support for Louis Farrakhan, the Nation of Islam leader who expresses anti-Semitic and homophobic views. Mallory has also been criticized for supporting hip-hop mogul Russell Simmons, despite sexual assault allegations against him.

An early organizer of the national march, Vanessa Wruble, told The New York Times in late 2018 that she felt her Jewish identity played a role in her dismissal from the organizing team.

Then there was the controversial (and later abandoned) attempt by the national organization to trademark “Women’s March,” which organizers defended as necessary for protecting the movement’s brand and principles.

Since the first march in 2017, many such events have branched out from the national organization, even as it tried to stress inclusivity and diversity, and even though three of the original founders — including Mallory — stepped down last summer.

For instance, Womxn’s March Denver has also cut ties with the national organization and has been organized at the grassroots level. Last year, that event drew 80,000 people despite criticism from some groups that said the organizers didn’t make adequate efforts to include people of color, the Denver Post reported at the time.

Back in 2017, the march was born as a way to defend women’s rights, including access to reproductive health care, which supporters felt was threatened by the Trump administration. It was also an attempt to punch back against Trump’s sexual abuse of and sexist remarks toward women.

Take, for example, the ubiquitous “pussyhat,” inspired by Trump’s infamous “grab ‘em by the pussy” remark made in 2005 on the set of a television show. (The original pink hat with cat ears has since been criticized for excluding women of color and transgender women.)

But even that first year, march organizers said their protest went further than just women’s rights. Rather, they hoped to address a range of political issues.

“Yes, it’s about feminism,” Wruble told Vogue in 2017, before the first march and her public break with the organization. “But it’s about more than that: It’s about basic equality for all people.”

This year in Colorado Springs, Womxn’s March organizers are taking that ethos a step further. They plan to host “action trainings” after the event’s speeches and performances. Participants can break into groups to learn about topics that interest them — including immigration; climate change; how to be an ally to black women; reproductive justice, health and rights; gun rights and violence; and supporting LGBTQ youth. Action training leaders will teach participants how to get involved in the issues that interest them.

The march itself will be led by indigenous women from the community.

Other groups in the coalition include Pikes Peak Progressives, Mothers Out Front, United Court of the Pikes Peak Empire, the NAACP, All Souls Unitarian Universalist Church, and the Atheist Community of Colorado Springs.

Colorado Springs Feminists is leading the coalition, Grandorff says, and the campaign to elect Jillian Freeland to the U.S. House has been a “key contributor.”

“The march focuses on harnessing the political power of diverse women to create transformative social change,” Grandorff explains via text message. “…We are committed to dismantling systems of oppression near and far through nonviolent resistance and building inclusive structures guided by self-determination, dignity and respect.”

Ahead of the Jan. 25 march (which starts at the City Auditorium), the organizers are hosting a sign-making and crafting party Jan. 18 at All Souls Unitarian Universalist Church on Tejon Street. There, attendees can meet one another before the main event, and purchase baked goods to help raise money.

“Come with your own opinions,” she says, but make sure you’re working to benefit all marginalized groups, not just your own: “Keep it intersectional.”

In a way, that’s what Kristen Faith aims to do as the event’s official emcee. Faith, who founded local nonprofit Break the Silence Against Domestic Violence, says she intends to focus on women’s rights and equality while steering clear of explicitly mentioning Trump.

“My message will absolutely be about peace and love and not about politics, not about the president,” Faith says.

She acknowledges that she can’t stop others who want to go that route.

“All I know is that division doesn’t create unity, and so for us as a community we need to come together and put politics aside — although it’s a huge part of many of the issues that are currently in the headlines,” Faith adds. “…As a woman and as an activist, my goal is to really create this messaging, this synergy of: ‘We need to come together to make a difference.’”

She says she hopes to see more men attend the event this year to show their support.

Liz Rosenbaum, co-founder of the Fountain Valley Clean Water Coalition and a candidate for state House District 21, is looking forward to attending the event. She’s hoping the march encourages women and people from the LGBTQ community to run for political office.

She stresses the importance of getting involved in one’s own community.

“I think local issues are of greater importance than national issues — that’s just my viewpoint — because if we can’t fix what’s going on locally, we’re never going to make an impact nationally,” Rosenbaum says.

And for Rosenbaum, like Tang and Faith, the march is “more than just a protest.”

“We always have a reason to be pissed off,” she explains, “but I look at it as a reason for us to get together and celebrate our accomplishments, and break into other areas where women are not being viewed as contributing members of society.”