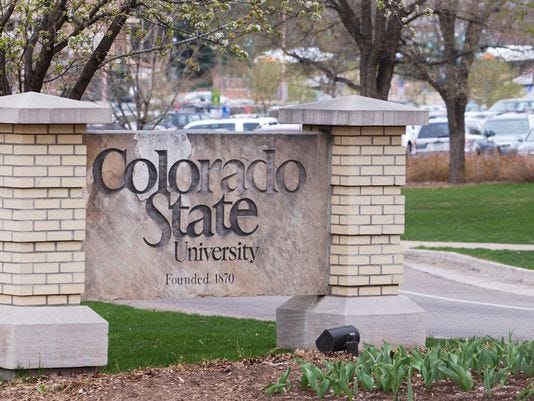 Colorado State University didn’t see as significant an enrollment drop this fall as it had expected given the uncertainty of how the COVID-19 pandemic would impact instruction.

The biggest drop was among incoming freshmen, with their enrollment down by 11.9%.

That was offset by a smaller-than-expected decrease among continuing students and slight increases among those working on master’s and doctorate degrees. Overall enrollment for graduate students was down just 0.8%, or 28 students.

“I think we’re very encouraged that the declines were not as great as we were anticipating,” said Mary Pedersen, the provost and executive vice president for the Fort Collins campus.

CSU-Pueblo set a record for its 68% freshman retention rate this fall, up 5% from last year, campus provost and executive vice president Mohamed Abdelrahman told the board.

Overall, CSU-Pueblo saw similar declines to Fort Collins, with enrollment dropping 3.3% to 3,716, and the number of incoming freshmen dropping 10% to 568. New graduate programs and a 67% increase in its online-only enrollment kept the overall drop from being as significant as some had feared.

Administrators on both the Fort Collins and Pueblo campuses were bracing over the summer for enrollment drops of 5% to 10% or more while struggling with decisions about whether to re-open for in-person instruction or not, and if so to what level.

Both are offering a mix of remote, in-person and hybrid instruction – classes that have both remote and in-person elements – this fall.

Joyce McConnell, president of the Fort Collins campus, said more than 60% of classes this fall had at least some in-person instruction during a recent town hall meeting with Fort Collins’ deputy city manager and Larimer County’s public health director.

“We’re proud of how hard our universities have worked to support students and employees in returning to campus this fall, despite the enormous challenges of reopening during a pandemic,” CSU System Chancellor Tony Frank said. “These numbers reflect that extraordinary effort as well as what we’ve heard anecdotally: A majority of our students want to be back and are continuing their progress toward a degree. We want to support that as much as we possibly can.”

Total enrollment on the Fort Collins campus dropped by 1,029 students from the previous fall’s 28,864, with 1,010 of that decline at the undergraduate level, according to figures Pedersen presented to the board.

The number of incoming freshmen dropped by 648 from fall 2019, and the number of undergraduate transfers fell by 301 students despite an unexpected increase of 206 out-of-state transfers through the Western Undergraduate Education program, which offers discounted tuition and fees to residents of several other Western states.

A substantial decline was also seen among international students, down 18.6% or 346 students.

Minority enrollment was relatively flat, dropping by just 10 students to 6,808.

Related:CSU plans to test up to 3,000 a day for COVID-19 through saliva test

CSU-Pueblo saw a slight increase in its racial and ethnic diversity, with minority students making up 47% of the total enrollment this fall compared with 46% last fall, Abdelraham said. The university also increased its geographic representation and now has students representing 48 states and territories and 28 countries.

CSU Global, which operates fully online, saw a 4.5% increase in its enrollment during its most recent trimester, president Pamela Toney said. But the university is seeing a drop this month as it starts a new session. She attributes that drop to parents with children learning remotely at home no longer having time to take their own online classes and companies cutting back on job training and tuition reimbursement for employees during an economic downturn.

CSU Global’s international enrollment grew significantly from 73 students last fall to 433 this year. Most of those students are U.S. citizens living abroad.

Rick Miranda, the chief academic officer for the CSU system and former provost on the Fort Collins campus, cautioned that the enrollment numbers and demographics shared with the board were still “preliminary.” Final figures for the fall semester, he said, will be available at their next scheduled meeting Dec. 3-4.

The number of students choosing to defer their enrollment by a semester or entire year “more than doubled,” with an increase of several hundred. Their return, he said, could “lead to a sort of nice, healthy enrollment bubble” next spring or fall.

Kelly Lyell is a Coloradoan reporter.