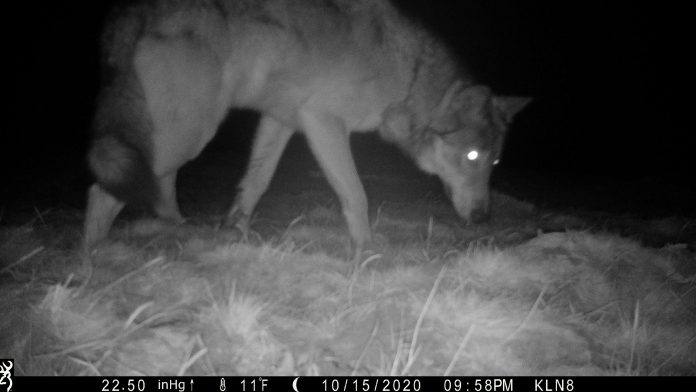 A pack of six wolves was first spotted in October of 2019 and confirmed in Moffat County in January by Colorado Parks and Wildlife. Tracks and fur were found throughout the summer and last week images from Defenders of Wildlife trail cameras captured the two wolves. Howling recordings by CPW staff confirmed their presence.

“These photos are a rare glimpse into the lives of Colorado’s few wolves,” said Karin Vardaman, manager of the Working Circle, a coexistence-focused initiative led by Defenders of Wildlife. “Monitoring these wolves is crucial to understanding their patterns of behavior so we can help prevent human-wildlife conflict and better protect them.”

CPW spokesperson Rebecca Ferrell said the agency does not have a definitive population number of wolves in the state. She said photo evidence shows four to five wolves in June but one to two in the past month.

CPW Director Dan Prenzlow said staff will continue monitoring the area and the agency will share information updates to help clear up any misunderstanding of wolf activity in Colorado.

Earlier this month, Colorado voters narrowly passed Proposition 114 by a 50.9% to 49.1% margin to reintroduce wolves west of the Continental Divide by the end of 2023. Colorado became the first state wherein voters determined to reintroduce wolves. In other states where reintroduction has taken place, federal wildlife biologists working under the Endangered Species Act reintroduced wolves.

The U.S. Department of Interior announced. Oct. 29 that it would remove wolves from protection under the Endangered Species Act. The rule was published Nov. 3 in the Federal Register and will become finalized after the 60-day window Jan. 4.

That’s when the transfer of management of wolves will go from the federal government to CPW. However, CPW said previous federal rules delisting gray wolves have routinely been litigated once finalized.

“The federal delisting discussion has caused some confusion in the state about the status of gray wolves in Colorado,” Prenzlow said in a news release “Regardless of the listing status, gray wolves remain listed as a state endangered species, and killing a wolf in Colorado for any reason other than self-defense remains illegal.”

There have been reports of members of the Colorado pack being killed just across the border in Wyoming, where it is legal to kill wolves.

Ferrell said CPW staff leaned in May that some wolves were taken in Wyoming near the Colorado border in March, but “it would be speculative to say that wolves killed in Wyoming are part of the pack regularly seen in Colorado.”

Wolves have largely been absent from Colorado since the 1940s aside from sporadic reports of wandering lone individuals.

Wolf wars: Pros and cons of the predators

How to report a wolf sighting

Colorado Parks and Wildlife urges people to contact the agency immediately and fill out a report if they see or hear wolves or find evidence of wolf activity in Colorado. The Wolf Sighting Form can be found https://cpw.state.co.us/learn/Pages/Wolf-Sighting-Form.aspx.