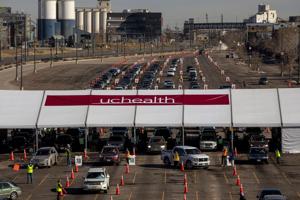 Longmont resident Jack Taylor woke up Saturday knowing he was going to be headed to an exciting day at Coors Field.

The trip wasn’t for a Colorado Rockies game or a concert. It was to take his 87-year-old mother, Marge, to an appointment to receive her first dose of the COVID-19 vaccine, which gave Taylor a reason to feel relieved for the first time since March.

“We received a notification a few days ago that she could receive the vaccine today and I immediately signed her up,” he said. “This is super exciting and I feel like as a society we are finally on the path to getting everything back to normal.”

Thousands of seniors from all around the metro area came to Coors Field on Saturday as UCHealth hosted a large-scale COVID-19 vaccination event. Although the first shots not being given until 8 a.m., hundreds began to line up by 5:30 a.m., said Dr. Richard Zane, UCHealth’s chief innovation officer.

Many people after receiving the vaccine clapped and yelled with happiness, some cried, while others took a picture to commemorate the event. But for Denver resident Judith Mackay, it meant a little more.

“I’m just so glad that I’ll soon be able to play with my grandkids again,” Mackay said.

Throughout the day, people trickled into the parking lot that’s designed to be full of baseball fans. A total of 5,000 people had appointments on Saturday and the average time spent at the site was around 21 minutes, Zane said.

“We got out practically before we were supposed to get in, it was that fast,” said Littleton resident Robert Hild.

Hild and his wife tested positive for the novel coronavirus in 2020, and for them to be “three weeks away from being home free” kept them optimistic.

When Coloradans arrived for their scheduled appointment, they were met by one of over 200 UCHealth workers, who directed them to one of 18 different tents to receive the vaccine.

Around 11:30 a.m., Gov. Jared Polis arrived at Coors Field — one of several stops he was scheduled to make at vaccine clinics this weekend — to observe the large-scale operation and talk to several recipients of the vaccine.

Polis said he was impressed by UCHealth’s innovative event and that Denver was the perfect spot for it.

“The population of the Denver metro area allows for this kind of large site, which is currently doing about 5,000 a day, and we might even be able to increase that if we get more vaccines in,” Polis said.

Following the event at Coors Field, Polis went to Salud Family Health Centers in Commerce City to receive the vaccination himself. He said it was important to show Coloradans that he followed his own words of advice.

“Since I’ve been telling everybody ‘Of course you should get the vaccine when it’s your turn,’ I am going to put my arm where my mouth is,” Polis said.

“I just want to lead by example. It’s no big deal. It doesn’t hurt.”

Polis, 45, said he received the vaccine because he is among about 200 people who were given priority access to ensure continuity of government.

Staff at the clinic cheered after Polis received the vaccine.

At Coors Field, UCHealth nurse Karen Nerger said this is a very emotional time for front-line medical workers who have seen the highs and lows of the pandemic.

“It’s really emotional for me,” Nerger said. “Since March, I’ve worked in the ER, I’ve worked at a testing site and now I’m giving the vaccine. I myself want to go through the full gamut and see the people get through this together.”

Jesse Paul of the Colorado Sun contributed as the pool reporter from Commerce City.