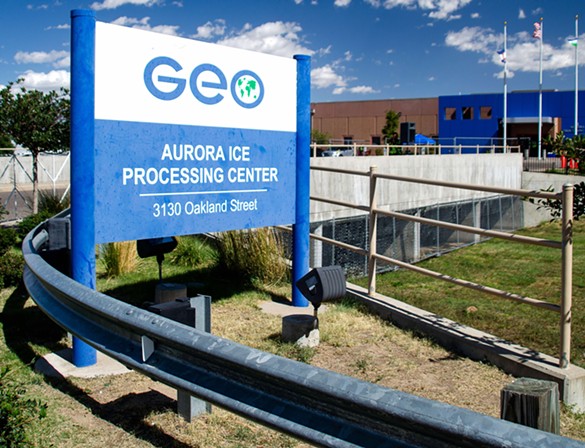 The family of an immigrant who died at an Aurora detention center seeks damages in a wrongful-death lawsuit filed Nov. 12 by the American Civil Liberties Union of Colorado.

Kamyar Samimi died at the Aurora Contract Detention Facility, a for-profit detention center operated by GEO Group Inc., in December 2017. According to the lawsuit, Samimi had been taking methadone — a form of medication-assisted treatment for opioid use disorder — every day for 25 years before being arrested by ICE agents at his home in Thornton.

“Dr. [Jeffrey Elam] Peterson, the only full-time physician at the facility, cut Mr. Samimi off his methadone cold turkey,” the ACLU’s complaint says. “That action was medically unjustifiable. Then, Dr. Peterson failed to treat and respond properly to Mr. Samimi’s severe withdrawal symptoms.”

The family — three children between the ages of 22 and 38 — seeks damages from both Peterson and the GEO Group, alleging “negligence, medical malpractice, wrongful death, and violations of the Rehabilitation Act.”

In a statement provided to the Independent, a GEO spokesperson said the company “strongly rejects” the allegations in the lawsuit.

“The Processing Centers we manage on behalf of ICE are top-rated by independent accreditation entities, including the National Commission on Correctional Health Care, and provide high-quality residential care,” the spokesperson said. “We are committed to providing a safe and secure environment for everyone in our care.”

Samimi’s arrest on Nov. 17, 2017 was based on his conviction “for possession of a small amount of a controlled substance twelve years earlier. The immigration charge asserted
that Mr. Samimi’s twelve-year-old conviction rendered him removeable from the country,” the lawsuit says.

The complaint paints a harrowing picture of Samimi’s final days, in which medical professionals denied Samimi methadone and allegedly ignored his serious withdrawal symptoms and abdominal pain, until paramedics were finally called as Samimi lay on the floor vomiting blood.

“The sudden cessation of methadone violates the applicable professional medical standard of care, and causes excruciating withdrawal symptoms that include severe dysphoria, cravings for opiates, irritability, sweating, nausea, tremors, vomiting, insomnia, and muscle pain,” the complaint notes. “It also leads to seizures in some cases. These symptoms can sometimes lead to life-threatening complications. Psychological symptoms of withdrawal may include decompensation, severe depression, and suicidality.”

The Office of the Coroner for Adams and Broomfield Counties concluded in a January 2018 report, according to the ACLU’s complaint, that Mr. Samimi died “of undetermined causes,” but that emphysema and gastrointestinal bleeding “likely contributed” to his death.

“Methadone withdrawal cannot be ruled out as the cause of death,” the coroner’s office noted.

In a detainee death review obtained by Rocky Mountain PBS in October, ICE’s Office of Professional Responsibility, External Reviews and Analysis Unit found the detention facility “did not fully comply” with ICE standards for medical care, safety and security.

The review lists 12 deficiencies, which it states “should not be construed as contributory to the detainee’s death.”

• The facility’s director of nursing and midlevel provider positions were vacant for longer than six months.

• Nurses administered less than half of the doses prescribed on an as-needed basis for Samimi’s withdrawal symptoms.

• Samimi’s possible withdrawal did not lead staff to conduct an initial provider assessment within two days of intake.

• Despite Samimi’s life-threatening withdrawal symptoms, staff didn’t transfer him to an emergency department in the week following intake.

• Staff did not complete an initial physical assessment during Samimi’s 15 days at the facility.

• Staff did not complete a Medical/Psychiatric alert for Samimi.

• Samimi was not scheduled for a dental exam.

• The day Samimi died, the facility’s physician did not answer or return two phone calls from medical staff.

• Staff did not obtain Samimi’s informed consent before administering the anti-depressant and sedative drug Trazodone.

• During the 14 hours between Samimi’s placement on suicide watch and his psychiatric evaluation, staff did not conduct a welfare check.

Correction: A previous version of this story incorrectly stated in the headline that the ACLU was suing ICE. The ACLU is in fact suing the GEO Group, and ICE was not named in the lawsuit.