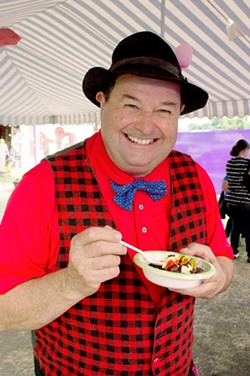 Jim Jackson and Birgitta DePree have been an integral part of the Colorado Springs theater community for decades. This powerhouse couple, co-founders of the Millibo Art Theatre, have made a commitment to provide new, unique and interesting theater experiences to the Pikes Peak region. The majority of the MAT’s programming features world and regional premieres, one-man shows, local performing arts showcases and short play festivals. They run a children’s series simultaneous to their adult series, with special touring shows and summer camps rounding out the calendar.

And, of course, both Jackson and DePree are quality performers themselves. DePree, who occasionally acts with the Colorado Springs Fine Arts Center as well, has created a veritable sitcom cast of recurring characters that emcee and perform in the MAT’s cabarets. Jackson, under his pseudonym Mr. Guffaw, creates and performs clown shows throughout the region, and brings big bubble magic to almost every local kids’ and art festival you can think of. Both of them have created their own solo shows from the ground up, and proved their mettle as writers, actors, directors and supporters of the arts.

On Feb. 19, they’ll be sitting down with us at SCP Hotel to discuss creativity in all its forms in the very first installment of our new event series, COS Creatives. In advance of this discussion, we caught up with Jackson and DePree to give the public a preview of the insight they’ll be sharing. (Disclosure: This writer worked for the MAT between 2013 and ’15).

Why is that?
Jackson: Well, because this was the early ’90s and I just could not identify myself with Colorado Springs, so Manitou Springs gave me an out. It was like, ‘No, Manitou — It’s like artists and hippies. It’s great.’ So that identity remained in place for many, many years. But really, coming down to do shows at Smokebrush, and then meeting a lot of people through that — that’s really what attracted me to the area.

And what kind of performance were you doing at the time?
Jackson: I was touring mostly, with a clown show, and it was all touring to theaters and festivals. I was on the road — even though I lived in Manitou and had an apartment there — I was on the road most of the time. Nine, 10 months out of the year, I’d be gone. That was really up until 2000. And then I stopped touring as much, so I was in town more. Then I met Birgitta. And then we got married in 2001 and we started the theater all at the same time.

How about you, Birgitta?
Birgitta DePree: For me, ever since I was a little kid, I would love to put together plays that I’d put my cousins in, and build things. And in my family there was a real appreciation of art. And, you know, I grew up in Africa, and my parents always wanted to be engaged with the arts. Wherever they traveled, they would always get a piece of art to take home with them. They valued that. So I grew up always loving — I always made plays and told stories. I was quite shy in high school and then had a great teacher in college, and I found theater.

I lived a couple different places and explored improv theater. But I knew for me, I needed to go to school. I think I needed that kind of intensive training to push me, so I went to grad school up in Denver. When I left, I didn’t want to go to New York. I didn’t know where I wanted to go, but I knew I wanted to make theater and I thought if I go to New York I’ll probably just be a waiter [laughs].
I created some shows up in Denver that I toured to schools, I started working with an organization where I taught teachers how to integrate the arts into education. Alongside that, I was making shows, and this whole other life evolved about making art. And then I met Jim, and we fell in love.

DePree: Jim loved making plays and had a different skill set. And then he came back from a show, he was so excited about the show he had done in North Carolina. After the show, the theater had set up a place where the subscribers and their kids could come together and meet the artists. And there was this whole kind of community. And we had this conversation. We just talked about, like, oh, if we had our own theater.

Literally that next week, we had a conversation with Deborah Thornton [executive director of Imagination Celebration]. That was when the BAC [The Business of Art Center, now the Manitou Art Center] had just bought that building. And she was like ‘Oh really, you want to do this? How about putting together a proposal and you can do it at the center?’

Jackson: It was fairies. No, no, it was serendipity. ‘Cause it’s timing, you know?

DePree: It is, and it’s articulating very clearly a vision. And then sometimes when you do that, the path sort of reveals itself. Once you’re clear about what you’re looking for, you kind of find it.

Jackson: Yeah. And the more you voice it, then that creates connections. If you just keep it internal, then nobody has the idea that ‘Oh, that’s what you want to do!’ So by voicing it, that sort of puts things into motion and also holds you accountable. Like, ‘You said you wanted to do this. Now, how are you going to follow through with that?’ I think that initial experience in Manitou, though, it sort of taught us the importance of place to make art.

How so?
Jackson: You’ve got to have a space dedicated to what you do. Otherwise you’re wasting all sorts of time and energy just trying to find a place where you can realize it. And in theater it’s so critical, because if you don’t have access to a space that you have control over — so that you can really make your whole piece within that space, and control the sound and the lighting and how the audience comes in and the seating and all of those things — then it’s an uphill battle. You’re just always falling short of what you want.

DePree: I feel it is place, but not just physically. There’s a sort of a metaphorical space as well. And I think we make space for, like, in terms of every season, we commit to making some shows; we’ve made space in time. But also the community has accepted that. They’re making space for it [the theater].

Do you find that that happens when you’re an individual performer in a larger show as well? Like, you have to commit the time, the space, you have to have that kind of control?
Jackson: I think everybody who seriously commits to performing a piece… that it does require a lot. Theater is an ensemble experience. There’s always different levels of commitment. And so as a director, as a producer, you’ve got to make sure everybody’s committed equally, and hopefully at a really high level, because otherwise it just gets real shaky. … And it’s weird because in our history, we usually avoided all of that by just making our own shows. It’s a total cop-out because we would just do solo shows [laughs].

DePree: There’s sort of this leap of faith that happens. You can come forward and go, ‘I’m gonna make this,’ but it also comes and meets you. I think that there’s this idea that ‘I’m making this.’ And I feel — even with this commitment to this theater company — it’s not just us. There’s these other forces that come in. Like, if they hadn’t been there, it wouldn’t work.

So there’s really only so much control you can have over anything. Whether you’re putting together a show or directing a theater company.

DePree: I think if you think you have full control, you don’t make very interesting work.

Editor’s note: This interview has been edited for clarity and length.