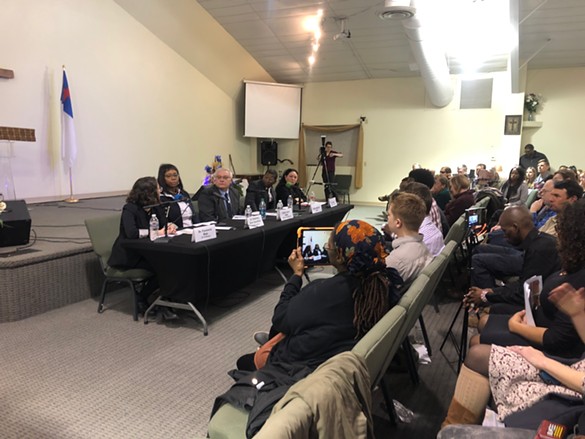 A panel on law enforcement accountability, organized by community members pressing for change after the police shooting of 19-year-old black man De’Von Bailey, included plenty of tense moments. But panelists hoped that it also represented an important step toward healing.

NAACP Colorado Springs posted a video of the event online.

This was the first event of the Law Enforcement Accountability Project, an offshoot of the Justice for De’Von Editorial Board. That group formed after Bailey’s death Aug. 3 to advocate against police violence.

Bailey was shot near Adams Park in Southeast Colorado Springs while running from police who responded to a report of an armed robbery. A gun was later recovered from Bailey’s shorts.

A grand jury ultimately ruled that the officers’ actions were justified, but many in the community feel differently and disagreed with actions by law enforcement and city officials after the incident occurred.

“We’re not depending or relying on government officials or the police chief to solve this community problem,” Lee said to introduce the Feb. 6 event. “This is going to be a dialogue and conversation with some thoughts and ideas, and the impetus is on us, the community. I believe that the answer lies within us and we have to be the ones to do this.”

Gia Irlando, outgoing community relations ombudsman for Denver’s Office of the Independent Monitor, spoke about crucial elements of civilian oversight of policing, such as independence and adequate funding.

“There’s no two oversight agencies in the entire country that have all of the same authority, all of the same independence, all of the same tenets of independent oversight,” said Irlando, member of the National Association for Civilian Oversight of Law Enforcement (NACOLE) Board of Directors. “And it’s because you have to mold it to your community.”

Law officers have shot and killed dozens of people since 2001 — nearly all deemed justified by the District Attorney’s Office: Shoot, Don’t Shoot

Police Chief Vince Niski was on the defensive for most of the night, first saying that much of the data the students were looking for should have been available already, and that the department did seek out regular feedback from the community.

But Stephany Rose Spaulding, chair of women’s and ethnic studies at the University of Colorado at Colorado Springs, pushed back.

“The reality is, this room is standing-room-only, and there are people watching online, because what we have in place in this city is ineffective,” she said. “As City Council, as police officers, receive that it is ineffective, because we would not have a room like this if it were effective.”

Lee, who moderated the conversation, sought to keep the dialogue respectful.

“Let me just remind us that where you all currently sit is the last place that De’Von Bailey’s family and loved ones saw his face,” Lee said. “…We want to move towards solutions. We’re not going to get there tonight.”

Niski drew disapproval when he argued that the department was not a racist organization.

When racist officers are identified among the police force, he said, “we identify the bad apple — we deal with it very quickly.”

Rojo argued that response was dismissive of the community’s concerns.

“If the Colorado Springs Police Department isn’t even going to acknowledge that the community is hurting and that there is a real problem, it’s going to be very, very difficult to come together to find a solution to a problem that you’re saying doesn’t even exist,” Rojo said.

A rare moment of audience approval for Niski’s words came after Spaulding asked Niski, “The community is crying for accountability, and they want to be involved in what that accountability looks like. Is that something that you are receiving as valid?”

“This is the first time I’m seen you or any officer at any dialogue,” said Kevin Mitchell, co-chair of the Colorado Springs NAACP’s Criminal Justice Committee. “…This is the first step right there, is to actually get involved in the community…Come see [Bailey’s] memorial, Chief, I’ll hang out with you.”

Niski also said he’d be willing to talk with researchers who wanted more data on police interactions with the community, including but not limited to use-of-force incidents.

The Law Enforcement Accountability Project plans to send a delegation to NACOLE’s symposium on independent oversight of law enforcement March 6 in Austin, and hopes city leaders and local police representatives will join.

Editor’s Note: The Colorado Springs Indy was the media sponsor of the panel event Feb. 6.