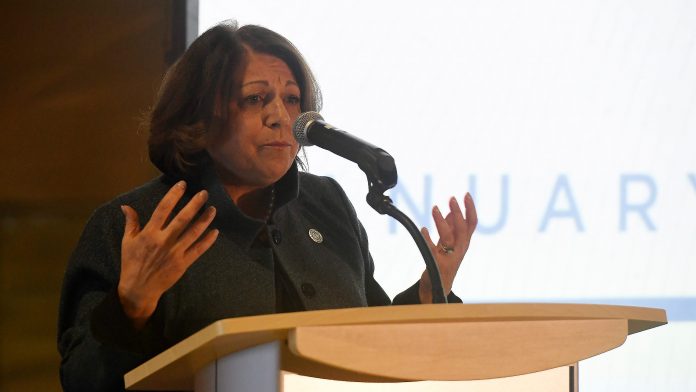 A week after the CSU Faculty Council grilled the administration on its handling of sexual misconduct and other issues, another university organization came forward to condemn what it called the school’s and Board of Governors’ “repeated and unnecessary efforts to minimize and discredit students who are sharing their experiences.”

In recent weeks, a growing number of student-athletes, faculty and university offices have expressed their concerns publicly about the way sexual misconduct, COVID-19 and racial insensitivity issues have been handled by President Joyce McConnell; Diana Prieto, vice president for equity, equal opportunity and Title IX; athletic director Joe Parker and other athletic administrators.

On Tuesday, the university’s Women and Gender Advocacy Center sent a letter to the campus community stating it unequivocally supports survivors and the unprecedented number of people speaking out on the issues, even at the risk of retaliation to the center that serves CSU students.

Center director Monica Rivera said in an email response to the Coloradoan that the fear of retaliation for anyone who speaks out about interpersonal violence is significant and real.

“Most survivors and their supporters have almost nothing to gain by going public,” Rivera said. “We felt compelled to write a letter because we were hearing from students that they felt abandoned by our silence. Our role is to make sure survivors, many of whom are too scared to come forward, know that we are here to support them.”

The Women and Gender Advocacy Center’s letter was in response to the BOG statement supporting administration, CSU administration’s responses to issues during last week’s faculty council virtual meeting and an opinion piece by McConnell and Prieto that appeared in the Coloradoan.

The letter said its response was not based on opinion but “our truth about things that have been well documented.”

Confidentiality often prevents the center from sharing specific incidents and concerns, the center wrote, but it was prompted to respond broadly now that the issues have been made public.

“Some of (the university’s and Board of Governors’ statements) have come from folks who have never had a single conversation with students who are speaking out,” the letter reads. “As an institution, we cannot ask survivors of violence to come forward with their experiences and then turn around and publicly discredit them or frame their experiences as anomalies.’ ”

The Coloradoan in a Wednesday email requested an interview with Board of Governors members. The email was acknowledged, but a response had not been received by the Coloradoan as of late Thursday afternoon.

The center’s letter acknowledged McConnell’s elevation of the office that oversees Title IX to cabinet level and expanded budgets for such resources as a “good thing.” McConnell also has recently created an action plan to address recommendations, prompted by an external investigation of the university’s athletic department regarding allegations of a COVID-19 cover-up, racial insensitivity and verbal abuse.

The letter also stated that CSU, like other universities, is not immune to issues involving sexual misconduct and racial insensitivity.

“We have witnessed the university conduct investigations which indicate no existence of ‘systemic abnormalities’ while also losing survivors who transfer, drop out and/or die by homicide or suicide every year,” the letter says. “To suggest that CSU is somehow exempt from dynamics which are present on every single college campus in the country would be naive at best and dangerous at worst.”

The letter pointed out a Board of Governors statement that said CSU had no history of major NCAA infractions but did not mention the 62 Title IX cases involving student- athletes over the past four years at CSU.

Rivera said reaction to the letter has been mixed, with some believing it is disloyal to CSU. However, she said mostly the responses from students, alumni, former and current staff and faculty have been “overwhelmingly validating” and some have called the center “brave.”

“I don’t believe that supporting students should ever be considered disloyal or brave,” Rivera said.

Barry Braun, professor and head of CSU’s Department of Health and Exercise Science, said he wants to believe McConnelI and the administration are sincere in fixing the problems, some of which he said predate McConnell, who was selected as the university’s first female president in July 2019.

However, he said the Board of Governor’s statement last week in support of the administration’s handling of the issues and discounting concerns repeatedly raised by student-athletes and staff was counterproductive.

“The letter the Board of Governors sent didn’t make me feel like the issues were being taken seriously, and that has been a source of frustration for those who have come forward and put themselves on the line,” Braun said. “I see this as an opportunity to right historical wrongs and for the university to commit to being accountable for that which we all aspire.”

Emma Corwin is a CSU tennis player and leadership member of Rambition, a group that supports leadership development of female student-athletes. She said university and Board of Governors statements indicating they have a better grasp of the facts experienced by student-athletes and students is essentially calling them liars.

“Their statements are attempts to discredit and silence us,” Corwin said. “But WGAC, faculty and many others within CSU recognizing the current culture and voicing support for change should let them know that we will not be pushed aside.”