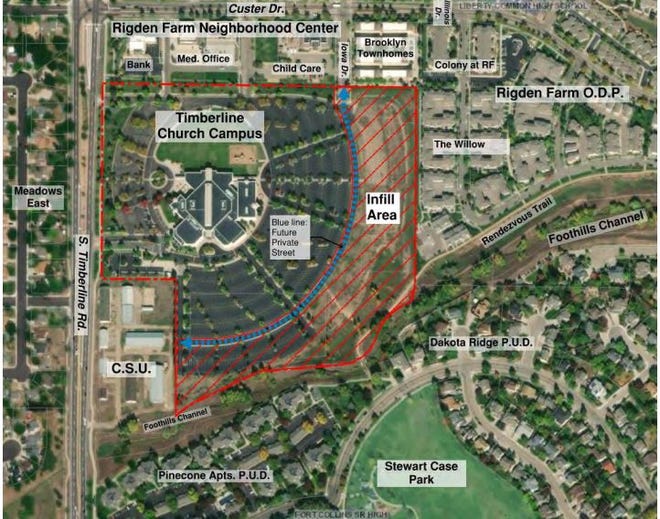 Neighbors of Timberline Church, 2908 S. Timberline Road, can weigh in May 3 on plans for a proposed land swap that could eventually lead to 180 “affordable and attainable” apartments on what’s currently church property.

The church and Colorado State University have been working on a deal that would trade roughly 10 acres on the southeast edge of Timberline’s property for 5 acres of CSU’s former agronomy farm south of the church.

Once the land swap is finalized, CSU will donate the land to Tetrad Property Group to build and operate 180 below-market rate apartments. Sixty units will be reserved for university employees who make less than 80% of the Area Median Income, said Brett Anderson, special assistant to CSU Chancellor Tony Frank.

Donating the land to Tetrad helps reduce the cost of units, Anderson said. Tetrad will  eventually “own the property with a legally binding contract to ensure affordability of units for a minimum of 20 years,” he said.

The units would create a new supply of workforce housing that CSU employees have long said is needed in Fort Collins.

The other 120 units would be open to the public but would rent for less than market rate, creating a new supply of attainable and workforce housing for CSU employees, Anderson said. Although Tetrad has not finalized details, Anderson said they were likely to be for those making about 90% of AMI.

Someone making 80% of that would earn $53,700, or $76,700 for a family of four. An apartment is considered affordable to rent if a household earning 80% or less of AMI pays no more than 30% of their gross monthly income toward rent, including utilities.

The average rent for an apartment in Fort Collins is nearly $1,600, according to RentCafe.com, although some new apartments coming online are charging close to $2,000 a month for two bedroom units.

According to current plans, the units would be spread out among seven three-story buildings.

CSU has rehired Debbie Mayer, who helped employees navigate a difficult housing market in 2018, to survey the demand for affordable and attainable housing among its staff. That could dictate not only the Timberline project but former Hughes Stadium land as well, if that project goes forward.

“We’re hoping over the summer and fall to do a full data analysis and get a good sense of the sizes and houses that would be needed,” Anderson said.

He anticipates construction could start late this year or early 2022 with the apartments ready for occupancy in spring 2023.

In the land swap, CSU gets nearly 10 acres and Timberline gets about 5, Anderson said. “They’ve both been appraised at the same value,” he said. “The 5 acres (of CSU land) on Timberline Road is more valuable” because it has frontage on Timberline.

Once the land swap is finalized, Timberline Church will have more than 30 acres for future use. The church will also present an overall development plan for the site as it grows over the next couple decades.

Related:City of Fort Collins to sell land bank property for a song to ensure affordable housing

A virtual neighborhood meeting will be held from 6-7:30 p.m. May 3. Information on how to participate will be posted at fcgov.com/developmentreview/proposals 48 hours prior to the meeting.