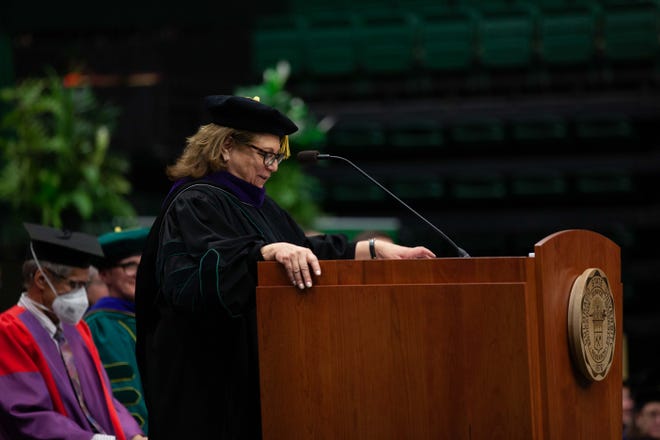 Joyce McConnell is stepping down as Colorado State University’s president. Her last day will be June 30, per terms of a more than $1.5 million separation agreement with the Fort Collins university.

In a joint message sent to campus faculty, staff and students, McConnell and CSU System Chancellor Tony Frank said the CSU Board of Governors and McConnell “have decided to part ways.”

In a separate statement to the university, McConnell said serving as the president of CSU was the highest accomplishment of her career.

“This community is truly extraordinary — capable of transformative action of a scope and speed not often seen in higher education,” she wrote. “Together, we have successfully faced challenges of a global pandemic and accomplished what many thought impossible: emerging from the pandemic in a strong position for the future with remarkable consensus reflected in Courageous Strategic Transformation.”

McConnell’s annual salary was $550,000 per year. In the separation agreement between the board and McConnell, the board agreed to pay her $1,572,725, subject to any necessary withholdings, as a result of ending her contract early. When McConnell arrived in 2019, she signed a five-year agreement which would keep her employed as president through 2024.

The separation agreement also includes a “mutual non-disparagement” section that prohibits Frank or McConnell from saying negative things about each other, the governing board, individual board members or university staff and employees.

Through a spokesperson, Frank and board president Kim Jordan declined to answer more questions about the decision, saying it’s against their policy to discuss personnel issues.

You can read the separation agreement at the end of this story.

During a brief statement at the start of Thursday’s Board of Governors meeting in Denver, Frank said the board would move in the next couple of days to name an interim president before initiating a broader search for McConnell’s replacement.

Sue Doe, chair of CSU’s Faculty Council, said in a statement that the council “appreciated President’s McConnell’s willingness to engage with faculty at Faculty Council meetings, at Executive Committee meetings, and in less formal settings.”

“We especially appreciate that she was highly visible during the pandemic … While change is never easy, it is a constant. The faculty will be central to helping the university through this transition, and we are prepared to do so.”

Rob Long, student body president of CSU, said he was “a little shocked” by the decision and “never saw this coming.” Long was sworn in as a member of the Board of Governors Thursday after being elected to his position in April.

“I was looking forward to working with her, but I’m equally as enthusiastic to work with the next president,” he said.

Watch:CSU Board of Governors meets after President Joyce McConnell’s resignation

McConnell was not present at the Board of Governors meeting on Thursday, though she is still scheduled to speak at the multiday meeting on Friday to give a campus update to the board, per a draft of the meeting agenda.

McConnell arrived at CSU in 2019 after Frank moved to the position of chancellor. She is the university’s first female president. She came from West Virginia University where she served as provost and vice president for academic affairs.

Much of her time at CSU was spent navigating the COVID-19 pandemic and forming her “Courageous Strategic Plan,” which she hoped would guide the university to new heights.

She oversaw a transitional period at CSU, as numerous high-level administrators left the university or took different positions. Rick Miranda, former provost of the university, left that position late in 2019 and McConnell replaced him with Mary Pedersen. In addition to Pedersen, six other people have been brought into vice presidential or dean roles under McConnell. Four people in executive positions have announced their resignations or retirements during McConnell’s tenure.

In August 2020, McConnell launched an $107,000, two-month investigation into the CSU athletic department following allegations of emotional abuse and racist behavior.