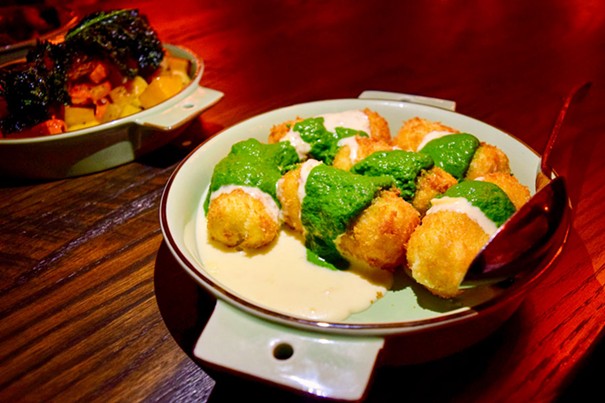 For the last two years, my food-and-drink colleague Matthew Schniper and I have written these year-in-review pieces to reflect on the best plates and biggest trends from our work over the prior 12 months. Schniper recently did his best imitation of a 19th century poet (in my estimation) by lamenting the potential state of our food scene with regards to the replacement of stunner Smørbrød with the underwhelming Roswell, so I’m wrapping up 2019 solo here — though, for the record, I, too, dearly miss Smørbrød and their seafood soup and house-infused akvavit.

But on to what worked in Springs eats this year: The new openings that have stood out most to us are all places that serve food from the heart. These spots didn’t just serve up sustenance — they told small stories about the people who made these dishes, where they came from, and what they care about.

Starting in Pueblo, we found excellent drinks and a great deal on shareable plates at Twenty One Steak. The bar squad made good use of Colorado spirits in their $9 cocktails, a good bang for my buck, and American-sized shareable plates featured some local flavors like the green chile Pepper Jack inside — and green chile coulis atop — potato croquettes. There’s love for local products and flavors here, and we dig that big-time. Speaking of green, when my New Mexican college buddies found out that Doug’s was started by Doug Weckerly of now-defunct Albuquerque brand Weck’s Restaurant, they were happily surprised. I’m sentimental about New Mexican food, but Doug’s blew my memories of the Frontier Restaurant in Albuquerque out of the water with flavorful green chile that doesn’t miss on the spice, great meats and the best damn diner coffee I can remember drinking.

Schniper has preached the gospel of the Khao Soi at Mangosteen Thai Street Food ever since his first bite, and while I’ve yet to visit, coconut-curry noodle soup sounds like a surefire win. Owner Jasmine Andrew’s push for counter-service Thai street food also included a red curry with Japanese kabocha squash that sounds like autumn in a bowl. He also recommends Don Guillo on the city’s Southeast side, which is owned and cheffed by Francisco “Guillo” Beauchamp, who first earned our fealty at Chinchorreo Fuera de la Isla. His churrasco (skirt steak) was excellent at Chinchorreo and remains excellent here, certifying him as a skilled hand behind the grill. That Tripleta Don Guillo also sounds amazing, a mountain of ham, bacon, chicken thigh and skirt steak with mayo-ketchup and shoestring fries on spongy pan criollo, a gut bomb worthy of Dionysus.

I could go on, eatery by eatery, but in the interest of brevity, I’ll say you should make time for these spots and dishes, too: prolific taphouse Beasts and Brews and especially their knuckle sandwich, loaded with whiskey- and chocolate-braised meat, bleu cheese, pickled peppers and onions, and blueberry horseradish cream; Steven Chi’s Wednesday night noodle and dumpling pop-up at Bar-K with its stunner Taiwanese flavors; Lucky Dumpling for the bao bun chicken and dumplings, which combines chef Brother Luck’s Southern-fried culinary heritage with his love of hip-hop and kung fu flicks; Kushland Kabab and every single item owner Mohammad Azami serves; buttery crust, gorgeously spiced chicken pot pie at Taste of Brasil; K2 Cuisine Indian food truck for delightful sandwiches on awesome house-made doughs; and Fala-Filo and its mansaf, a lamb dish cooked fall-off-the-bone tender and served with flavorful seasoned rice.

Again, these are just some of our highlights from the year, built around the theme of authenticity and sincerity, food from the heart. Cheers to 2019’s fine additions to the scene, and high hopes for a bright 2020 ahead.