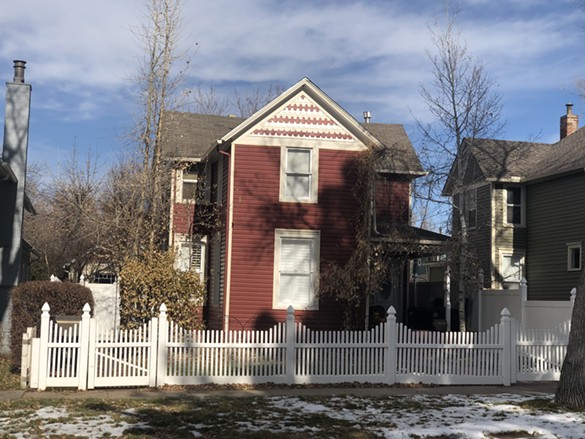 The charges stemmed from a Nov. 13 welfare check at Play Mountain Place, one of Faith’s daycare properties. The state Department of Human Services had asked the Colorado Springs Police Department to assist in responding to complaints that the facility was housing more children than its license allowed.

When a police officer arrived at Play Mountain Place (838 1/2 Willamette Ave.), she spent about 20 minutes attempting to contact Faith at the front door, back door and by phone, according to the police report.

Then, the officer was notified that a parent had been able to reach Faith by phone to say she “wanted to pick up her son immediately.” Christina Marie Swauger, another suspect who was arrested on the same charges as Faith, met with the parent after carrying the parent’s son out the back gate.

The officer then asked Swauger to meet with Faith, and Swauger escorted the officer into the cottage daycare — where no children were present.

So, the officer asked to check the main house at 838 E. Willamette Ave., which was on the same property as the daycare.

The officer noticed “a large stack of children’s backpacks in a closet,” but Faith “explained that she was volunteering to clean the backpacks for a soccer team” and denied that any children were in her residence.

The officer heard children’s music coming from the basement, but Faith denied the house had a basement at all.

A second officer arrived on the scene and discovered a false wall and stairwell leading to the basement.

Downstairs, the officers found two adults and 26 children younger than 3 years old. They noticed “many of the children had soiled or wet diapers, were sweating, and were very thirsty upon contact.”

Police found that Faith’s 2019 license renewal form required that she care for no more than six children at Play Mountain Place, and no more than two children younger than 2 years old.

The arrest affidavit notes that the fire department also conducted an inspection on Dec. 5 and found multiple violations, including “issues with carbon monoxide detectors not being installed” and “emergency escape and rescue openings not being adequate” given that the basement exit was blocked by a false wall.

A third suspect in the case, Katelynne Dianna Leigh Nelson, was arrested on one charge of class 2 misdemeanor child abuse and one class 4 felony charge of unlawful possession of methamphetamine, KOAA News 5 first reported.

According to the arrest affidavit posted online by News 5, officers found a backpack in the basement daycare with payslips for Nelson as well as two baggies that tested positive for meth — which led to the possession charge.

In Colorado, a class 4 felony comes with a minimum sentence of two years in prison and/or $2,000 fine. A class 2 misdemeanor charge entails a minimum three-month jail sentence, a minimum fine of $250 or both.

On Dec. 5, 29 parents and guardians of children under Faith’s care filed a civil lawsuit against her and her companies, alleging negligence that led to behavioral problems, developmental delays, eating problems, infections and physical illnesses, phobias, injuries, and sleep problems.

Children suffered from “severe separation anxiety, fear of the dark, fear of sleeping alone, fear of authority, fear of strangers, fear of bugs, fear of bathing and/or bathtubs, fear of the word ‘movie,’ fear of conflict and fear of other daycares,” according to the parents, who are represented by attorneys Jeffrey Weeks and Daniel Kay.

One of those parents, Amanda Miller Luciano, wrote a Nov. 25 analysis of the police raid on Faith’s property for the Indy.

“All of us parents have been pretty anxious to see something happen, and it’s nice to see that there have been arrests made,” Luciano says in response to the news of Faith’s arrest.

Luciano points out that Faith was also allegedly caught hiding kids from authorities in California in the late ’90s.

“Hopefully, these charges will be strong enough that they can convict her, and this conviction will prevent her from ever being able to do it again somewhere else,” Luciano says.