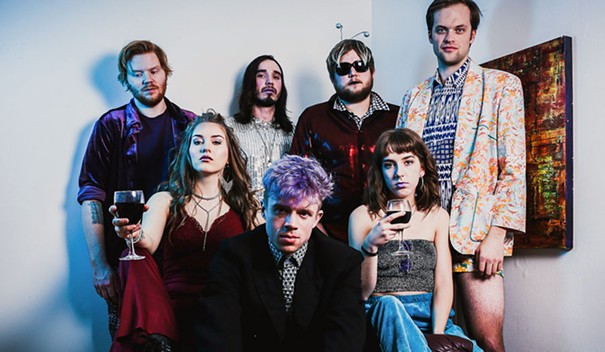 It’s always a welcome sight when Dear Rabbit comes back from the endless road and makes time for a local show, and this week offers a chance to catch Rence Liam and company, joined by an intriguing set of international talent.

Dear Rabbit, who released the excellent LP Shy in late 2018, take the stage at Brewer’s Republic/110 Below (or, as it will forever be thought of by goth kids of all ages, The old Underground) on Saturday, Dec. 14, joined by Canadian art pop ensemble 36?, singer-songwriter Laura Hickli, and locals Convert.

Laura Hickli and 36? both hail from Calgary and have a steady collaborative hand in each other’s music, with Hickli and her sister Kerry both contributing to 36? and 36? frontman Taylor Cochrane playing in the band for Hickli’s solo work. That said, listeners are in for a whirlwind of sonic variety over the course of the evening — Hickli’s solo material is meditative and austere (see her gorgeous debut LP Flowstate, for example), while 36?’s eclectic output is a kaleidoscopic, genre-shattering affair. Their most recent effort, the 2019 LP Milk Mountain, deliriously jumps from eminently danceable neosoul to glitchy electronics to anthemic power pop to harrowing noise and distortion, often in the same song. All this activity and stylistic whimsy belies Cochrane’s often raw lyrical fixations, making for an endlessly contradictory — and utterly fascinating — listen.

Speaking of welcome reappearances, an ongoing musical fixture of the holiday season is the BKG annual Toy and Jacket Drive, helmed by emcee Black Pegasus’ label Brass Knuckle Gang. This year’s show, on Dec. 14, marks the 10th installment of BKG’s hip-hop Christmas toy drive show at the Black Sheep. Proceeds will support Toys for Tots, making it both a night of quality hip-hop and a good way for the local musical community to give back to those in need. Entertainment duties will be handled by DOSE, Chainstore Collective and, of course, Black Pegasus himself.

On Tuesday, Dec. 17, the Black Sheep will also be the site of another decade-long tradition, the 10th annual X-Mas in Necropolis, a rather jam-packed evening of hip-hop. The Necropolis conglomerate will be touring for a series of dates throughout the Southwest and Midwest, and their local stop comes on Tuesday, Dec. 17. The proceedings are headlined by O.E. of local hip-hop outfit ColorBlind and the Missouri-based EmceeSexyHair (aka SeenLoc), along with a veritable smorgasbord of special guests, including: #PressPlayDoe, Mr. Kuss, Namelesz & Sikness, Knuccl, Wicked Pimpz, CX da Grinch, P.O.E. MOB, Troc, Zander X, Bombbadder, As Usual and Misfitikal Rejects. Whew. For an idea of what you’re getting into, check out EmceeSexyHair the Mixtape, which dropped in October 2019.

Finally, Stargazers Theatre plays host to two returning holiday-themed shows that skew more toward the traditional side of things and look to be audience favorites. Country-Western ensemble The Flying W Wranglers — a long-running local favorite, as the group has existed in various forms since 1953, making them one of the oldest Western groups in the world — kick things off with their annual Christmas show on Friday, Dec. 13. I’ve enjoyed the Wranglers’ music for the entirety of my life, and can certainly affirm that their holiday sets are among the group’s most memorable… and if you, like me, hold a fondness for Western swing and traditional cowboy music, it’ll certainly make for a better evening than sitting home alone in a ten-gallon hat with your Sons of the Pioneers 78s and period gramophone.