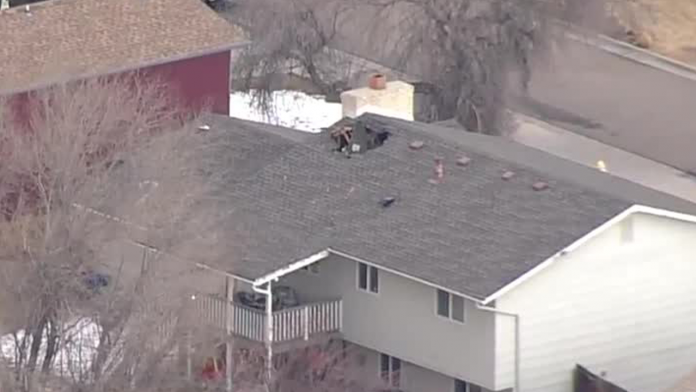 BROOMFIELD, Colo. — Debris from a United Airlines Boeing 777 that made an emergency landing at Denver International Airport fell on several Broomfield neighborhoods Saturday. Authorities said nobody aboard or on the ground was reported hurt.

United Flight 328 was flying from Denver to Honolulu when it experienced a right-engine failure shortly after takeoff, according to the Federal Aviation Administration.

The flight, with 231 passengers and 10 crew members on board, returned to DIA and landed safely. Passengers deplaned on the runway and were bused to the terminal, the FAA said.

Debris from the plane fell onto a wide area of Broomfield, affecting homes and property in the Northmoor and Red Leaf neighborhoods. Parts were seen scattered in parks, lawns and on rooftops. An engine intake cowl fell on a truck, crushing the roof.

There are reports of property damage throughout the area, according to North Metro Fire. But the extent of the damage is unknown.

A family member of a passenger on board shared this video:

Around 1:50 p.m., Broomfield police tweeted images showing what appears to be a part of the outer cover of the plane’s massive jet engine narrowly missing a home near 13th and Elmwood.

Kirby Klements, the homeowner, told Denver7 he at first thought his neighbor’s trampoline had blown over to his yard.

“But as soon as I open the door, I go, ‘that is the front engine of a plane,'” Klements said.

Aerial footage from AirTracker7 shows a hole in the roof of a home in the area of the debris field. The home is located in the 13000 block of Sheridan Blvd. The homeowner told Denver7 he was two feet away from the impact area making a sandwich when debris came crashing into the home. He was not injured.

Additional debris was seen scattered across turf field at Commons Park. Police are asking people in the community if they come across debris to leave it where it is.

Heyden Smith shared a photo of the Boeing 777 showing smoke coming from aircraft’s exposed right engine. Police said witnesses reported hearing a loud explosion and then smoke and debris fall from the sky.

A man feeding ducks in his backyard in Arvada heard the explosion, looked up and saw the right engine on fire.

“I heard this loud rumble, and I thought it was a military aircraft because it was really, really loud. It came right over the house and you could see that the right engine was on fire,” the Arvada man said.

Rachel Welte with the Broomfield Police Department said it was a miracle that no one was seriously injured from the falling debris. Commons Park is typically very busy on the weekends.

“I’m honestly shocked looking at this debris field and how busy Commons Park is. This is a very popular spot in Broomfield. We have the dog park, we have the turf field, there’s playgrounds,” Welte said. “This park on a day like today when it’s not as cold like it was last weekend, we could have hundreds of people here. And the fact that we are still not getting reports of any injuries is absolutely shocking to me at this point.”

United Airlines said they are working to get passengers from Flight 328 on a new flight to Honolulu in the next few hours.

A team from the National Transportation Safety Board is headed to the area to take over the investigation, police said.

Denver7 investigates has learned from a veteran United pilot that passengers likely felt the explosion and vibrations all the way back to DIA. All pilots regularly train for these situations. United pilots train in simulators in Denver every nine months.

Investigators wont know exactly what happened until they tear the engine apart. A person familiar with the situation told ABC News investigators will focus on a possible uncontained engine failure based on the obvious vibration in video evidence and damage to the containment ring.

This is a developing story. More details will be added as more information is released.