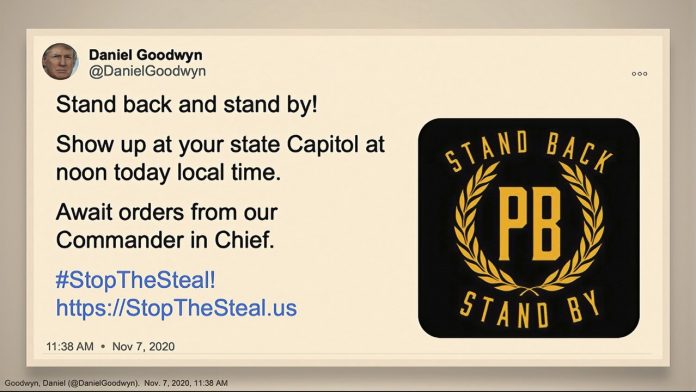 DENVER – Congresswoman Diana DeGette warned senators Thursday that if strong action is not taken to hold former President Donald Trump and his supporters accountable for the Jan. 6 insurrection, similar attacks will happen in the future as far-right groups continue to feel emboldened.

On the third day of Trump’s second Senate impeachment trial, DeGette and other House impeachment managers continued to push their case that the former president had incited his supporters to storm the Capitol on Jan. 6 – and even to be there in the first place.

DeGette, in two floor speeches, walked through videos, media reports, and federal court documents relating to Jan. 6 to argue that many of the people arrested in the wake of the insurrection pointed solely to Trump as their reason for coming to Washington, D.C. and breaching the Capitol.

She showed evidence that some of the right-wing and white supremacist groups, like the Proud Boys, Three Percenters and other anti-government groups, were only feeling emboldened after the events of Jan. 6 and the lack of fallout among Republicans for what occurred.

“They truly believed that the whole intrusion was at the president’s orders, and we know that because they said so. Many of them actually posed for pictures, bragging about it on social media, and they tagged Mr. Trump in tweets,” DeGette said. “Folks, this was not a hidden crime. The president told them to be there and so they actually believed they would face no punishment.”

On the first day of this week’s trial, the impeachment managers made their case as to why a Senate trial for a president who has already left office was constitutional, and the Senate voted 56-44 to agree to proceed, with six Republicans joining Democrats.

On Wednesday’s second day of the trial, the managers, including Colorado Rep. Joe Neguse, laid out three different time periods in their attempt to show that Trump was responsible for his supporters’ actions that day: the provocation, the attack and the harm that followed.

“As you’ll see during the course of this trial, that mob was summoned, assembled and incited by the former president of the United States, Donald Trump. And he did that because he wanted to stop the transfer of power so that he could retain power – even though he had lost the election,” Neguse said on Wednesday.

DeGette, the Democrat who represents Colorado’s 1st Congressional District, picked up with that notion Thursday.

“[Trump] invited them with clear instructions for a specific time and place, and with clear orders: Stop the fight, or to fight to stop the certification in Congress by any means necessary,” DeGette said. “The crowd at Donald Trump’s speech echoed and chanted his words, and when people in the crowd followed his direction and marched to the Capitol, they chanted the same words as they breached this building.”

DeGette played videos of the people who entered the Capitol saying that Trump would be pleased, as well as social media and video comments about “civil war” following Trump’s Jan. 6 speech that preceded the storming of the Capitol.

“Footage from inside the Capitol showed when the insurrectionists first got in the building and confronted police, the mob screamed at the officers that they were listening to President Trump,” DeGette told the Senate. “…When law enforcement interviewed the people who were at the Capitol on Jan. 6, they once again said it was because the president told them to be there.”

The congresswoman walked through multiple instances in which attorneys for people arrested for alleged crimes at the Capitol said outright that their clients were following the president’s orders.

“The confession and the regret simply cascades more and more; insurrectionists are admitting that they came at Trump’s direction.”

DeGette also pointed to the comments made by the former president during last year’s debate in which he told the Proud Boys to “stand back and stand by.”

“They took it as a call to arms,” she said. “And when he called them to arms, they were all ready to act. They were waiting for their orders, which they got on Jan. 6.”

Wrapping up her first presentation early Thursday afternoon, DeGette said all evidence pointed to Trump’s words and actions over many months in 2020 and early 2021 as setting the stage for the insurrection.

“All of these people have been arrested and charged. They are being held accountable for their actions,” she said. “Their leader, the man who incited them, must be held accountable as well. But as I said earlier, you don’t have to take my word for it that the insurrectionists acted at Donald Trump’s direction. They said so. They were invited here. They were invited by the President of the United States.”

In her second presentation later Thursday afternoon, DeGette laid out the short- and long-term impacts of the Capitol siege and warned that inaction from senators to convict Trump would continue to foster even more serious consequences for the nation. The former president was impeached by the U.S. House of Representatives on Jan. 13 on one count of incitement of insurrection.

“Unless we take action, the violence is only just beginning,” she said. “In the aftermath of the attack, we saw a huge rise in threats from domestic violence extremists, including specific threats to the inauguration in D.C. and also to all 50 state capitols. Our intelligence agencies confirm that in addition to these civic threats, President Trump’s conduct emboldened the very same violent groups who initiated the attack and spark new violent coalitions. These groups believe that they’re following his orders. They believe that their acts of insurrection and violence are patriotic. Violence is never patriotic and it’s never American.”

She showed senators intelligence briefing documents and bulletins that discussed those specific threats to state capitols, including the one in Denver, which led the state and city to mobilize forces and security for the few days leading up to and on Inauguration Day.

DeGette discussed the words of Cowboys for Trump leader Couy Griffin, the New Mexico man arrested for his involvement in the Jan. 6 riot, who said that “there’s going to be blood running out of that building,” in reference to the U.S. Capitol.

And she noted the overall cost to deploy National Guard troops to Washington, D.C., had already reached nearly half a billion dollars and were mounting in other states as well.

“Look at the price we pay, the price we are still paying. It’s not just dollars and cents. This Capitol has become a fortress, as state capitols have all across the country. … And it’s not just a loss of access, it’s a dimming of their freedom and it’s a dimming of all of our freedom,” DeGette said. “We must uphold our oath as the tens of thousands of law enforcement officers have done in the wake of Jan. 6. Because if we do not, President Trump’s mob stands ready for more attacks.”

The congresswoman said that Trump had “given life” to violent extremist groups and “has inspired new coalitions of extremist groups who view January as a success.” And she said the FBI has warned that those types of groups engaging together would possible increasing their “willingness, capability and motivation to attack and undermine a government they view as illegitimate.”

“This was not the first time that President Trump inspired violence, but it must be the last time that he’s given a platform to do so. This must be our wake-up call. We must condemn it, because the threat is not over,” DeGette said.

She closed by mentioning the murder of Heather Heyer in Charlottesville, Virginia, in August 2017 after the “Unite the Right” rally and discussed how Heyer’s mother had said in an interview a year later: “If you rush to heal, if you rush to everybody grab each other and sing kumbaya, we’ve accomplished nothing and we’ll be right back here in a few years.”

DeGette said that the nation “did not impose any meaningful accountability” when Trump said there were “very fine people on both sides” of the rally.

“And now, where are we three years later? I would argue we’re not just back where we were. I would argue that things are worse,” DeGette said.