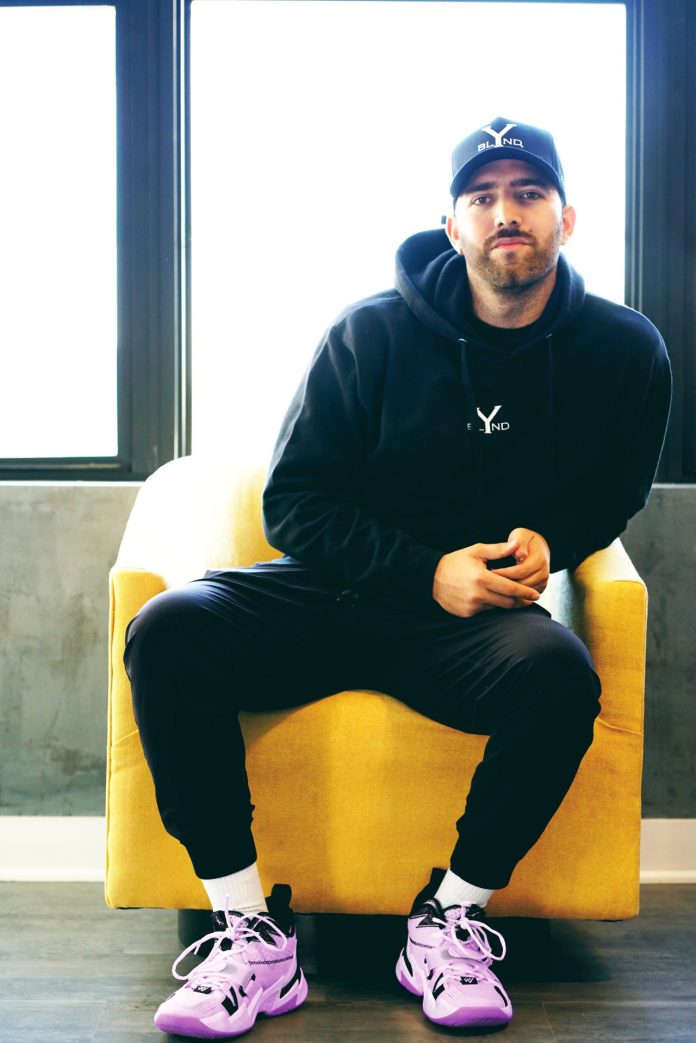 Many popular fashion brands are known for their logos, distinct styles or brand name. Supporting local designers allows individuals to put a face and a story to the brands they learn to love. But even the local brands featured in our closets and on our Instagram feeds may be missing something: a meaningful message.

BLYND, a Denver-based fashion brand founded in 2017 by Adi Apodaca, boasts stylish clothing and accessories; however, the meaning behind the name is its true selling point. Apodaca’s cousin, Milan, lost his vision due to a culmination of an infection called acanthamoeba keratitis and a devastating car accident that led to numerous injuries including a ruptured globe in his eye. Despite the adversity he’s faced, Milan is determined to regain his sight. That is his purpose — his “Y” that shaped the vision for BLYND.

Apodaca’s life drastically changed when Milan lost his sight. Activities that the two used to enjoy, like watching UFC fights, required modifications due to Milan’s loss of vision. Reflecting on the first UFC fight following the diagnosis, Apodaca remembers “ordering the fight and Milan is sitting next to me … I remember just … watching him eat, feeling for his fries and his food, and we have the pay-per-view event on in the background and I just start commentating the whole thing for him,” he said. “I get up and I’m like shadow boxing and fighting and it was this real moment and I got super emotional about it, and I was like ‘oh my God, here I am being the eyes for my cousin who can no longer see’ and I was so sad. But it was also so happy to see him finally start to get a smile on his face.” 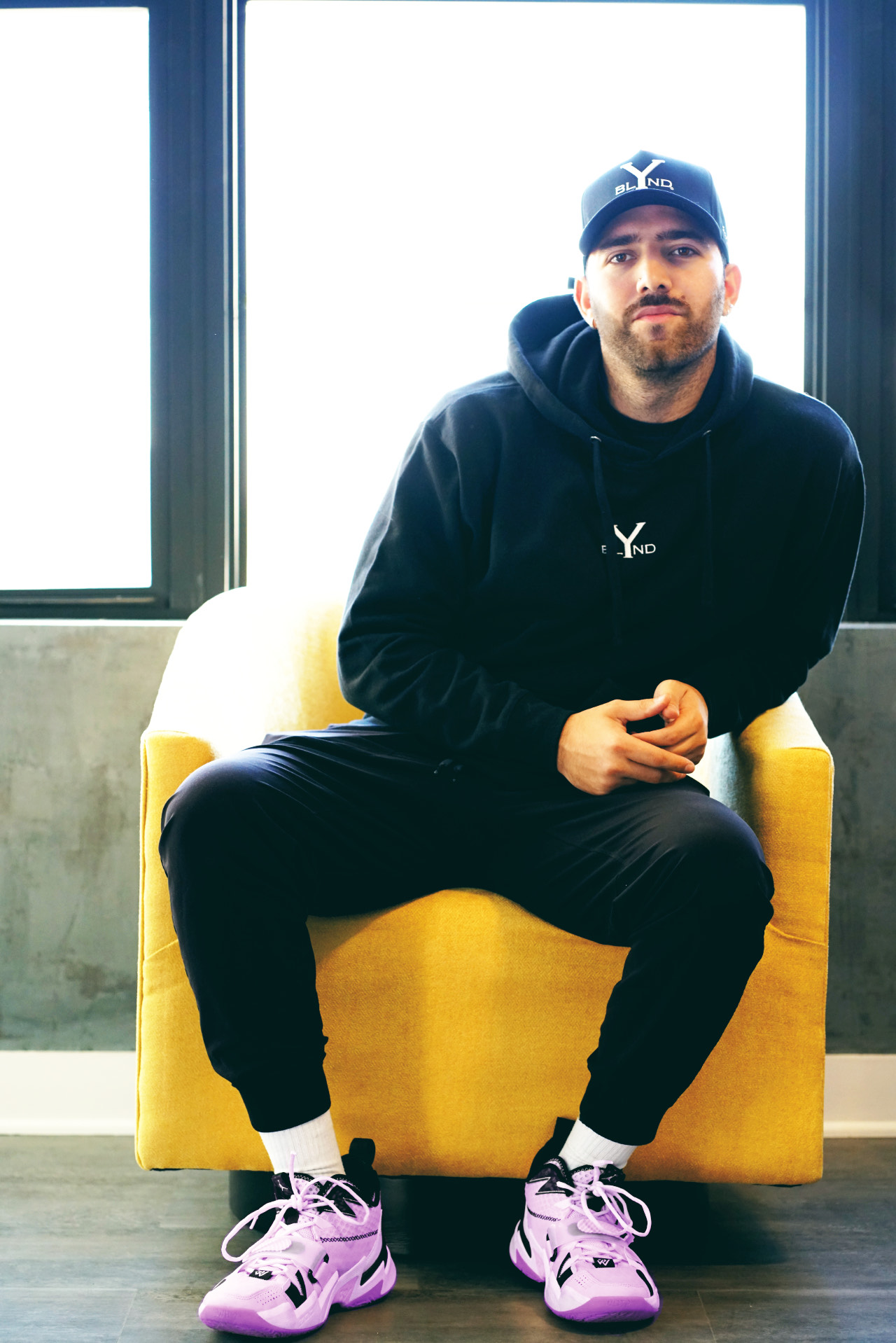 Following this moment, the idea behind BLYND came to Apodaca in his sleep. He realized that everybody has their “Y” and living with that sense of purpose allows individuals to remain “blynd” to any obstacles they may encounter. The brand itself solidified Apodaca’s purpose — to give back to those around him. Through an incredible message defined by perseverance and storytelling, BLYND was formed with the intention to impact people in a positive way.

Fashion has always been a major player in Apodaca’s life. From a young age, he strived to keep up with trends and express himself through style. His first outfit featuring a Nike jumpsuit and Jordans led to sporting overalls and Timberlands as a kid. At age 16, he created his own brand called “ADI” which is his name but also stood for American Dreaming Insomniacs. A black and white shirt displayed a pink flag, symbolizing an ode to the toxic masculinity that Apodaca felt succumbed to in early life. Even at a young age, his clever brand name and message revealed deeper meaning that was much more than just a fashionable garment. ADI helped Apodaca exercise his love for passion which ultimately paved the way for BLYND.

In addition to his full-time job, Apodaca works tirelessly to promote BLYND and spread awareness of Milan’s story and the meaningful message behind the brand. Completely funded and run by Apodaca, he works on BLYND from 5 p.m. to 2 a.m. every day to create content, post on social media and network. As a result, BLYND has surfaced in the Denver community to inspire local creatives. With plans to launch a “Give 50, Give 50” campaign, Apodaca hopes to give back to the community. The idea is to mark BLYND products at 50% off with the expectation that the buyer will donate the remaining 50% to a cause of their choice. As the brand continues to grow, Apodaca hopes to eventually partner with nonprofits to give back to the local community. His efforts are supported by the inspirational message that BLYND offers.

“As someone who’s bootstrapping the whole thing and kind of funding the whole thing, when I can find other artists that are like ‘hey, I’ll model for you’ and I’m like ‘you know what, that’s awesome let’s exchange free clothing for the modeling,’” he said. 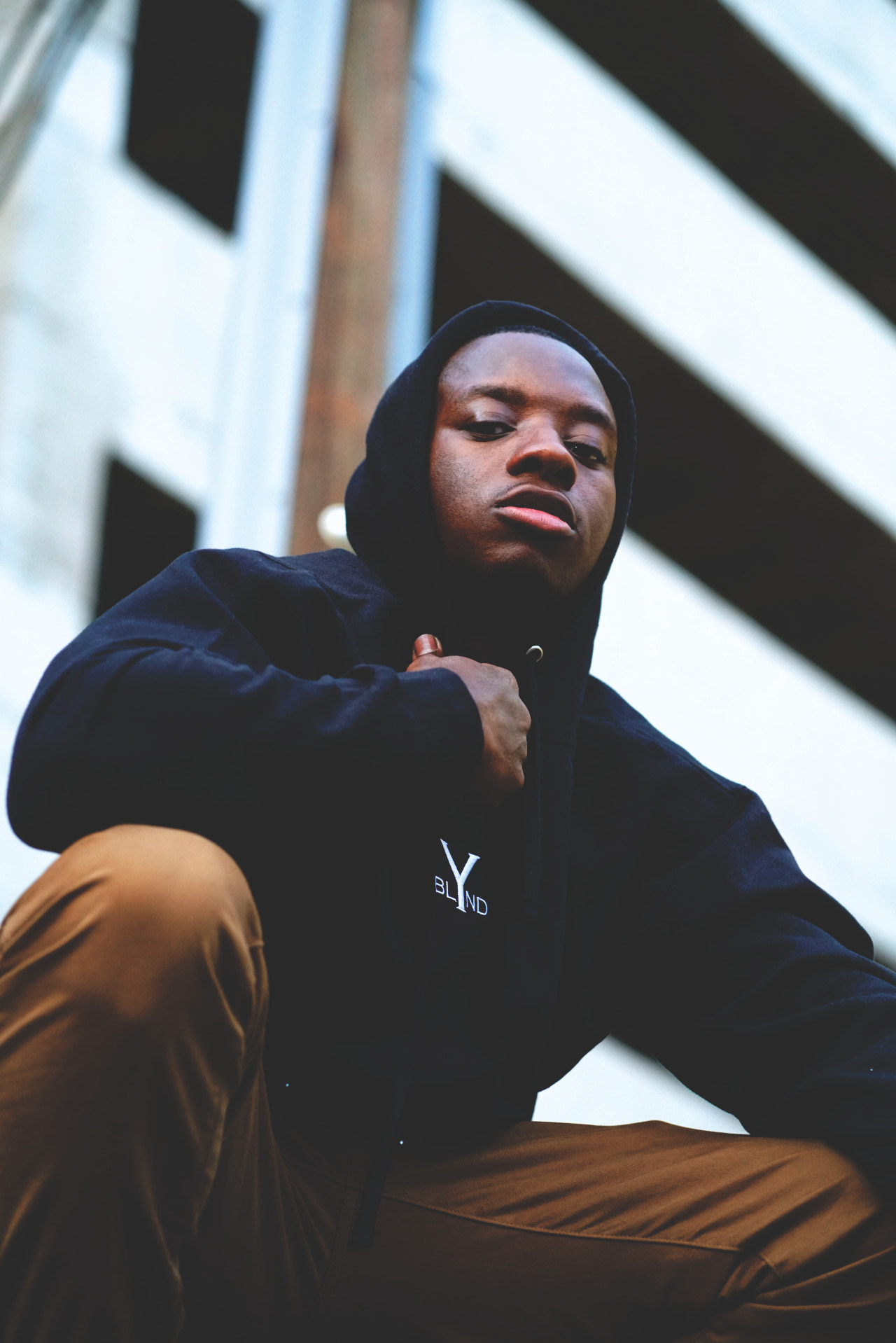 Most recently, a close friend of Apodaca’s and local artist Cat Evans has been integral in supporting the brand’s message. “She has been a huge support,” Apodaca said. “When my hands are full, she is always there to lend hers.” Whether it’s production, marketing, photography, or anything in between Evans is a constant in supporting the brand and its overall mission.

One of the most rewarding aspects of BLYND for Apodaca is hearing people’s Y. Rather than focusing on fitting a certain mold in the fashion industry, he strives to have difficult conversations about life and the challenges individuals face. Apodaca connects with those around him through their Y, which makes all of the hard work behind BLYND worthwhile.

In a recent social media post, Apodaca introduced a series called a “BLYND Date,” where he discussed someone’s story, their Y and how their Y keeps them “blynd.” He hopes this series and the brand will reach those who are managing difficult situations in life. “I want people like that you know?” he said. “Real people that have been through something in their life that have faced adversity and have overcome it.”

BLYND is growing by the minute as Apodaca now offers hoodies in a variety of colors, bomber jackets, beanies, dad hats, windbreakers made out of recycled polyester and sunglasses that are not only handmade but are polarized and biodegradable as well.

“Now we have different colors and varieties and all these different things right, and I think a lot of that goes back to I have more capital now, and I know what my vision is, and I know kind of where the path [that] I’m leading this on to grow it [is going],” he said. “The evolution started with me finding my Y and my Y just kick-started this whole damn thing.”

Apodaca’s family is a significant part of his Y. His grandfather and sister both live with epilepsy, a disorder in the brain that causes seizures. As a tribute to them, the color purple is incorporated into BLYND. 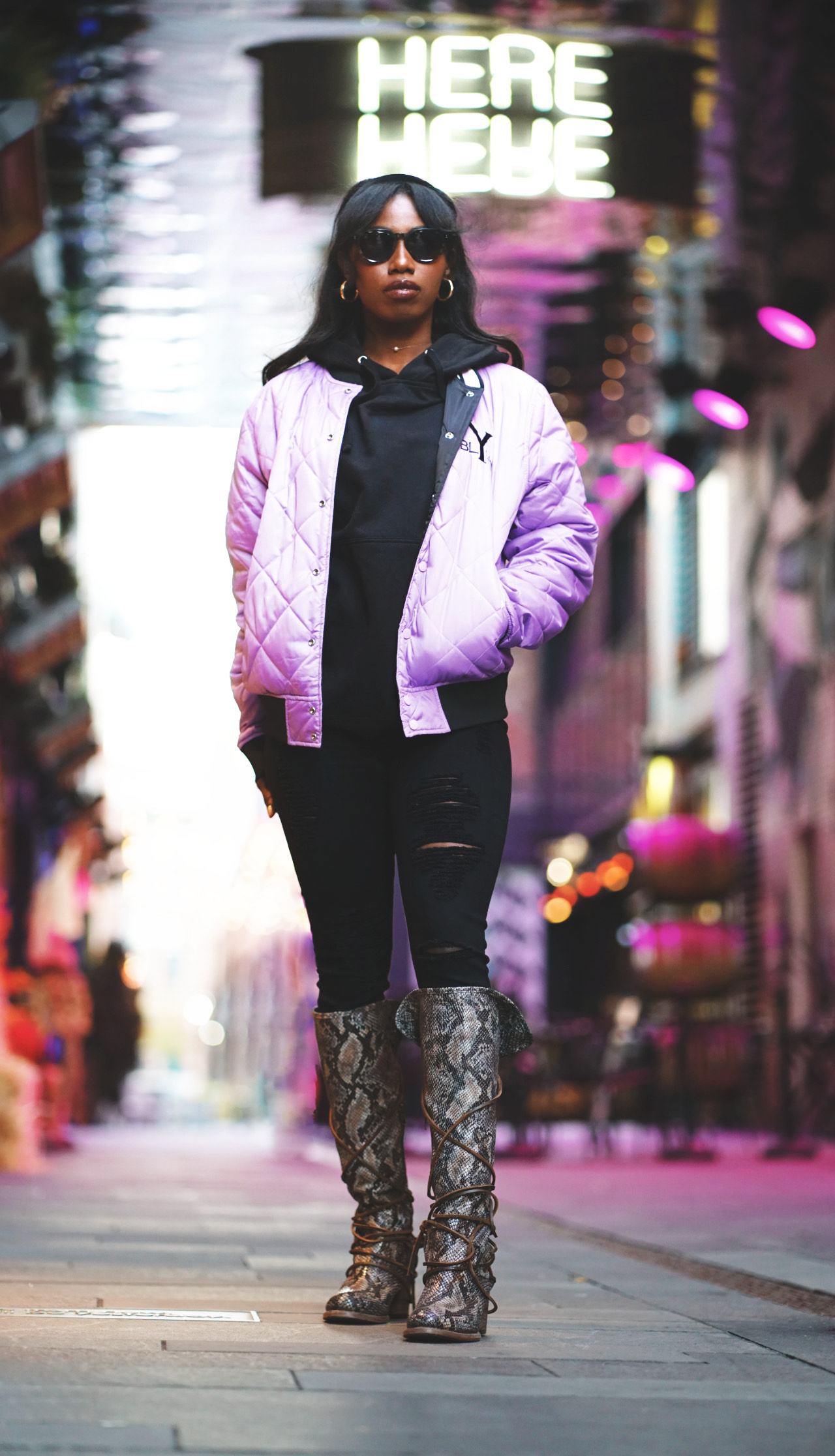 “Both of them, which are two of my favorite humans … [are] a part of my Y,” Apodaca said. “I thought the purple was a really cool way [for] people [to] identify with the brand, you know if they see that purple tag that we have on our clothing [and] if they see that color purple, they start to associate with the brand but at the same time, it has that deeper meaning of ‘hey like this is my family, this is my Y.’”

Apodaca’s Y gives BLYND the momentum to flourish. When he started the brand, he was yet to discover his Y. The lack of purpose affected the success of the brand. It wasn’t until Apodaca realized that his Y was the foundation for BLYND that the brand became everything he hoped and dreamed it would be. “I wasn’t blind to doubt, I wasn’t blind to fear, I wasn’t blind to limitation – all these things that I’m preaching,” he said.

“I’m now in this place where I have so much self-love I have so much belief, I have so much energy towards this like you know 5 p.m. to 2 a.m. … yeah I’m exhausted, but it’s like when you love and you’re passionate about something you don’t get tired,” he said.

In interacting with models, supporters and local community members, Apodaca always asks an important question: what’s their Y? Often, this question alone sparks conversations and allows these strangers to truly open up about themselves and their experiences.

In understanding a Y, an even greater message emerges: we can all stand to stay blynd towards barriers standing in the way. 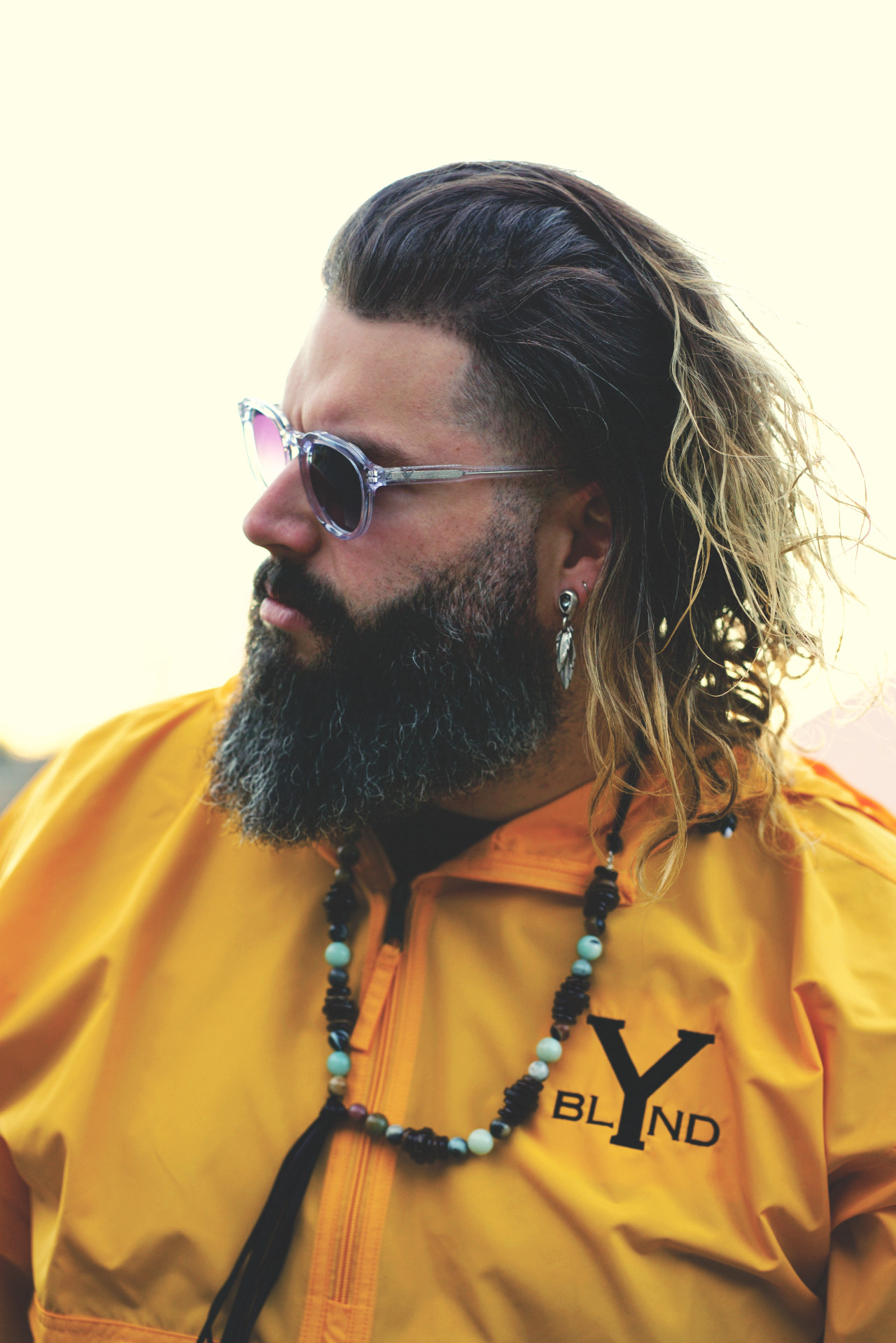