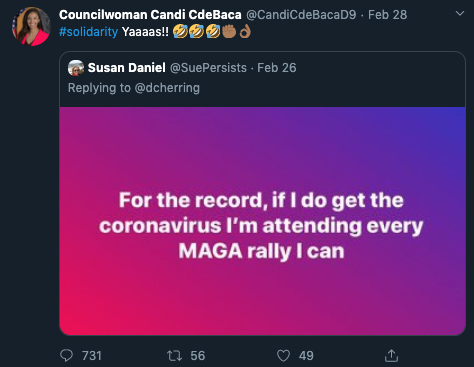 DENVER — A Denver councilwoman grew harsh criticism online Tuesday morning after one of her tweets from Feb. 28 resurfaced on the morning of Super Tuesday.

Councilwoman Candi CdeBaca had quoted a tweet reading, “For the record, if I do get the coronavirus I’m attending every MAGA rally I can” and wrote “#solidarity Yaaaas!!” with several emojis.

Her office responded to the criticism on Tuesday: “Councilwoman CdeBaca made a sarcastic tweet on Twitter to call attention to the Trump administration’s downplaying of the coronavirus as a ‘hoax,’ no more dangerous than the common flu. Rather than conservative outlets making a four-day-old tweet their focus on Super Tuesday, they should focus their energy on demanding a competent federal response to this public health crisis instead.”

“There can be no room in our politics for wishing harm on Americans who have different political beliefs,” he said. “Democrats in Colorado and across the country need to condemn this evil statement.”

CdeBaca’s office responded to this, saying this was not the first time or the last time somebody would push for CdeBaca’s recall over her comments.

“The Councilwoman will continue to focus on her priorities in her district and not on the mostly out-of-state conservative media who have targeted her since even before her election to office,” the office said.