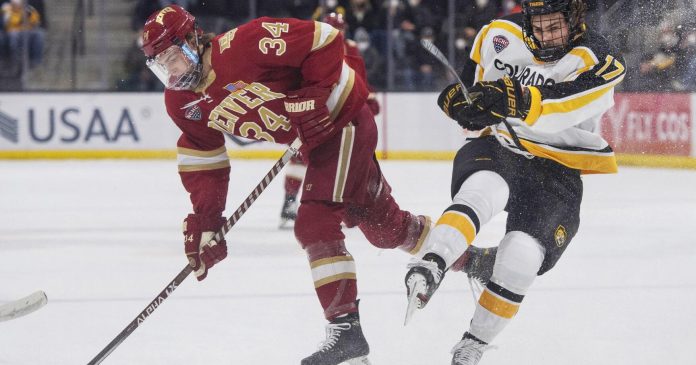 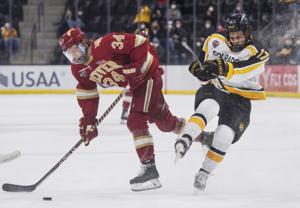 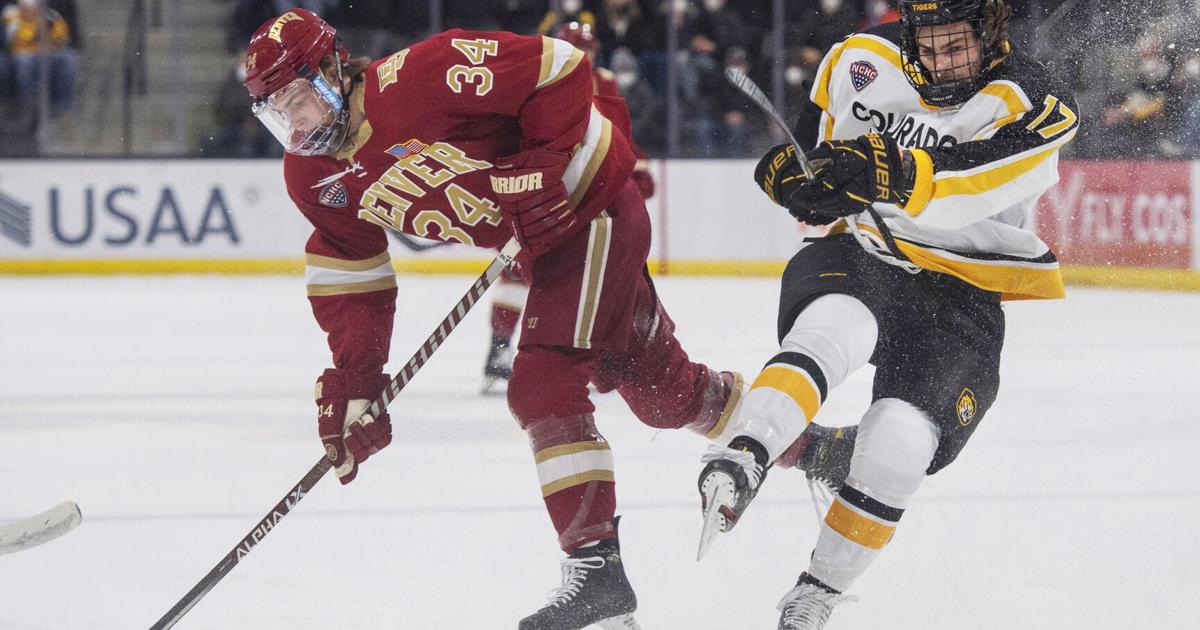 There’s no room for error when Denver is the opponent.

“They are going to create offense because of the talent they have,” Colorado College coach Kris Mayotte said on Thursday before the series with DU. “We can’t create any of our own problems.”

But 6:06 into the contest on Saturday, CC did create a problem.

It started behind the net, where Carter King snagged the puck away from the Tigers, before finding McKade Webster positioned in front of the crease. With no defensemen to make things difficult, Webster had a clean shot at the goal.

The sequence ended with a vulnerable Dominic Basse as the last line of defense, shifting to one side, but unable to stop the puck as it smacked into the net.

It wasn’t CC’s only miscue, and by the time play ended on Saturday at Ed Robson Arena, DU secured an 4-0 win, dominant series sweep, and the Gold Pan.

DU has won the Gold Pan three years in a row.

The Pioneers took a 2-0 lead before the opening period was over, with the second goal coming on a similar play to the first.

Carter Savoie applied a strong forecheck to create another turnover. He then corralled the puck and made a pass to Bobby Brink, who found Cole Guttman skating toward the net. The senior captain finished off the play for his second goal of the weekend, and his seventh on the season.

He started the second frame in the same way, and netted another goal to put DU up by three.

“Mistakes happen, turnovers happen. That’s the game,” Mayotte said. “But your response has to be a certain way, and you have to work, you have to put yourself in the right spots so that when it happens you can respond and you can recover from it.”

The outcome was the same as Friday’s 5-0 loss, but the Tigers created better chances for themselves on Saturday.

The first came just two minutes into the contest when Noah Prokop found Hunter McKown on a give-and-go. Then, with four minutes left in the opening frame, Brett Chorske secured the puck off a DU turnover and fired a shot from close range.

But both attempts had the same result, a Magnus Chorna save. The junior, who was named NCHA goaltender of the week last week, finished the game with 16 saves. He has a .909 save percentage on the season.

“We had some good chances,” CC captain Bryan Yoon said. “That’s just those quick puck movements, and just getting off the wall and into the net.”

Then, Patrick Cozzi and the Tigers thought they had their first goal of the weekend with 2:24 left in the second. Cozzi shot from the left faceoff circle, and the puck flew into the net, igniting the flashing red light. Cozzie threw his fist in the air, and the CC faithful cheered. But the celebration lasted a mere moment, as the officials waved off the score due to goalkeeper interference by Prokop.

“You can convince me that the goal shouldn’t have counted, but the explanation was that our guy had intent going into him, which, I saw it differently,” Mayotte said.

A barrage of penalties in the final frame led to a DU 4-on-3 which resulted in a goal from Sean Behrens with 17:40 left in the game.

As Colorado College and Denver prepare to play for Gold Pan, here’s a look at the series history

Colorado College ready for rivalry series against No. 5 Denver