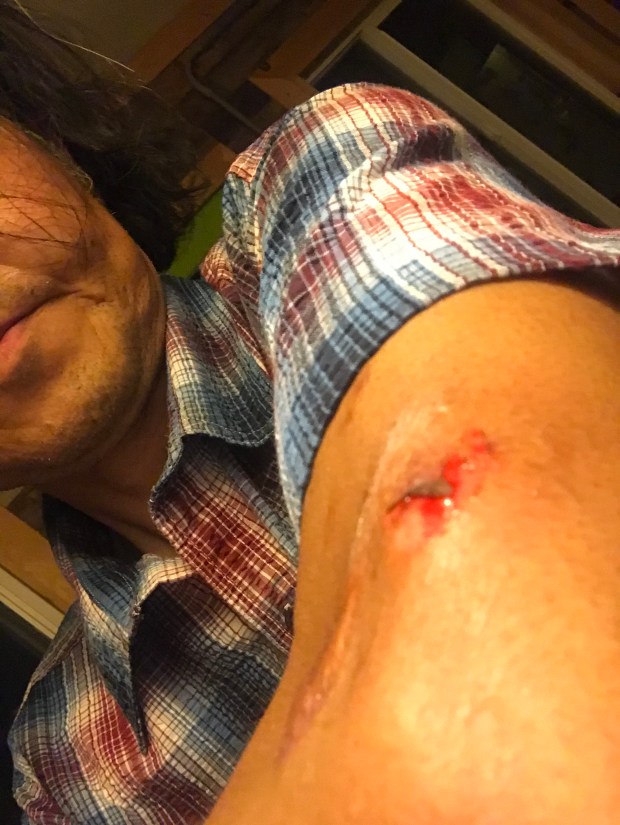 Denver police officers on Thursday night struck a Denver Post photographer with pepper balls, causing a cut on his arm and shattering the press credential hanging around his neck.

“If it was one shot, I can say it was an accident,” Chang said. “I’m very sure it was the same guy twice. I’m very sure he pointed at me.”

Denver Post reporter Elise Schmelzer said officers fired at least one pepper ball at her feet as she was covering the protest. She was wearing a reflective vest that said, “Press,” on it.

The Denver Post has reached out to the Denver Police Department to complain about the officers firing directly at a photographer.

Chang was at the corner of 14th Street and Sherman Avenue when police started pushing protesters away. Chang said he was on the sidewalk taking pictures. He had been standing near the officers for a while while wearing a media badge and carrying two large cameras and lenses.

Officers did not ask him to move, Chang said, so he continued taking pictures. The first ball hit him in the chest, and while he was holding his camera to his chest, a second round struck his left elbow, tearing his coat and cutting a gash into his skin.

Chang said he began walking south to escape the pepper stinging his eyes and burning his throat, continuing to shoot pictures with a wide angle lens as he went. Protesters helped by pouring milk onto his face to wash off the pepper.

Chang did not seek medical treatment but is resting at home.

Chang has worked at The Denver Post since 1997 and said it was the first time he had felt targeted by police while covering an assignment. He later saw Minneapolis police arrest a CNN news crew on live television. They later were released from custody.

“I feel a little weird in this situation,” Chang said. “News people and TV crews are targeted.”

The Colorado Press Association and the Colorado Freedom of Information Coalition said police officers need to be reminded that journalists have a First Amendment right to cover public demonstrations without law enforcement interference.

“As long as they are not interfering with officers, journalists have a First Amendment and state constitutional right to record and document the activities of police and protesters in public spaces,” Jeff Roberts, executive director of the CFOIC, said in an email. “Plus, the Colorado legislature in 2015 enacted a law that specifically underscores the right to record police. If an officer “intentionally interferes” with a person’s lawful attempt to record an incident involving a peace officer, that person has a civil right of recovery against the law enforcement agency.”

Jill Farschman, press association CEO, said, “There seems to be a frightening trend of restraining and targeting reporters during public protests and other civil unrest even when clearly displaying press credentials. Let me stay with clarity that any infringement on our First Amendment right to a free press not only undermines the safety of reporters, but oppresses the public’s access to live news coverage which is completely unacceptable.”