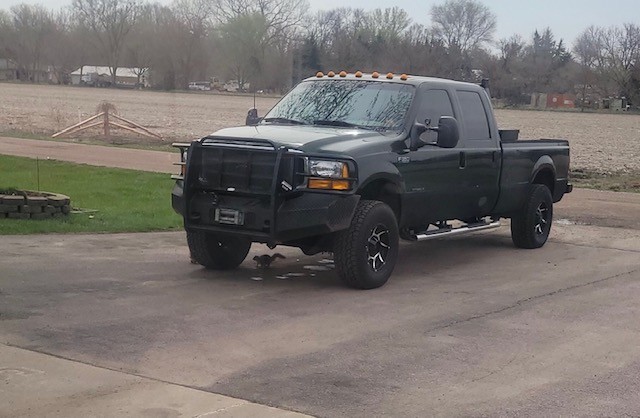 DENVER — A South Sioux City, Nebraska, couple didn’t get the Colorado welcome they were looking for when they came for their son’s medical treatment in mid-March.

Instead, they got their pickup stolen.

Their young son, Landon Merithew, is recovering, and thanks to Denver7 viewers, they got a boost they never saw coming.

Aaron and Cheyanne Merithew drove more than 600 miles so Landon could receive botulinum injections for his cerebral palsy-related joint pain.

They were getting ready to head back to Nebraska on March 18 when they discovered their Ford F-350 was gone.

“Initially, I thought it was just towed,” Aaron Merithew said, “so we called Aurora Impound, and they didn’t have it.”

That’s when the couple realized it had been stolen.

“It just kind of hit me like a gut punch,” Aaron Merithew said. “It was just completely baffling that there’s still that kind of evil in this world.”

Contact Denver7 got the word out about the couple’s predicament.

A security guard who saw our story spotted the pickup in a parking lot on East Del Mar Circle in Aurora.

Generous Denver7 viewers have also contributed to a fund to help the Nebraska family. Denver7 Gives used the money to fly the family out to retrieve their vehicle and to help them get ahead on some bills with more than $10,000.

“We just so appreciate everything that everyone has done,” Cheyanne Merithew said. “It’s helped us view the world differently. It was a bad situation that got worse type of thing, and people were just like jumping in to help.”

Aaron Merithew said the F-350 was damaged by the thief or thieves and needs some repairs. He said he got the vehicle home only to have the engine break down a few weeks later.

They had planned to drive the Suburban to Colorado for Landon’s doctor’s appointment, but it broke down, too.

“The engine just completely grenaded on it, so we were forced to take my truck out there,” he said. “That’s where the bulk of [these donations] are going — to replace and put a brand new crate engine into that Suburban.”

As for Landon Merithew, the couple said he’s improving.

“He has been doing amazing,” Cheyanne Merithew said.

The young boy, who was diagnosed at 5-months-old with quad-spastic cerebral palsy, is getting a lot of exercise trying to walk.

Cheyanne Merithew said her son is now experiencing some kidney issues. His left kidney had already been removed, and if things don’t improve, he may have to have a transplant for the remaining kidney.

The Merithews remain optimistic and are giving thanks to everyone who provided help.

“It means the world that everyone would drop what they were doing and help us,” Cheyanne Merithew said. “It really does.”