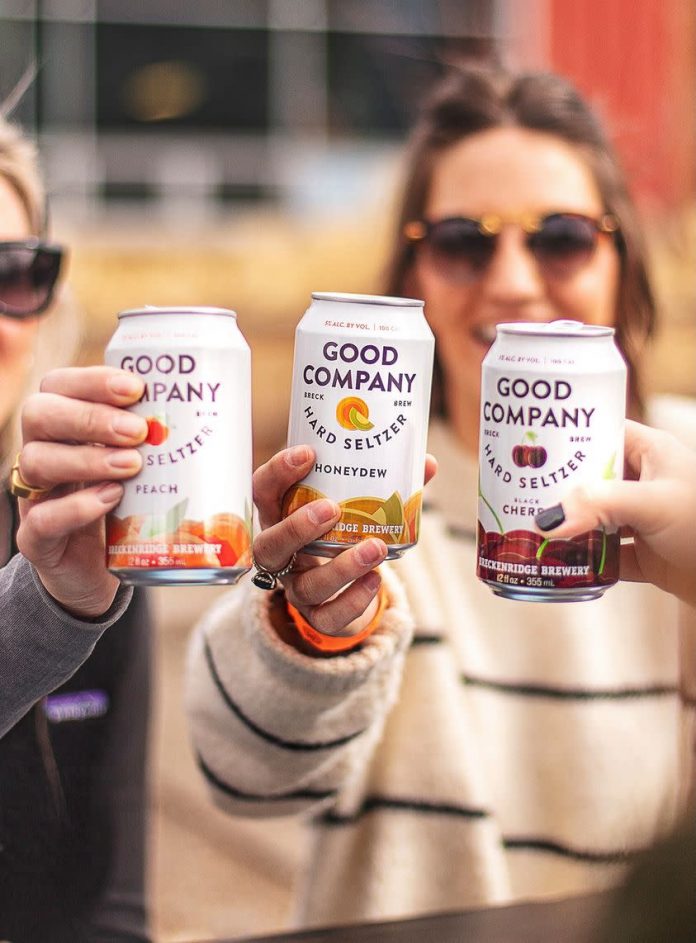 Wine, beer, cider or spirits. For a long time, it seemed like these were the only options for buzzy beverages. But a few years ago, a bevy of hard seltzers hit the drink scene, culminating in what beverage industry insiders and social media trendsetters deemed “White Claw summer” in 2019.

Since then, many craft brewers have set their sights on perfecting the hard seltzer. Often lower in carbs, calories and ABV (that’s Alcohol By Volume) than traditional alcoholic drinks and usually gluten-free, hard seltzers are the perfect sippers for long, sunny days.

After several taste panels and in-house ingredient mixology, the Great Divide Brewing Co. team created a seltzer to showcase the true flavors of its all-natural ingredients. While some hard seltzers tend to taste like syrup, Whitewater is dry and only slightly sweet, with no added sugars. The four flagship flavors are Mango + Ginger, Wild Berry, Pomegranate + Lime and Ruby Red Grapefruit and are available year-round. And the brewery just introduced a Lemonade seasonal seltzer, along with four new cocktail-inspired flavors that are sure to be the life of the party: Piña Colada, Mimosa, Mojito and Margarita. Visit the Great Divide Brewing Co. in downtown for these and new and experimental flavors on draft.

Dry Dock Brewing Company is known for its best-selling and award-winning Apricot Blonde Ale, so it’s no surprise that they’d excel at fruit-forward hard seltzers. Dry Dock uses all-natural fruit extracts to create unique flavors you won’t find from any other brands, including Ginger Lime, Sour Raspberry, Pineapple Coconut and, of course, Apricot.

Ska Brewing Company’s gluten-free line of hard seltzers debuted in 2019 with three flavors: Black Raspberry, Hibiscus Lime and Blood Orange. Last year, they added a new line of wildly tantalizing cocktail flavors to transport you to the tropics: Pomegranate Mojito, Paloma and Piña Colada. All of Ska’s hard seltzers are made with natural fruit extracts. You can find Ska Hard Seltzers at their world headquarters in Durango or their Ska Street Brewstillery in Boulder, or pick up a 12-pack closer to home at select liquor and grocery stores.

Coors Brewery in nearby Golden launched Coors Seltzer with a mission: to taste good and do good. For each 12-pack of Coors Seltzer purchased, the brewery helps restore 500 gallons of freshwater to America’s rivers through a partnership with Change The Course. And did we mention that it’s delicious? Coors Seltzer is crafted with alcohol from real cane sugar and comes in four flavors: Black Cherry, Mango, Lemon Lime and Grapefruit. And, for a trip down memory lane, they’ve introduced a seasonal Orange Cream Pop Seltzer just for summer. Drink a Coors and help save a river!

Oskar Blues’ leads the pack when it comes to sheer number of seltzer varieties, with 13 innovative flavor combinations, many of which you won’t find anywhere else: Yuzu Pineapple, Mango Mai Tai, Citrus Spritz, Fruity Sangria, Habanero Piña Colada, Yumberry, Strawberry Coconut, Melon Basil, Cucumber Peach, Tangerine Lime, Lemon Agave Hibiscus, Blueberry Mango and Black Raspberry. The name comes from Wild Basin, a pristine basin nestled in the mountains of Colorado along the St. Vrain River. Wild Basin utilizes water from that same river to create a drink as clean and pure as its Rocky Mountain origin. Bonus: a portion of each purchase goes to Can’d Aid, a nonprofit that supports river and beach cleanups across the country. Get Wild (Basin) at Oskar Blues’ locations in Lyons, Longmont, Boulder and in downtown Denver.

The tastemakers at Epic Brewing spent 18 months perfecting their Pakkā Hard Seltzer, searching for the point where sweet and dry, fruity and crisp, and refreshing and flavorful meet. And it’s been a success! Pakkā is one of a few hard seltzers on the market that uses real fruit as the main ingredient. Head over to their River North Art District (RiNo) taproom to sample each of Pakkā’s five flavors: Citrus Sunrise, Grapefruit Tangerine, Cherry Lime, Mixed Berry and Black Cherry.

Edgewater’s first brewery is now the neighborhood’s first to offer craft seltzer! Stop by the taproom to try Joyride Brewing’s rotating seltzer flavors, like the summery Cherry Limeade or the Citra Orange, which stands out for its addition of hops — an ingredient usually reserved for beer.

Call to Arms calls their hard seltzer “La Clawsuit.” We’ll leave it to you to figure out the name. Instead, we’ll simply say that all of their ever-changing flavors — Cucumber Yuzu, Hibiscus Orange, Mango Passion Fruit and Peach Orange Guava — are brewed with real ingredients.

Who doesn’t love a pastry-inspired pun? Try this one on for size: Baere Brewing’s “Baere Claw” Seltzers. Some recent flavor iterations include an agua fresca-inspired Cucumber Hibiscus Lime Mint made with Real Dill cucumber juice, lime juice from Source of Nature, hibiscus from Savory Spice and homegrown mint. A new favorite is the tart and juicy Key Lime.

Mile High brewers are churning out so many mouthwatering seltzers it’s tough to keep up! Here are a few more favorites to add to your list: