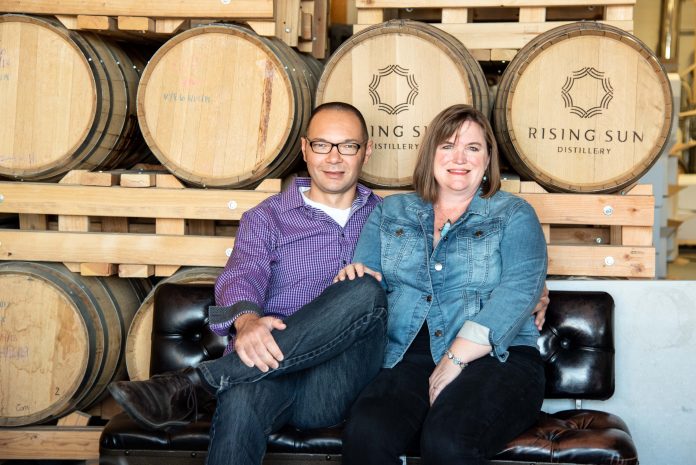 It takes a lot of hard work and perseverance to own a small business in any climate, let alone the challenges 2020 has presented. For owners Dawn and Sol Richardson, Rising Sun Distillery has not only been a hotspot for local and organic liquor but also an intercessor for community outreach.

Whether it was a combination of fate or destiny, both Dawn and Sol were meant to be distillers and entrepreneurs. In fact, it runs in their blood. Having always wanted to start a business together, this couple had their sights on opening a beer garden in 2012.

“A beer garden piqued our interest, but we couldn’t do it at the time. Instead we chose to open a distillery. It took us a while to get the permits, location and learn how to properly distill spirits but eventually it worked out,” Sol said.

It wasn’t over night that Rising Sun came to life but rather through trial and error.

“It’s basically like cooking. A lot of recipe testing and mash making. It was all out of our basement at first. Well, distilling water out our basement,” Sol laughed.

In 2015, the Richardson’s opened their first of two brick and mortars. One in Denver and the Frisco  location opened in August 2020. 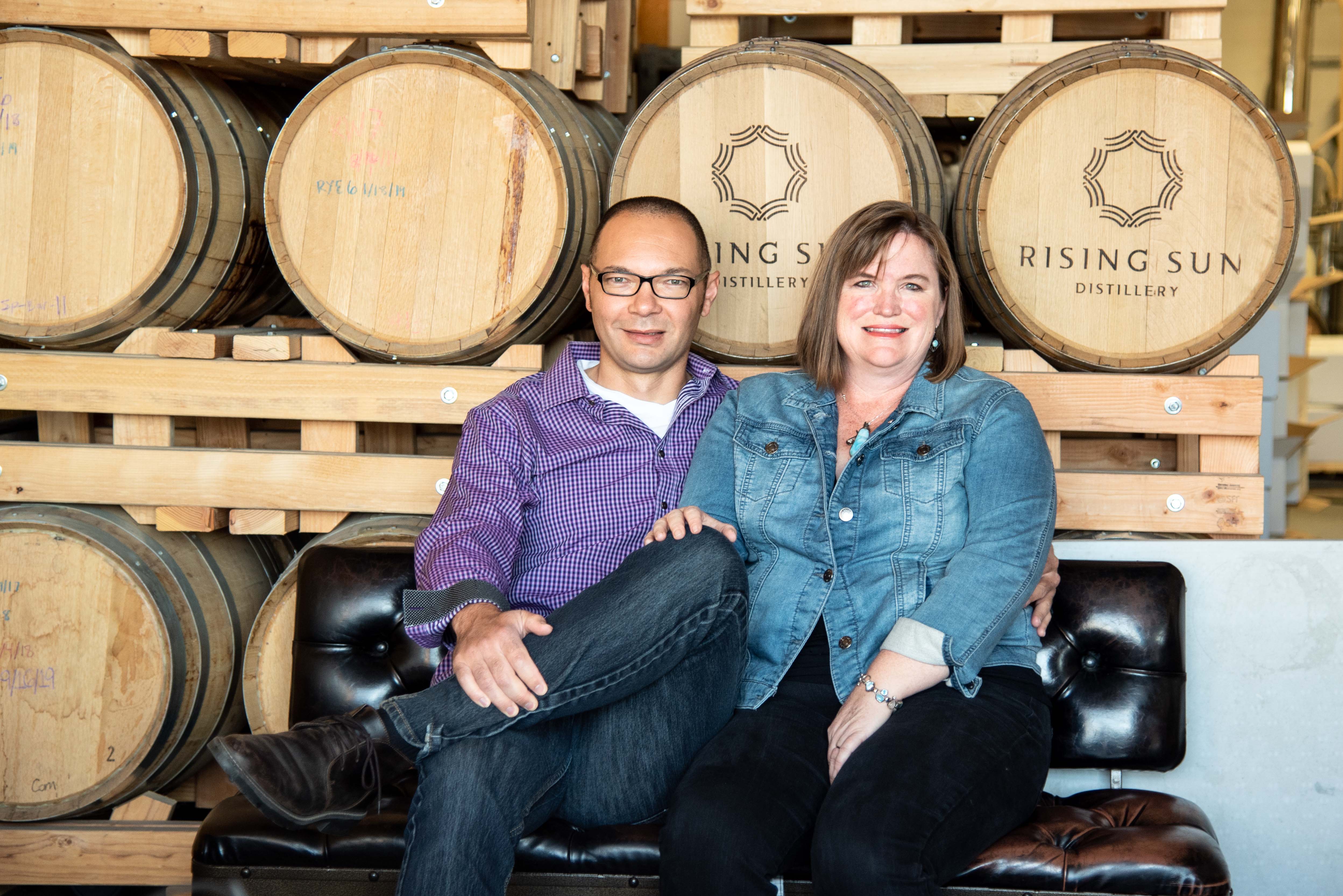 As it came closer to opening their first distillery, Dawn discovered that her family had distilled moonshine cider from pears during the prohibition era. While the distilling bug was passed down to Dawn, a variation of that found its way to Sol’s family tree. His grandfather, Elbert Richardson Jr., who moved to Colorado from Texas in 1946 was a small business owner in the Five Points neighborhood of Denver. He owned a bar during the ‘80s and ‘90s  which has since closed and is now home to a Denver staple—Rosenburg’s Bagel and Deli. His grandfather was also influential in establishing Denver’s annual Juneteenth celebration and was an advocate for Black entrepreneurship and social justice in Colorado. It was a combination of Sol’s father who earned a doctorate in education and his grandfather’s advocacy for Black equality that led him to value the real importance of diversity.

“Growing up in Colorado Springs, there wasn’t a lot of diversity. With all that my grandpa accomplished he made me believe there was more equality than there really is. 2020 has reminded me that we still have a long way to go. Creating opportunities was his legacy, and I’ve come to learn that we need more Black owned businesses,” Sol said.

Though the year has provided many challenges for distilleries, the Richardson’s have still found ways to give back. The team has continued to support various local charities from Mercy Housing, Florence Crittenton of Denver — which helps single mothers with education opportunities — and some in-house comedy nights featuring local Black comics. Back in March when toilet paper and hand sanitizer were scarce, the distillery also made and distributed hand sanitizer to essential businesses and first responders.

While the owners have a heightened sense of social justice and a strong connection to the Colorado community, their mastered distilling skills are simply an added bonus.

Working closely with local farmers and growers, a lot of the organic spirits at Rising Sun are unique to Colorado flavors. With a list of about 10 products including a lavender hibiscus liquor, Palisade peach brandy and Pueblo chile white whiskey, the women led taprooms have crafted many intriguing cocktails.

In fact, October brings Rising Sun’s first major collaboration with another Colorado favorite, Epic Brewing. The Dark Angel whiskey uses three of the Big Bad Baptist malts to heighten the whiskey’s beer profile. The distillate is blended and aged in used Big Bad Baptists barrels in combination with New American Oak spirals to add oak, toast and vanilla flavors. The initial batch is limited to 600 bottles featured at both Denver and Frisco taprooms along with select retailers along the front range.

“We’ve wanted to distill beer for a while but haven’t gotten around to it. Using similar grains, I like to say it’s the spirit of the beer. It has real beer essence,” Sol said.

While October 2020 is a landmark month for Rising Sun and its new whiskey collaboration, November is just as important for them. Being an election year, the entrepreneurs and social advocates behind one of Colorado’s Black owned and woman led distilleries encourage the practice of democracy. 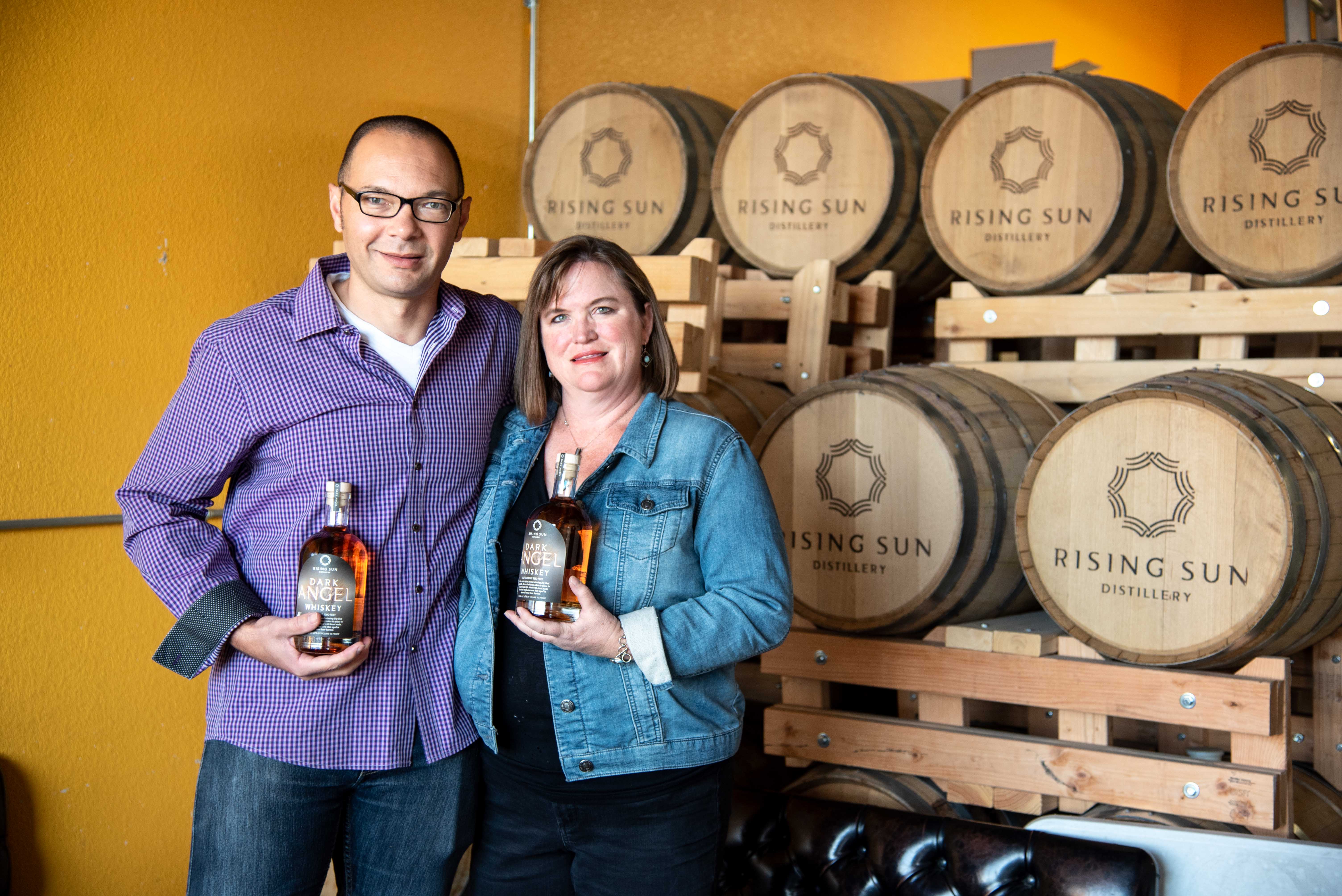 More information about the Dark Angel whiskey release can be found here.

All Photography By Madison McMullen