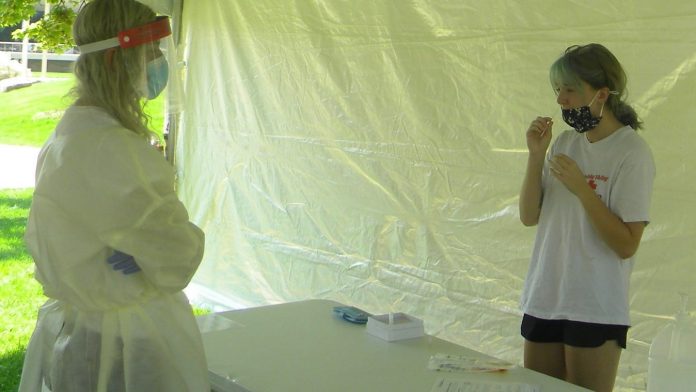 Despite a rapid rise in cases of the virus that causes COVID-19 on campus over the past 2 ½ weeks, there was a bit of a celebratory mood Friday at Colorado State University.

More than 22,800 students were able to receive some level of in-person instruction during the fall semester, and the university made it through to its planned transition to remote learning following the Thanksgiving break.

“We were very excited that we were actually able to get through and keep the university open and do it in — we don’t want to say safe just because we can’t guarantee safe — but as risk-mitigated as we can,” said Lori Lynn, associate director of the CSU Health Network. “I think we really did a great job of trying to manage cases and actively test and employ strategies that helped us to really keep the classrooms open and students able to attend and mitigate as much risk across campus as we can.”

COVID-19 in Colorado tracker:Larimer and state case, death and hospital data for November

Since Nov. 1, CSU has reported 519 new cases of COVID-19 as of Friday. That represents nearly 47% of all the 1,242 cases it had reported since Aug. 17, when students began moving into residence halls. Of the cases since Nov. 1, 489 were students and 30 were faculty or staff members, according to the university’s COVID-19 dashboard.

As alarming as those figures are, the university actually had a lower incidence of positive tests than Larimer County as a whole in that time frame. Through Friday, Larimer County had reported 3,255 new cases in November, a total that represents more than 54% of its 5,971 cases since Aug. 17.

“One of the early concerns was would the university potentially drive an increase in cases, and really we have done better actually than the county,” Lynn said.

There has not been a single known case of transmission in a classroom setting on campus, she said. The 22,864 students enrolled in classes with at least some in-person instruction this fall generally followed the protocols of social-distancing, wearing masks and wiping down their desks or other work spaces both at the start and end of each class.

“We saw probably the highest transmission in the residence halls, where students would gather after class,” she said. “They might get four, five or six people in a room, with no masks, and spread the virus in that setting. It really was more of the social gatherings and the outside activities, not classroom transmission.”

She credits the university’s “robust testing” program for keeping the rate of cases on campus lower than those of the county’s general population. CSU has mandated testing for students living in residence halls, university apartments, some off-campus apartment complexes and fraternity and sorority houses, and the results of those tests allowed the university to isolate and quarantine those who tested positive and their close contacts relatively quickly, she said.

Through Nov. 12, the last update available when this story was written, CSU had conducted more than 24,688 nasal swab tests and 18,670 saliva screenings for COVID-19 on students, faculty and staff since Aug. 17. There were 582 confirmed cases of COVID-19 from those tests, the university reported. Those who test positive through a saliva screening are given a polymerase chain reaction, or PCR, nasal swab test for confirmation, Lynn said.

Most students who have tested positive have experienced either no symptoms or relatively mild symptoms similar to a cold or season influenza, she said, and only one that she’s aware of has required hospitalization.

CSU has been able to test as many as 1,500 people a day on campus, she said, and hopes to ramp that up if students are able to return to campus for in-person and hybrid learning when the spring semester begins Jan. 19.

CSU announced plans earlier this month to conduct the spring semester much the same way as the fall semester, with about 64% of classes having some form of in-person instruction on campus through the first 12 weeks leading up to a delayed spring break April 12-16. Under that plan, all classes would shift to remote learning for the final four weeks of the semester so students, faculty and staff who travel during the break will not need to return to campus afterward, an effort to limit the spread of COVID-19.

‘We are not ok’:Poudre School District parents push back against remote learning shift

That plan was made before the recent spike in cases locally, statewide and nationally and might need to be modified in consultation with the Colorado and Larimer County health departments, Lynn said.

CSU’s health officials speak to the Larimer County Department of Health and Environment three to four times a week. The county health department has told CSU it won’t be able to provide “firm guidance on what opening may look like until two to three weeks out,” Lynn said.

“So, we’re trying to develop a couple of different contingency plans on could we open up as we did in the fall or does it have to look like something different? We just don’t know.

“… It’s really going to hinge on what happens in the community in the next six to eight weeks as we go through the holidays.”

Testing: Where to get a COVID-19 test in Larimer County

Contact Coloradoan reporter Kelly Lyell at kellylyell@coloradoan.com, follow him on Twitter @KellyLyell and find him on Facebook at www.facebook.com/KellyLyell.news. Support his work and that of other Coloradoan journalists by purchasing a digital subscription today.