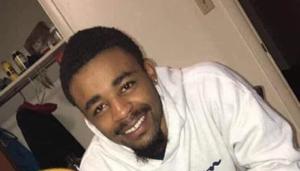 De’Von Bailey and his cousin, Lawrence Stoker, were stopped by police investigating a report of an armed robbery on Aug. 3 in a neighborhood southeast of Memorial Park.

Police body camera footage showed officers approach Bailey and Stoker, and question them about the reported robbery. When one of the officers goes to search Bailey, 19, for a gun, he drops his arms, turns and runs away, the video shows.

Police said Bailey failed to comply with shouted orders to raise his hands. He is seen in the video running with his hands in front of him.

Bailey was shot four times in the back and elbow by officers Alan Van’t Land and Blake Evenson, who were reportedly fearful that he was reaching for a gun.

The body-cam footage released by investigators confirmed Bailey was armed, showing officers removing a pistol from his pocket after he was on the ground in handcuffs.

But the footage, along with video from a surveillance camera obtained by The Gazette, led to demonstrations protesting police brutality and claims of racism. The two officers involved in the shooting are white.

“It is certainly not a surprise to get a bad result when a tainted investigation is presented by a biased prosecutor,” Mari Newman, a lawyer for the family, said Wednesday. “This is the exact reason why we have called for an independent investigation and an independent prosecution from the beginning.”

Darold Killmer, another attorney representing Bailey’s family, said the officers’ claim they shot in self defense was disproved by the body-cam footage.

“Officers are trained to be restrained on their use of deadly force,” Killmer said in August. “In this instance, the video shows that there was no evidence that anyone was imminently at risk of being killed or harmed.”

May announced the grand jury’s unanimous decision during a news conference in Cripple Creek, where he is attending a murder trial.

May defended his record in prosecuting officers when necessary. At least 30 law enforcement officers have been prosecuted during his time as DA for such offenses as domestic violence and sexual assault on a child, he said.

“These are some of the best videos of an officer-involved shooting that I’ve ever seen,” May said, referring to how viewers can see the episode unfold from the perspectives of both officers who fired and others who were present.

In a statement released following May’s announcement, Colorado Springs Police Chief Vince Niski acknowledged the community’s outrage, reiterating that officers “do not take our responsibilities to our citizens lightly.”

“There is no doubt that the community of Colorado Springs has been tested over the last few months,” Niski said. “What happened on Aug. 3, 2019, is something neither police officers nor citizens ever want to experience. The loss of a son, a friend, a community member, is a devastating event that impacts all of us.

“We believe in open communication and partnership with our residents, and we fully acknowledge that there was been confusion and frustration surrounding this incident,” the statement continued. “Especially the limited amount of information that could be released to the public.”

After the release of the body-cam video, leaders of the Colorado Springs black community and attorneys for the Bailey family demanded an independent investigation.

They argued that the close ties between the Police Department, DA’s Office and the El Paso County Sheriff’s Office, which investigated the shooting as a neutral agency, raised questions about bias and conflicts of interest.

Terry Thomas, a Colorado Springs pastor who joined the Bailey family at protests, said Wednesday that he was disappointed in the grand jury’s decision, reiterating that it confirmed the community’s belief that an independent review is necessary.

“Although I was hoping for a different outcome, I was almost expecting it because this is par for the course and this is typical,” Thomas said. “Because it seems that when it comes to our people being the victim, the outcome is almost always the same. … This is evidence and proof that the system that we have here — the city investigating the county and the county investigating the city — that the system cannot be trusted. Changes need to be made.”

In response to the protests, Gov. Jared Polis issued a statement in support of the demands, saying an independent investigation would help restore trust. Colorado Springs Mayor John Suthers, while supporting the release of the body-cam footage “as soon as possible,” placed his faith in local law enforcement agencies.

May said Wednesday that he does not believe the “system is flawed,” and that in its report, the grand jury discussed how police are forced to make “split second decisions.”

Click here for The Gazette’s full coverage of the officer-involved shooting.