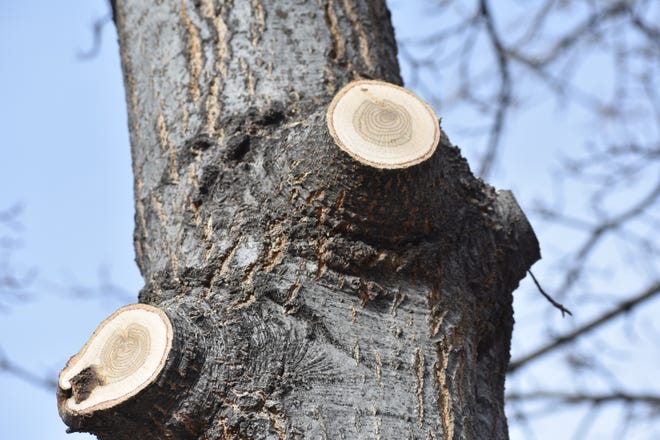 If your tree branches were among those lost during the heavy snow this weekend, you might need to do some pruning.

But before you get out the pruners, here are some tips on what and how to prune once it’s safe to do so.

Note: The below information was originally published by the Coloradoan in February.

Have a pruning plan

Before you start cutting branches, ask yourself what it is you are trying to accomplish.

Reasons for pruning include the branches being dead, diseased, broken, overgrown or misshaped. Dead, diseased or broken branches should be pruned immediately, no matter the season.

For dead branches, avoid cutting into live tissue. Cut at the nearest point between dead and live tissue.

For diseased branches, disinfect your pruner blades between each cut with a solution of water containing 10% bleach.

Unless it’s a natural multi-stem tree, your goal should be to prune so there is one dominant leader. Determine the leader branch and then you can go to work.

Look for branches that are rubbing, especially common in trees such as aspen, ash, crabapples and Canada red chokecherry.

Prune branches that are growing upright in the center of the tree that could rub on other branches.

To shape a tree, step back and look for branches that stick out from the natural shape of the tree. Cut one branch at a time and then step back, assess the shape and determine what other branches may need to be removed.

It’s best not to remove more than one-quarter of a tree’s branches in a year, as that can affect its growth and health.

With newly planted trees, only prune dead, damaged or crossing limbs or those interfering with the main stem.

Snow totals:You might be surprised how accurate meteorologists fared

Always prune just outside the branch collar, which is the raised or swollen area of the branch near where it meets the main trunk. It usually has wrinkled bark.

For larger branches, use a three-step pruning process:

Tools for the job

Use hand pruners for branches less than a half-inch thick.

Use loppers for branches 1 to 1.5 inches in diameter.

Hand pruning saws can be used for a wide array of branches.

Use chain saws for larger branches.

When you’re done, you can either use your trash can or yard waste bin, or haul the branches to a recycling yard such as Hageman Earth Cycle, 3501 E. Prospect Road, for a fee.