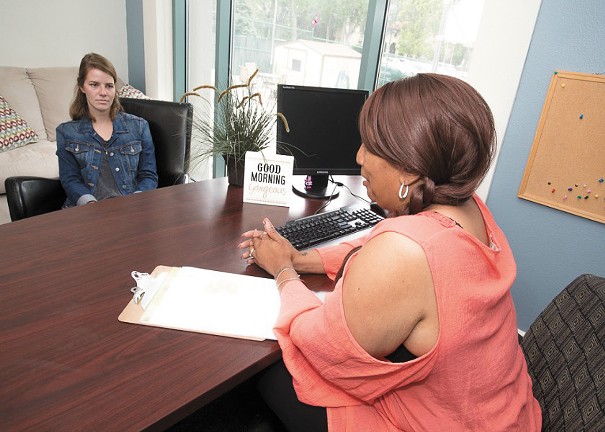 The COVID-19 pandemic means we’re all battling an invisible enemy. We’re scrubbing hands, bleaching counters and fastening on masks before leaving the house, all in an effort to thwart the novel coronavirus.

Yet many people are fighting a familiar, but suddenly less visible and arguably more sinister, foe: domestic violence.

“The calls that we are receiving and … the clients that we’re working [with], the cases have been more severe in nature,” says Anne Markley, interim CEO of TESSA Colorado Springs. TESSA provides free, confidential services to victims of domestic violence and their children, which can include safe housing, advocacy and legal help.

“We do always receive severe calls, but there have been more severe calls in a shorter amount of time than what we’re used to seeing, and very uniquely severe also,” Markley says.

As many continue to stay inside during the state’s safer-at-home order, service providers worry about more than intimate partner violence. State and local agencies have seen a sharp decline in the number of people reporting child abuse, as well as abuse of at-risk adults, such as those with disabilities.

“Kids are not in front of mandated reporters” when they’re quarantined at home, says April Jenkins, intake manager for El Paso County’s Children, Youth and Families Services. Those mandated reporters — such as teachers, counselors and primary care providers — are required by law to call child protection when they fear a child is neglected or abused.

The same is true for reports of abuse or neglect against at-risk adults, says Aric Bidwell, Adult and Family Services manager for the county. In that category, mandatory reporters are slightly different, but they’re still less likely to be around the people they serve right now, a possible reason for the decline in reports.

Law enforcement, government agencies and service providers say that the stresses surrounding the pandemic — fear of getting sick, loss of jobs or separation from family — drive up the likelihood that violence, abuse or neglect will occur. And when victims are isolated from the larger community, they face far greater risks.

In total, the Colorado Springs Police Department handled about 22 percent more domestic violence cases in the first quarter of 2020 (January, February and March) than it did during the same period last year, according to department data. The number of felony domestic violence cases, which often involve serious bodily injury or the use of a deadly weapon, increased by 45 percent over that same time period from 2019 to 2020 — a difference of 63 cases.

More recent data, including cases in April, weren’t available from the police department before the Indy’s deadline. But at the April 21 meeting of El Paso County’s Board of County Commissioners, 4th Judicial District Attorney Dan May raised an issue that he said had recently come up.

“In the first couple of weeks of being shut down [since the March 26 stay-at-home order], my office saw a reduction in domestic violence cases, particularly in the misdemeanor area,” May said.

“Today … misdemeanor cases are still way down,” he continued. “Our felony cases are skyrocketing.”

The DA’s office saw 61 more felony domestic violence cases between March 1 and April 24 than during the same period last year, according to a spokesperson — and the severity of incidents is spiking as well.

In an interview, May later said that his office was hearing similar stories from nurses at UCHealth Memorial Hospital who treat domestic violence victims.

Victims were essentially being “held captive” by perpetrators, sometimes suffering multiple broken bones, strangulation or brain bleeds, May says. What’s more, some judges had been offering lower bonds than usual for people charged with domestic abuse — potentially putting the victim back in a dangerous situation.

May says judges may be more lenient out of consideration for the health risks posed by the pandemic, as state and local authorities have tried to free up room in the jail to prevent outbreaks. He pointed to one recent case involving a domestic violence charge with attempted murder: “Normally that’ll carry a $50,000 bond, and that case was set at $6,000.”

In an effort to address the spike in cases, May says his office has placed three deputy district attorneys on call 24/7. Law enforcement can call the attorneys after making an arrest so that they can “immediately” go to court and argue for higher bonds to protect the victims. The stay-at-home order, which confines households into a small space, creates a “pressure cooker situation where domestic violence thrives,” says Susan Chadderdon, one of those on-call deputy district attorneys.

“What we would recommend to any victims that are in an abusive situation right now, is that, one, the stay-home order doesn’t pertain to them,” Chadderdon said. “The resources that are available for domestic violence victims are considered essential.”

Markley, of TESSA, echoes that message, emphasizing that some perpetrators of domestic violence may want to use stay-at-home orders as a tactic to keep victims confined. Although TESSA wasn’t, as of press time, accepting walk-ins at its office location, Markley stresses that the nonprofit has resources to respond to anyone who may be in need.

It maintains phone numbers for several on-call advocates who can be reached directly between 8 a.m. and 5 p.m. Monday through Friday (see resources below). People can call TESSA’s Safe Line number for free, confidential assistance at any time — or, if it’s unsafe to make a phone call, they can use the new chat function on TESSA’s website.

TESSA isn’t required to report incidents to law enforcement (except in situations involving child abuse or neglect), but it works closely with the police department and district attorney’s office and can help people who do choose to press charges, Markley says.

And while some domestic violence survivors have been moved from TESSA’s safe house to other safe, alternate locations to promote social distancing, Markley says the nonprofit can likewise provide a place to stay for others who need one.

“We don’t want people to think … because everything else in the community is closed, that we’re closed too,” Markley says. “We are here, and in fact we’re here in increased ways right now for you.”

Other organizations providing resources include Haseya Advocate Program, which serves Native American abuse survivors, and Voces Unidas for Justice, which offers cultural and linguistic services for the Latino community. Haseya Advocate Monycka Snowbird says her organization can still meet with people one-on-one at its office, in their homes or at a safe alternate location — such as the nonprofit’s garden in the Hillside neighborhood — though the office is currently closed to walk-ins.

“We’re no strangers to pandemics affecting our people,” she says of the Native American community. She adds that many of the people she serves face added stress because their family members and friends, who could live on reservations in rural areas with inadequate access to health care, may be at even greater risk.

Haseya can connect Native Americans with other community resources, provide financial help, support healing from trauma, and even help people pack up their belongings and move to safety, Snowbird says.

“Anything that anyone needs from us, we try to fill in those voids,” she adds. “COVID hasn’t changed that.”

Meanwhile, advocates for children in danger of abuse or neglect say they’re worried about what might be happening behind closed doors. The El Paso County Department of Human Services recorded 1,728 calls reporting suspected child abuse or neglect in April 2019. This April, the department recorded just 1,103 calls, a 36 percent decrease.

“Case workers are still out in the field investigating” during the pandemic, Krow said. “Sometimes there’s a thought that maybe DHS is not open. That is absolutely incorrect.”

With mandatory reporters — such as doctors and teachers — not seeing their patients and students, it’s up to neighbors, family members and others in the community to pay attention to how the kids around them are being treated. DHS is preparing for a potential spike in reports, as restrictions on activity outside of the home begin to lift and kids may be in front of day care providers or others outside the household, says Jenkins of the county’s Children, Youth and Families Services.

“Children that are left unsupervised” could be a sign of neglect, she says, or “children that maybe have the appearance that they don’t have what they need.”

Anyone who gets a “gut feeling” that something is amiss shouldn’t hesitate to call the child abuse hotline, Jenkins adds. Each report is assessed by DHS; case workers will stop by a home or ask police to do a wellness check if the report meets the criteria defined in state statute for abuse and neglect.

“We still have staff knocking on doors and going in homes, so none of that has changed,” Jenkins says.

When financial resources are strained, the likelihood of abuse or neglect — as with domestic violence — can increase, says DHS spokesperson Kristina Iodice. Families in need can apply for benefits such as food stamps or child care assistance at colorado.gov/peak, or by visiting DHS’ office if they can’t apply online.

For at-risk adults, including people with physical and mental disabilities and seniors who receive at-home care, reports of abuse and neglect have also sharply declined over the past several weeks, says Bidwell of El Paso County DHS.

“I think since about mid-to-late March we’ve seen about a 50 percent drop,” he says.

Like Jenkins, Bidwell fears that this is because the people who would normally see these at-risk adults, such as doctors and community providers, aren’t able to observe them directly.

For at-risk adults, neglect can occur when a caregiver isn’t making sure someone is taking their medication or eating enough. Self-neglect — for an at-risk adult who may live alone but hasn’t been eating, for example — is another concern. A third category of reports encompasses financial exploitation, when a family member, caregiver or acquaintance might trick an at-risk adult into handing over money or prevent them from accessing their bank account, Bidwell says.

He asks community members to watch for signs of abuse or neglect, and make a report to DHS or to police when something seems wrong. That could mean if a neighbor seems unclean or malnourished, or even if you haven’t seen them outside when they normally take regular walks, Bidwell says.

While an observation like that may not seem like much to go on, someone else who notices something and makes a report — say, a grocery store clerk who realizes one of their regular customers hasn’t been to the store in weeks — could be enough for DHS or law enforcement to take action, he says.

When workers receive “information from multiple individuals in the community about the same person, it starts to paint a larger picture,” Bidwell says.

The experts agree: Now more than ever, it’s important to reach out to potentially vulnerable friends, neighbors and family members.

“What I would ask for [the] community to do too is to be checking in regularly with your friends, your family, your co-workers — a call, a text, a chat,” Markley says. “That’s what we should be doing just in general with anyone we know.

“If you do feel like you have a friend, family member, co-worker that’s in need, you can call the Safe Line for them, you can direct them to the Safe Line or, if it’s a very serious situation, absolutely engage law enforcement.”

Voces Unidas for Justice, which offers cultural and linguistic services for Latinos: 720-588-8219.

If you or someone you know is in immediate danger, always call or text 9-1-1.

The Indy’s online version of this story includes new numbers from the district attorney’s office, which were not available in time for the print version.