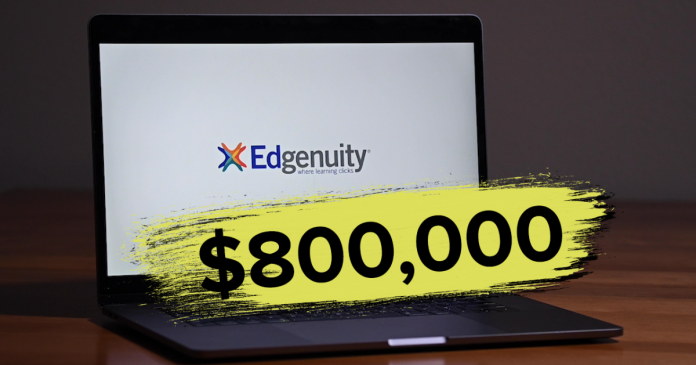 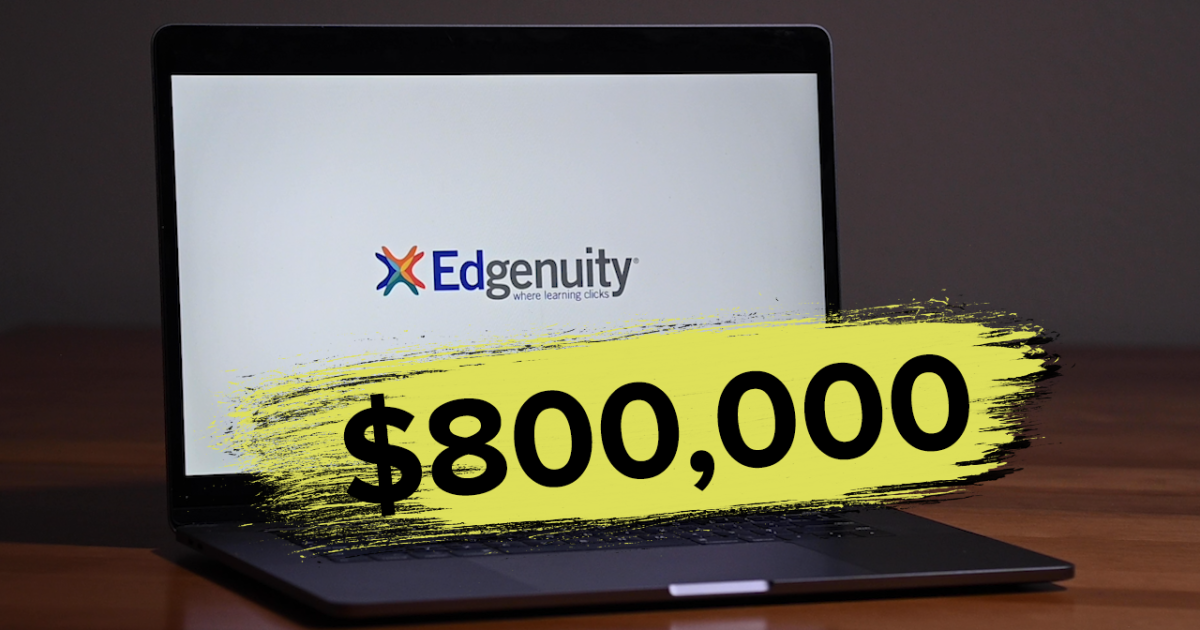 “There’s a lot of students in elementary school and we paid for that platform,” said Katherine Dorman, an e-learning teacher in the district.

The Douglas County School District signed a contract with Edgenuity last summer for the company to take over its online learning and provide curriculum for more than 6,000 students in grades K-12 who signed up for 100% remote learning in the fall semester.

Douglas County e-learning teachers oversee the platform, but students have very little live interaction with them. Instead, students work their way through virtual warm-ups, instructions, summaries, assignments, and quizzes.

Videos are shown in some curriculum courses but are pre-recorded using Edgenuity teachers — not Douglas County educators.

This year marks Dorman’s 37th year teaching science for Ponderosa High School. She questions why the district chose to outsource learning to a private company and for such a high cost.

How the deal happened

The public first learned about the Edgenuity deal at an Aug. 4 school board meeting just days before teachers were scheduled to go back to work.

Marlena Gross-Taylor, the district’s former Chief Academic Officer, is the one who signed on the dotted line.

“None of the funding for this program will be coming out of our general fund,” she said to the board back in August.

The $800,000 for Edgenuity came from federal CARES Act and ESSER Covid relief funds, which means taxpayers still paid for it.

The deal was rushed through with a no bid-process because of the pandemic and the scramble to get kids back to school. Records from the contract show the district justified the expense as an emergency purchase.

Fast forward to mid-August, and with the clock ticking for the start of school.

Kallie Leyba, president of the Douglas County Federation, said the rollout of Edgenuity was nothing short of chaos.

“[There were] people who didn’t have logins up until the last minute,” Leyba said.

Leyba is the head of the teacher’s union in Douglas County, and while the organization no longer has a formal relationship with the district when it comes to negotiating pay or working conditions, it still advocates for and supports teachers.

“I have a friend who her grandchild had four teachers in a period of about five days,” she said.

The issues with Edgenuity’s rollout forced the district to delay online learning until the end of August.

“We had one week to figure it out and we self-taught ourselves,” Dorman explained.

Emails obtained by Denver7 Investigates show parents, teachers, and even board members had serious concerns about Edgenuity.

A third-grade teacher wrote in an email to the district, “We are only ONE week away from starting with students, and teachers do not even have access to the main resource for e-learning.”

A parent wrote, “This is not what I signed up for when we chose the remote option. I’m feeling very much like a bait-and-switch has occurred.”

“We ended up with a platform that has created great inequities for our students and some of it is just frankly being wasted,” Leyba said.

It’s now money wasted because elementary schools in the district stopped using Edgenuity shortly after the semester began, and there was no refund to the district.

“When resources are as limited as they are, that money could absolutely have been better spent,” Leyba said.

“Maybe that CARES Act money could have gone towards not having furlough days for teachers,” Dorman said.

Dorman said instead of paying a private company to outsource learning, e-learning teachers could have created their own curriculum and taught it virtually. Hybrid teachers were already doing that once school moved back to full remote late last year.

“I think I could have developed online courses,” she said.

“There was no due diligence done. Teachers didn’t have a say in this,” Leyba said.

Other districts, like Cherry Creek, chose not to outsource their online learning to a private company. Instead, Cherry Creek Schools used CARES Act funds to pay existing teachers extra money to get its own platform up and running.

Douglas County isn’t the only school with Edgenuity problems

Tennessee parents protested the all virtual platform in Williamson County Schools. They held up signs that read, “Edgenuity doesn’t give education! Not useful, intelligent teachers … why did you lie?!”

Fort Worth, Texas scrapped Edgenuity altogether to give teachers more control over curriculum.

In Auburn, Alabama, the former Speaker of the House was recently convicted for accepting a more than $200,000 payout from Edgenuity.

Teachers question previous administration who signed off on deal

“There were two people who are no longer with us who made that decision and it didn’t seem very transparent,” said Leyba, with the Douglas County Federation.

“I think they abandoned ship and I feel that it’s very unfair to those who were left behind to implement those decisions,” Dorman said.

Denver7 Investigates wanted to ask Douglas County Schools Interim Superintendent Corey Wise what he plans to do about the platform and e-learning moving forward, but the district declined our request for an interview.

A spokeswoman noted that administrators who are no longer with the district signed off on the contract. And while that is true, Denver7 Investigates found Wise was no stranger to the Edgenuity deal.

“The one thing Edgenuity does provide is a more comprehensive piece,” Wise said to the school board during the meeting back in August when the public first became aware of the Edgenuity deal.

“You know, you can’t help but wonder — did somebody, did anybody benefit?” Dorman questions.

In a lengthy statement, the school district said, “Edgenuity provided more value for the cost.”

They also acknowledged “there were technical issues, integration issues, difficulty accessing customer service and technical support, as well as concerns with grade-level content not matching with what was originally guaranteed.”

The district said it is still trying to determine whether to extend its contract with Edgenuity for another year.

“Last spring, DCSD started the process of building an eLearning option for the 2020-2021 school year. We researched various platforms and narrowed the list down to two options, with Edgenuity providing more value for the cost. For example, Edgenuity includes access to student electives, student specials and teacher professional development, at no additional cost. We entered into a one-year contract with Edgenuity on August 1, 2020.

The platform was intended to be utilized for our middle and high school students, as Edgenuity provided a limited number of elementary licenses (1,000) and we would have needed to pay for additional elementary licenses on a per-student basis. Once the school year began, it became clear that Edgenuity is better suited for middle and high school learners, so it was discontinued at the elementary level. eLearning teachers are currently using resources from their home schools and district curriculum resources such as Envision Math, Ready Classroom Mathematics, RAZ Kids Plus and Discovery Experience to support our elementary students. Further, there were technical issues, integration issues, difficulty accessing customer service and technical support, as well as concerns with grade-level content not matching up with what was originally guaranteed by Edgenuity.

With 3,381 DCSD students enrolled in eLearning, we want to provide the best possible learning platform available, while also being good stewards of taxpayer dollars. The cost for Edgenuity this year is $800,000 and was paid for through the CARES Coronavirus Relief Fund and ESSER Funds. No general fund dollars were used.