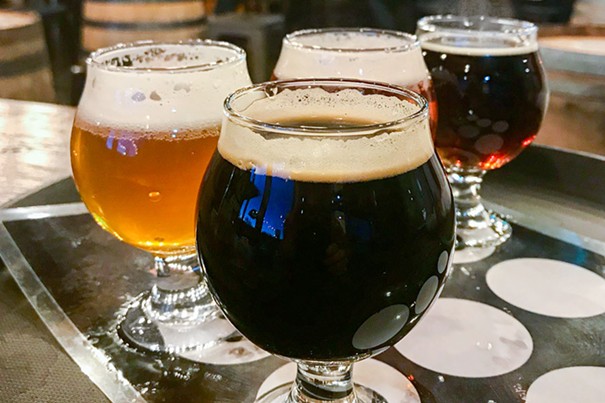 The team of veterans behind Dueces Wild Brewery quickly swooped in to capitalize on 1876 Ale Works’ very short existence at this location, creating a satellite taproom for their Peterson Road hub. No brewing happens here, and 10 taps largely reflect Dueces’ flagship lineup. (Their beer amplification doesn’t appear to be leading to further experimentation.)

We go for two, four-beer samplers — joylessly presented atop a laminated sheet on a round server’s tray, yawn — for $8 each. We ensure that this year’s Great American Beer Festival gold-medal-winning Knuckle Dragger Scotch Ale makes the cut; indeed it typifies the style with perfect harmony and a little lingering sweetness. In fact all our beers, save a couple, stay safe and true to style.

The textbook Hefeweizen and roasty, coffee-essence stout are as pure in form as the fruity, yeast-dominated Belgian. The only way to know you aren’t drinking the stable flagships of so many other breweries is when Dueces makes a couple stylish departures with its Nanner Amber Wheat and Blood Orange Pale Ale. The former dances between a Belgian and Hefe, with evocative banana notes accented by subtle nutmeg and ginger essence.