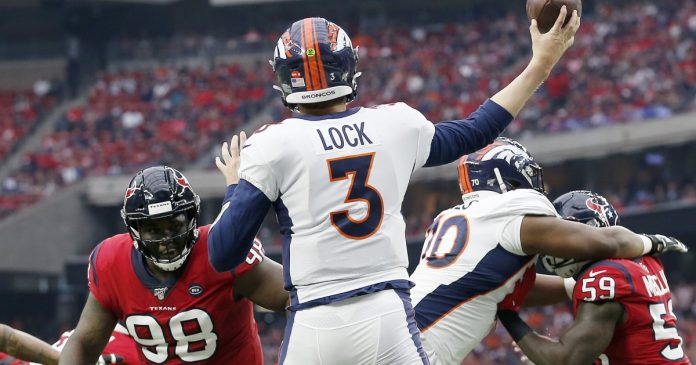 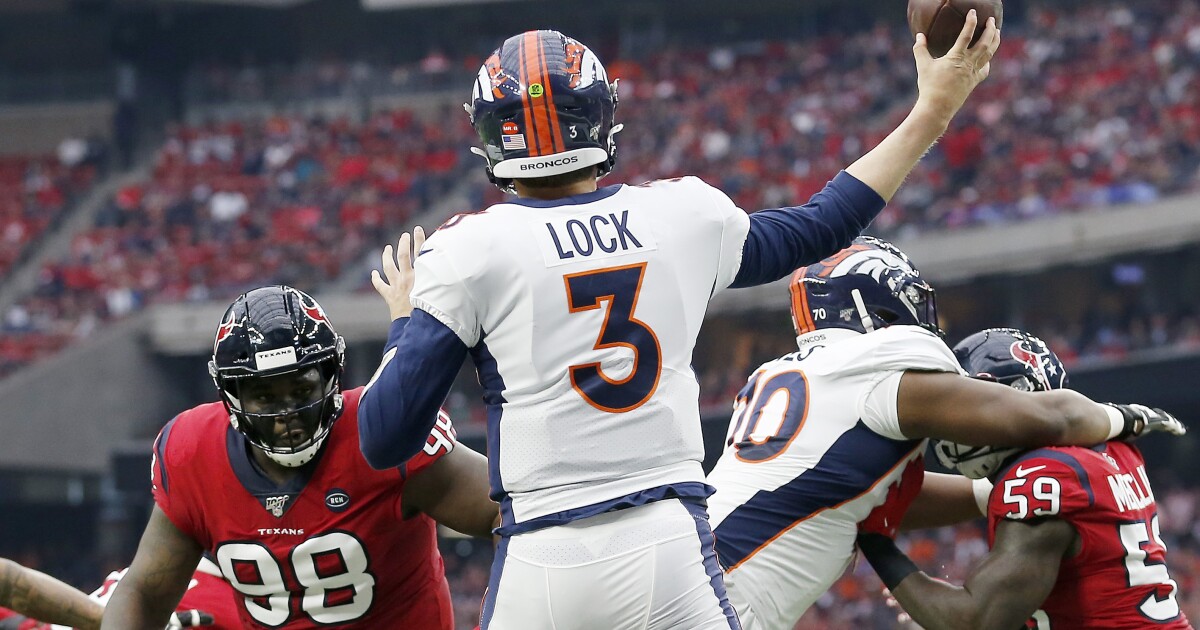 ENGLEWOOD, Colo. — Drew Lock approaches football with childlike enthusiasm. Watching him sling the ball around, it feels like he’s in the cul de sac playing until darkness falls or the ball gets stuck in a tree. With Lock in the cockpit the past two weeks, something interesting happened. Joy returned. At practice and in the games.

When Lock began calling plays from his wristband during his first few days as a starter, good friend Dalton Risner called him Buzz Lightyear. After his victorious debut against the Chargers, center Connor McGovern, who played briefly with Lock at Missouri, suggested he celebrate like Buzz after touchdowns. Lock was down with the idea. So it was, Buzz Lockyear was born — throwing lasers and shooting them after scores. There were three on Sunday, and five in two games.

It’s not that the Broncos are winning. It’s how. The Broncos have teeth again. They are smiling. Football is fun again. Of course, there will be moments when the toy’s batteries go dead. And days when Buzz gets a busy signal when he calls Star Command, otherwise known as offensive coach Rich Scangarello. But, he’s reveling in the moment and with his teammates.

“As a team, we have to keep stuff light like that,” McGovern said. “As a team you can see the lighter we keep it, the better we do. Rich called an amazing game. When you are moving the ball like that, it carries over and everyone has fun. Rich has really been implementing that lately, showing funny videos during meetings because we were getting so frustrated. We know how much talent have, and we were getting so close. Rich has made it fun, and that goes along with the whole Buzz Lightyear thing.”

Lock will look to make history Sunday in his return to Kansas City, where he grew up and his family owns several Summit Grill restaurants. Lock aims to become the first Broncos rookie to win his first three starts. Marlin Briscoe won his first two in 1968, completing 16 of 40 passes for 372 yards, four touchdowns and two interceptions. Briscoe fired three scores in his third start, but the Broncos were smoked 47-23 by the San Diego Chargers.

Craig Penrose triumphed in his first three, but won two games in 1976 and his third in 1978 when he was no longer a rookie. In his rookie wins, Penrose completed 12 of 30 passes for 185 yards, two touchdowns and three interceptions. John Elway, too, won his first two starts, but went 10-for-29 for 120 yards with one pick and seven sacks.

In contrast, Lock has put on a breathtaking show. He is 40-for-55 for 443 yards, five touchdowns and two interceptions. He is the first rookie ever to throw for at least 300 yards and three touchdown passes in his first road start. Quarterbacks make their money on third down and in the red zone. The Broncos ranked among the league’s worst before Lock. With him? They have converted 12 of 23 third downs and are 5-for-7 in the red zone.

“He was completing some passes,” said Vic Fangio in his matter-of-fact manner. “I don’t put ceilings or floors on guys. They can go as high as they want, and hopefully not too low. I think he played much better yesterday than the week before. I thought his passing was more accurate and crisp. And he made some plays with his legs, which was good. He’s progressing the way we had hoped so I feel good about that.”

Truth is, Lock has exceeded expectations. Nowhere in the Broncos’ calibrations did they expect Lock to deliver the way he did Sunday. He had the talent, but no one could have predicted that light show with a straight face. The hard part for Lock is no different than any young quarterback. There is more film on him now. He’s likely to see more zone coverage since he has carved up man coverage in his two games. And he will be the homecoming king this week.

“That gives you guys something to write about and talk about,” Fango said.

Eventually, yes. These days we are talking about their quarterback as a super hero, even if it comes with tongue in cheek.

“Sometimes something silly can be a rallying cry for some people,” Fangio said. “But then when you have not such a good performance then I’m sure Buzz Lightyear – what’s his name,Buzz? – will be made fun of. Everything has its shelf life.”

Footnotes
Broncos Von Miller was OK after the game, one in which he played at around 80 percent. The hope is that he will start again Sunday. … Noah Fant (bruised foot/hip irritation) is undergoing tests on his injuries, but remains questionable. … Right tackle Ja’Wuan James left Sunday’s game with no issues with his left knee after playing the first half. The plan is to increase his play count this week. He played 31 snaps Sunday. He had logged 32 for the season prior to Sunday.