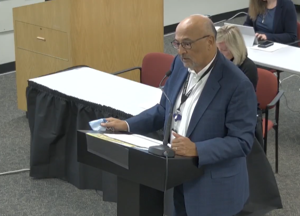 The El Paso County Board of Health met Wednesday to discuss the rising fentanyl crisis in the community and the downscaling of the county’s response to COVID-19.

Accidental fentanyl overdoses killed 102 people within El Paso County in 2021 compared to five years ago, when four died, according to data from the El Paso County Coroner’s Office.

The rise in fentanyl deaths is attributed to various factors, including its prevalence in other types of street drugs, Dr. Chris Urbina, the county’s medical director, said. One in 4 street drugs is laced with fentanyl, he said.

“I thought, ‘No, how is this possible?'” Urbina said. “But this is the reality.”

Among those lost in El Paso County last year were two brothers in Monument and a Mitchell High School student.

Fentanyl is 50 to 100 times more potent than morphine and as little as 2 milligrams can kill, an amount thousands of times smaller than a teaspoon of sugar.  Urbina emphasized that test strips people often use to detect fentanyl within other street drugs can often miss detecting such minuscule amounts.

Fentanyl distribution is lucrative, and it’s an easy drug for dealers to sell, Urbina said.

“It’s cheap,” Urbina said. “It creates a greater amount of dependence and addiction so you’re creating new users who use it.”

Pikes Peak Crime Stoppers is offering a $1,000 reward for anyone that distributes fentanyl in any quantity. And  lawmakers are working to finish a bill designed to combat the state’s growing crisis without reversing a 2019 law blamed for worsening the fentanyl crisis.

The Board of Health also discussed solutions to the crisis during the meeting including education, treatment and Narcan distribution.

Board member Dr. Richard Vu noted that while availability of Narcan, a medication that can reverse the effects of an opioid overdose, can help in emergencies, it will not be a fully effective tool without public education, further support and treatment.

“It really has to involve all of us,” Urbina said. He stressed that Narcan is a short-term fix to a long-term problem.

El Paso County saw zero COVID-related hospitalizations and deaths over the past 14 days, according to county data.

“We want people to have a medical home and be able to go see their medical provider or community health clinic and get their vaccinations and testing,” said Susan Wheelan, El Paso County Public Health director. “So we are going to be in that process for some time to scale down and to adjust prior to where we were with COVID.”