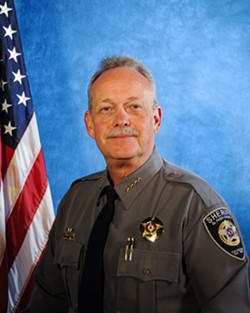 The El Paso County Sheriff’s Office has lost 379 officers since Sheriff Bill Elder took over on Dec. 31, 2014. That equates to 71 percent of its current authorized strength for sworn officers.

While attrition rates edged upward during the last six years of former Sheriff Terry Maketa’s 12 years in office, those rates have exploded on Elder’s watch.

This is noteworthy because any hiring process can be expensive and tedious, but especially in law enforcement, where job candidates must undergo background checks and complete months of training.

While Elder himself didn’t comment on the turnover, his spokesperson Jackie Kirby explains the departures in an email by pointing to national trends. Law enforcement agencies across the country have struggled to hire and retain officers due to a variety of issues, ranging from a healthier economy offering other job alternatives to “a looming retirement bubble” due to an aging force.

The Marshall Project, a nonprofit journalism agency that reports on criminal justice issues, reported earlier this year the nation lost more than 23,000 officers from 2013 to 2016, according to the U.S. Justice Department. Two-thirds of 397 agencies reported in a December 2018 survey that they’ve seen a drop in applicants in the last five years.

At the Colorado Springs Police Department, attrition also has inched upward, from 5.6 percent in 2012 to 8.9 percent in 2018. But this year, the rate fell to 5.7 percent through mid-November. Since 2015, the CSPD has lost 258 officers, which equates to 35 percent of its currently authorized 743 sworn officers.

But the Sheriff’s Office’s departures outpace that, prompting Elder to take new steps to recruit and retain officers, including relaxing previous standards on tattoos, facial hair and past marijuana use.

It’s unclear if that will be enough to attract young officers into a field that’s not only dangerous but under intense scrutiny by the public.

“This is a very dangerous profession, and we know it’s not for everyone,” says Kirby.

As Maketa resigned amid various allegations of wrongdoing (two juries subsequently failed to convict) in late 2014, the departure of sworn officers had shown an uptick. From 2009 through 2014, the department lost 169 officers to resignation, retirement and terminations, and attrition edged upward from 5.5 percent in 2009 to 7.4 percent in 2014, according to Sheriff’s Office data.

But during the Elder years, the department has seen double-digit percentage attrition rates, peaking in 2017 at 18.6 percent, based on an authorized strength of 533 sworn officers, more than during the Maketa years. Those losses from resignation, retirement, termination and death total 379 officers.

However, attrition dropped to 9.4 percent this year, through mid-November, with the department losing only 50 in 2019, suggesting steps Elder has taken might be yielding results.

A closer look shows that:

Civilian turnover numbers at the CSPD weren’t readily available, but the city department also has an attrition problem. From 2015 through mid-November 2019, 258 sworn officers left. (Authorized strength increased from 668 to 743 during that time.)

The highest attrition rate came in 2018 at 8.9 percent when 62 officers left through resignations, retirements or terminations. The departure rate means it’s difficult for the CSPD to make headway through its training academies at a time when the city hopes to add 120 officers over a four-year period.

“Anecdotally,” says CSPD spokesperson Lt. Jim Sokolik, “about 50 percent of our attrition every year is from retirements. There is no consistent reason for the rest of the attrition.” Reasons range from not completing the academy to personal issues, he says.

For example, this year 19 officers retired and another 19 with less than five years on the job quit; of those early departures, seven “separated” while at the academy and eight left before finishing their probationary year.

CSPD recruiter Nick Ryland says in an email that the city’s attrition rate falls below those of comparable departments, in part because of the proximity of several military bases whose personnel form a pool of potential applicants.

Ryland says the department wants to attract people focused on public service above all else, which a shortened hiring process might undermine. “I feel that the longer hiring process can filter out the candidates that might be interested in law enforcement for the wrong reasons; such as it’s just a job, just having the authority, or for lack of other options,” he says.

No data was available for how much crossover takes place between the two departments, but pay rates are similar. CSPD recruits earn $54,996 a year while in training, and $60,432 when sworn in. Sheriff’s Office recruits are paid $56,106 and get a bump to $62,320 when they become deputies.

Attrition has robbed many departments across the country of personnel, according to the Police Executive Research Forum (PERF), which conducted a study in 2018 and 2019 about why agencies are losing officers.

“A major concern is whether today’s recruits have the skills sets and temperament to meet the challenges of policing today,” PERF reports.

Unlike policing of 40 years ago, today’s officers must be fluent in technology and equipped to handle a litany of social problems, ranging from opioid addiction, the mentally ill and the homeless.

“Police agencies need a more diverse set of officers who possess key skills such as interpersonal communications, problem-solving, basic technological expertise, critical thinking, empathy, and ‘community-mindedness,’ along with the traditional law enforcement skills required of all officers,” the report says.

PERF made the following recommendations:

• Emphasize service over excitement. Agencies shouldn’t emphasize excitement, like breaking down doors, rappelling off buildings and firing high-powered weapons. Rather, departments should portray policing as service-oriented.
• Streamline the application and hiring process. Young people aren’t very patient in awaiting a months-long hiring process prolonged by background checks and entrance exams. Agencies should speed up those procedures while still being thorough.
• Reach out to potential candidates. Rather than simply announcing a test date, agencies should establish relationships with universities and other sources for recruits, and focus on helping candidates “see themselves” in the agencies by assuring that female and minority officers play a role in recruitment.
• Revamp incentives to appeal to young people. Today, officers are more interested in assignment diversity, learning new skills and flexible schedules, for example, than merely the paycheck.
• Realize not everyone will spend a career in policing. “Many agencies have already begun to ‘civilianize’ functions that do not require a sworn police officer,” the study said.

In response to the mass exodus, the Sheriff’s Office has taken a number of steps.

In 2015, Elder’s first year in office, he created a recruiting sergeant position and assigned staff with the ancillary assignment of attending job fairs statewide and visiting community colleges and military installations, Kirby says.

The office has used signing bonuses, but no longer does, and promotes recruitment through social media, she says.

Elder also ramped up the application process by assigning more investigators to conduct background checks of applicants; in addition, the department initiated shorter training spans. In mid-2018, Elder announced he’d curtail the normal 22-week academy by half to pump out officers to work in the Criminal Justice Center but who don’t receive Peace Officer Standards Training (POST) certification. (Other jails in the state do the same.)

As for the jail, it’s hard to keep people on the job when inmates lash out at jail guards, who aren’t armed and are charged with overseeing up to 80 inmates, or more, single-handedly.

“We know that the jail is a much less desirable place to work,” Kirby says, “and we are doing everything we can to lower our jail population and deal with the mental health issues to make it safer.”

Starting in 2016, Elder has allowed officers to wear facial hair and display visible tattoos while also modifying the ban against marijuana use from two years before hiring to one year before.

In recent weeks, the department budgeted for a 3 percent pay raise in 2020 for civilian employees and plans to increase pay for deputies from 6 percent to 11 percent, Kirby says, adding that the office is working on increasing advancement and transfer opportunities for court and transport, patrol and investigations deputies.

At the end of the day, though, law enforcement is a dangerous undertaking and a few tweaks to qualifications and job requirements can’t change that.

In 2018, Deputy Micah Flick was killed by a wanted felon, while CSPD Officer Cem Duzel was left with a serious brain injury in a shootout with a suspect. The National Law Enforcement Officers Memorial Fund reports that 1,550 officers have died in the line of duty since 2010.

“Being a first responder (Law Enforcement and Firefighters) are noble professions,” Kirby says in an email. “Every day they put on a uniform and go to work knowing it may be their last. These jobs are not for everyone, and sometimes after taking the position, some realize it is not for them.”