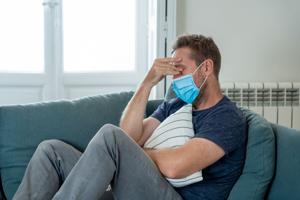 Concerns that COVID-19 would adversely affect mental health are being realized, data show.

Not only has the pandemic been difficult to navigate for people already dealing with mental illness, but new cases of mental impairment are growing, said Kirk Woundy, associate executive director of the Colorado Springs office of the National Alliance on Mental Illness.

While most of the phone calls to the local NAMI affiliate still involve cases of serious mental illness — and associated issues related to stable housing, the criminal justice system and finding a psychiatrist — a distinct shift has occurred in recent months, Woundy said.

Callers seeking assistance are reporting higher levels of stress and despondency due to the relentlessness of COVID.

“Even if you’ve made it through the pandemic OK so far, there’s a certain hopelessness that comes with seeing so many people and segments of the community suffer with health-related impacts, economic impacts or both,” Woundy said.

“It’s made worse by knowing that this wave probably won’t let up anytime soon.”

A recent Colorado Health Foundation survey found 53% of Coloradans are experiencing increased anxiety, loneliness and stress. Among the state’s lowest income families, the figure is 63%.

Colorado Crisis Services continues to field record numbers of calls and texts to the centralized crisis line — and they’ve been steadily increasing during the pandemic.

Compared to pre-COVID months of January and February, average monthly volume was up more than 33% from March through October, the Colorado Department of Human Services’ Office of Behavioral Health, which oversees crisis services, reported this week.

The crisis line exceeded 21,000 calls and texts during every month of the pandemic except April, reaching an all-time high of 24,843 contacts in October.

The ongoing pandemic, economic downturn and other challenges such as wildland fires and social unrest are cited as contributing factors.

Last year, one in five American adults and one in three young adults ages 18 to 25 identified as having a mental illness, according to the National Institute of Mental Health.

Adolescents and young adults who find themselves without a stable home environment are particularly vulnerable.

Three in four homeless youths in Colorado Springs say that mental illness contributed to how they became homeless, and their mental problems are triggered or spiking due to the stress, trauma and violence they witness once on the streets, said Shawna Kemppainen, executive director of The Place, the teen homeless shelter in El Paso County.

Also problematic are what Kemppainen calls “a huge gap” in Medicaid-funded substance-use programs and mental health treatment centers for youth beyond short-term periods.

The main difference between 2020 and past years is that more ongoing and more severe mental health issues are cropping up, Kemppainen said. In addition to a spike in the acuity of cases, the use of alcohol and drugs is increasing, she said.

But a project that started earlier this year in conjunction with Peak Vista Community Centers is providing instant and ongoing mental health care to homeless youth, Kemppainen said.

“We have always worked with a private therapist and local services such as AspenPointe to support youths’ mental health, but having immediate access in critical situations that are short of requiring emergency services has vastly improved the community’s ability to respond,” Kemppainen said.

Clinicians worked with 32 youth from July through September, Kemppainen said, oftentimes addressing an occurring crisis, then continuing to follow the teens and moving them into longer-term treatment.

“In one situation this summer, a suicidal young person in the shelter who wanted to leave and go back to the street instead was able to get into a local behavioral health center,” she said.

“Eventually, he got into The Place’s supportive housing units where he is gaining in stability, though still struggling.”

Isolation from friends and family is a big issue for people of all ages, NAMI’s Woundy said.

“Pandemic fatigue is real, and it’s weighing heavily on people as we enter the holiday season and long months of cold weather,” he said.

Good things have emerged from COVID, Woundy said, including the advent of telehealth appointments and virtual support groups, which have expanded services to rural communities that might have been constricted in the past.

“For instance, while we wish NAMI support groups could meet in person right now, going virtual has allowed many people — though not all — from outlying areas to easily drop in on a Tuesday or Wednesday night,” he said.

A difficult winter could be ahead, Woundy said. His organization encourages people to take the time to take care of themselves with the usual prescriptions of getting enough exercise, sleep, healthy eating, relaxing and whatever forms of social interaction they can.

In addition to NAMI, a new resilience training program, letstalkgrit.com, from the National Institute for Human Resilience at the University of Colorado at Colorado Springs, can help get through the days more easily.

“We hope that this shared experience has opened up more meaningful conversations about mental health, and reduced some of the stigma of mental health conditions along the way,” Woundy said. “Time will tell.”