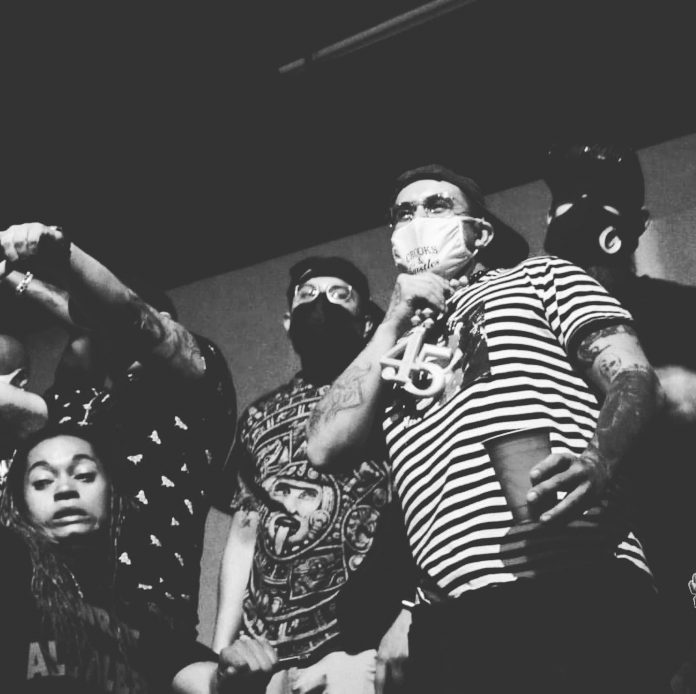 After suffering a head injury from a car crash in 2018, Adrian Garcia was forced to drop out of school. In a moment, his academic dreams were crushed along with his brand new car. A couple of hours after signing the paperwork for his new vehicle, someone T-boned Garcia, sending him to the hospital. Unable to retain any information due to a head injury, Garcia lost his scholarship, indefinitely putting a hold on his academic career. Although it seemed as if everything was falling apart for Garcia, it was at this definitive moment that his new life began to take form.

Unable to attend school, Garcia got involved with the local music scene. With the help of Paul Jr. and Nick Torres, Garcia began working with Mint Audio, a recording studio in Denver’s art district. He began promoting shows and connecting with local artists. At one point, he bought dozens of headphones and began throwing silent discos. Every decision he made was an effort to cultivate relationships with local artists. That communal spirit eventually became the cornerstone of Fam BAM Productions.

“Fam BAM stands for ‘Family Building a Movement,’” Garcia explained, “and that movement is to build community through music and art. We want to be sustainable — to be able to rely on each other instead of the institutions that bind us and to lift each other up. It takes a community, a strong community, to uplift the individual, and that’s the idea behind it.” 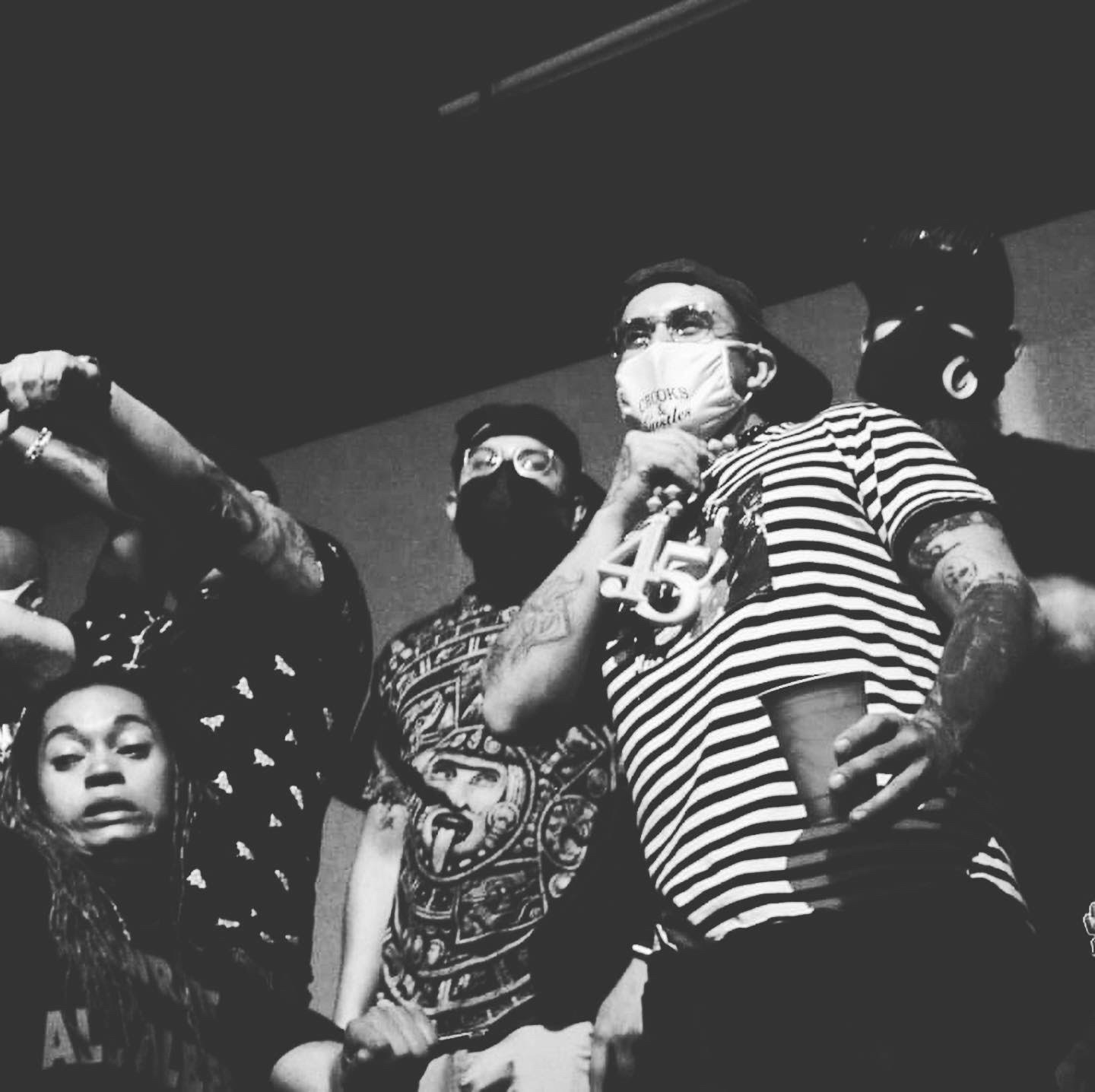 As more artists joined the Fam BAM team, Garcia began to recognize the challenges performers face when entering the industry. The multifaceted and complicated nature of the music business often scares artists away before they are given a viable chance to succeed.

“There’s a lot of people that want to be involved in the music industry, but they don’t know where to start. There are barriers to entry, there are gatekeepers, there are all of these cliques and things that are within the music industry. So for somebody just starting out, it’s difficult. How do I get a show? How do I book a venue? If I want to be involved in something, how do I do that? Besides just being a producer and making music and talking to my friends, you know?” 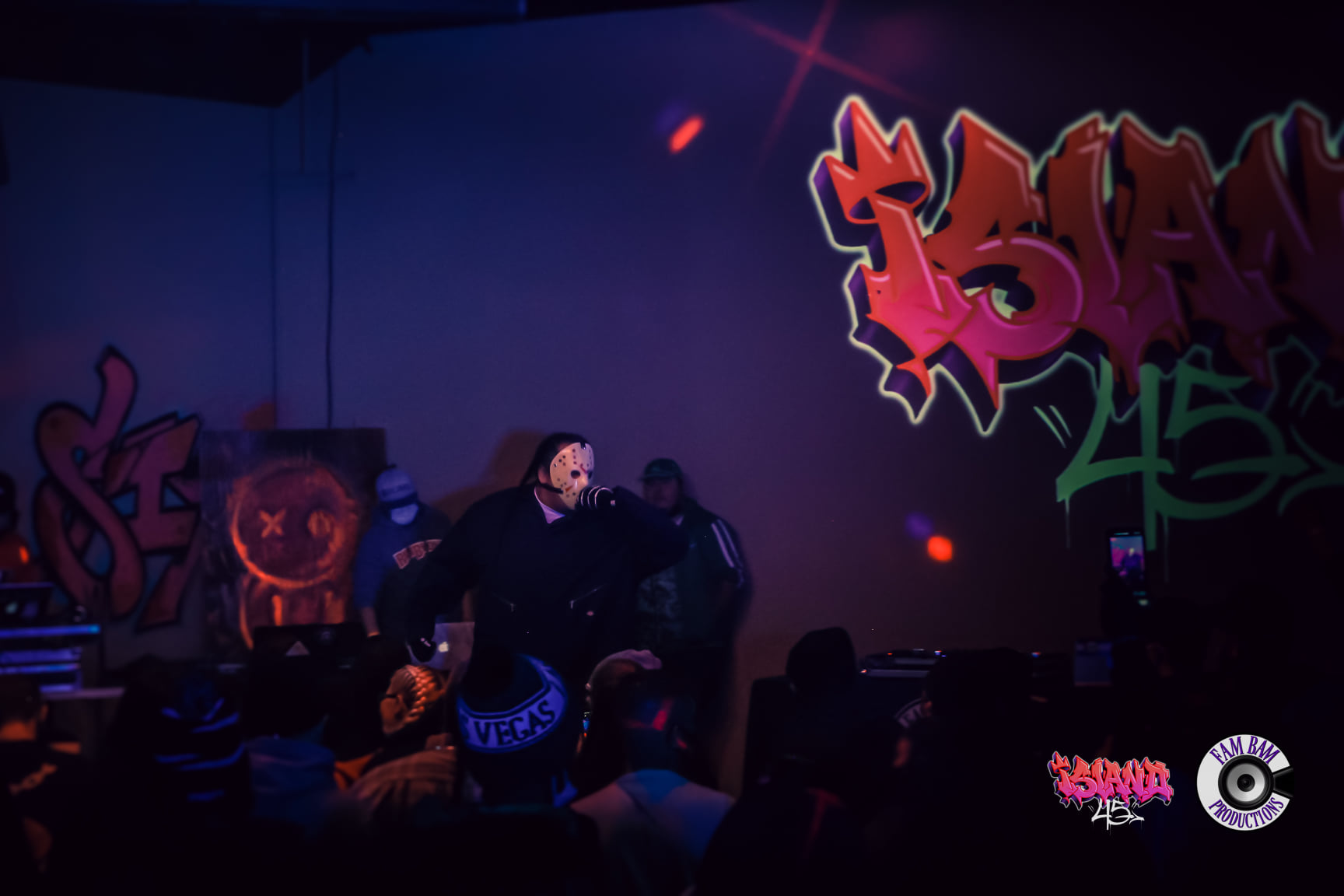 Tired of seeing raw talent washed up by the vicious tides of the music industry, Garcia created Fam BAM Productions to help up-and-coming artists navigate the complicated enterprise. “What we concentrate on is really helping [artists] realize that they are the business, they are the brand. They need to have more of a business acumen to carry themselves.” Sometimes, reaching a proper balance of art and business is a difficult process.

In the last two decades, live shows have proved increasingly useful in generating revenue for artists. According to Forbes, artists now generate upwards of 75% of their income from live performances, compared to just 30% in the ‘90s. Like any skill, practice makes perfect, and performing with a hairbrush mic in front of a mirror doesn’t count. Unfortunately, many venues are unwilling to take a financial risk by allowing new, unproven artists to perform. This makes booking shows for rising stars particularly difficult. That’s why, last September, Garcia and Fam Bam Productions launched the Island 45 venue.

“What we were doing was giving artists an opportunity to actually perform on a stage and get real stage time so they could master their art,” Garcia said about Island 45. The venue recently shut down over a zoning dispute between the property management company and the building department, but its unique and colorful atmosphere laid the groundwork for Fam BAM’s future business ventures. Geared towards the underground hip-hop scene, paying homage to the genesis of Hip-Hop, where rap battles were just one part of the live experience, in just six short months, Island 45 created a powerful legacy in Denver’s Hip-Hop community. 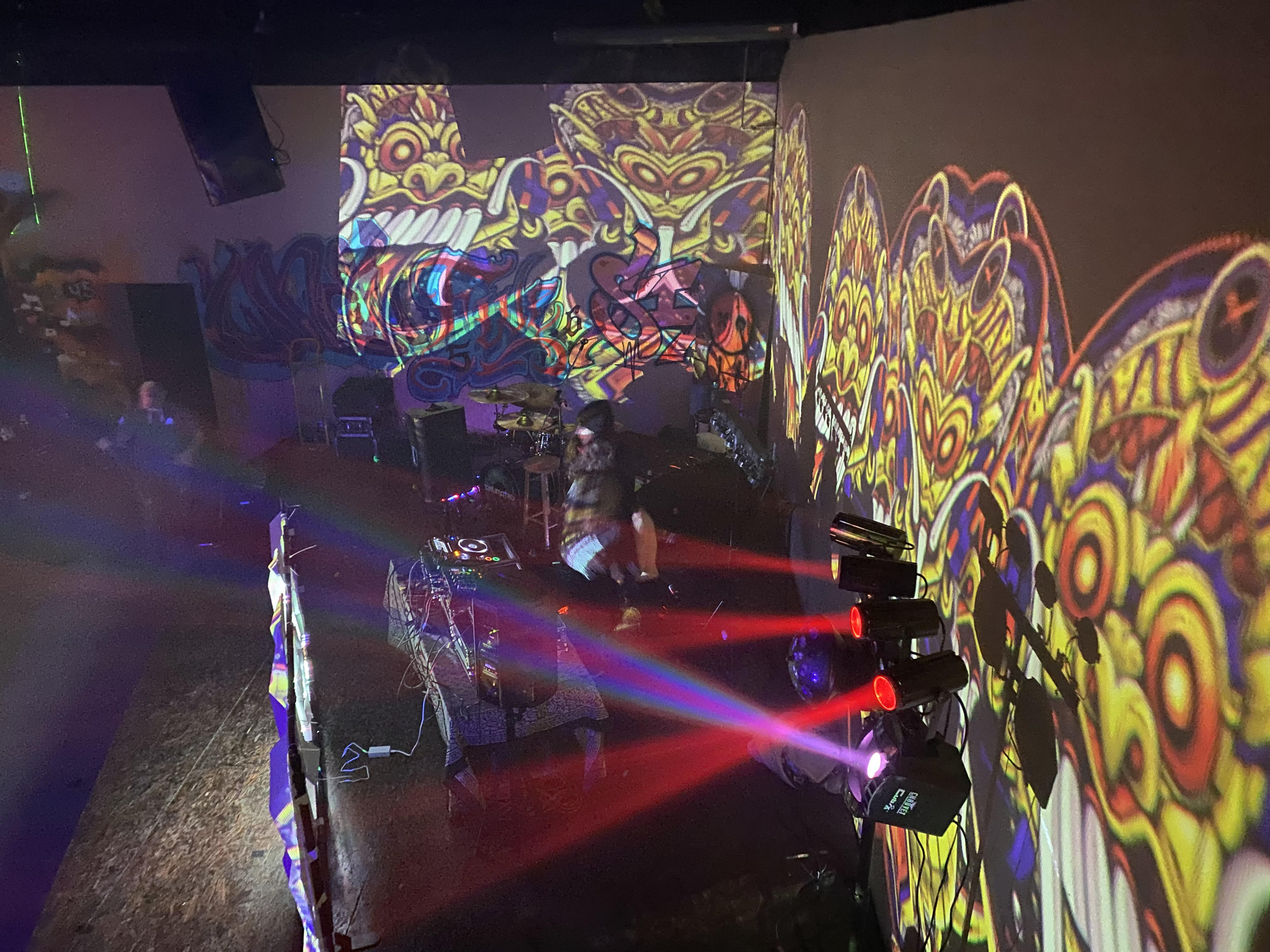 Inspired by early Hip-Hop parties in Brooklyn during the late ‘70s, the inside of Island 45 is covered in graffiti. Often created by the same people performing on stage, the graffiti was varied and authentic. Oftentimes, as a rap battle intensified on stage, local graffiti artists would tag the walls in their own unique style, creating an environment bursting with creativity.

For the short time, the venue was fully functioning, it provided an escape from the trials and tribulations of everyday life. At times, it even provided a second chance to people with complicated pasts.

“There were so many people that came up to me, one person in particular, like ‘I just got out of jail and I didn’t think that I could do certain things anymore, and this helped me and this saved me, thank you,’” Garcia said through a smile as he recounted the interaction. “Hearing that it’s like, hey man, maybe we are doing something that’s worth a damn. Maybe we’re helping people at the same time. And that’s why it was special to me because we care about the artists and we care about the promoters and we care about the people that come through here.”

Garcia’s dedication to his community extends far beyond the artists. He utilized Island 45 to host youth basketball practices and baseball practices. He even hosted a viewing party for The Black Panthers: Vanguard for a Revolution to celebrate Black History month and educate the local community. Largely inspired by KRS-One’s “edutainment” business model, Garcia believes in utilizing his position to encourage his community, as well as entertain. 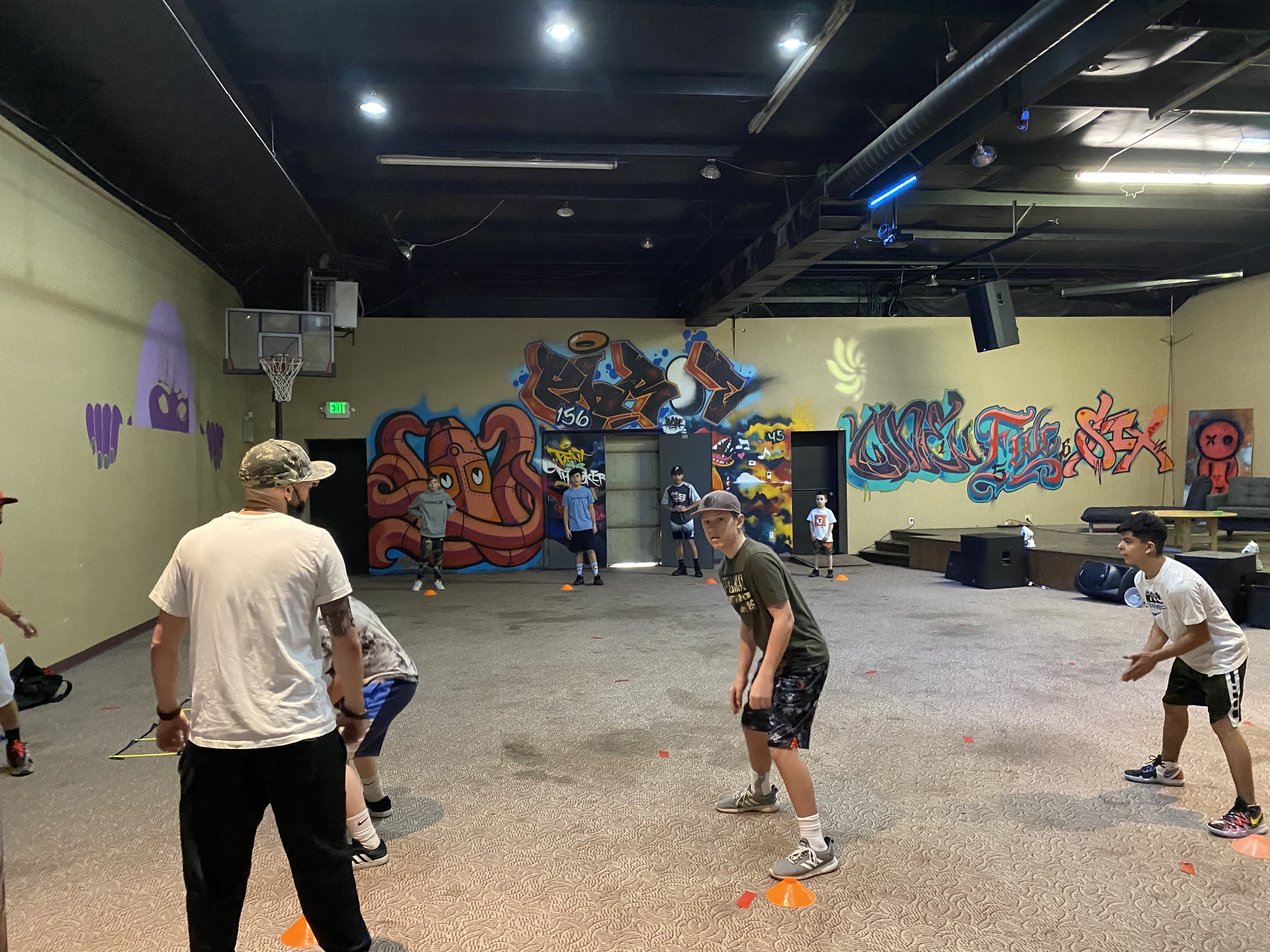 For Garcia, music provides a unique opportunity to give back to his community. “[Music] breaks down barriers. It allows people to communicate in different ways and brings people together.” This idea is the driving force behind Fam BAM’s community outreach efforts. People have started to take notice of their altruism, including the City of Aurora, who recently granted Fam BAM the “Everyday Hero Award” for their work with the Aurora Mobile Food Pantry. In their latest charitable effort, Fam BAM will be hosting a shoe drive in May for less fortunate youth, where music and art will remain at the forefront of the event. 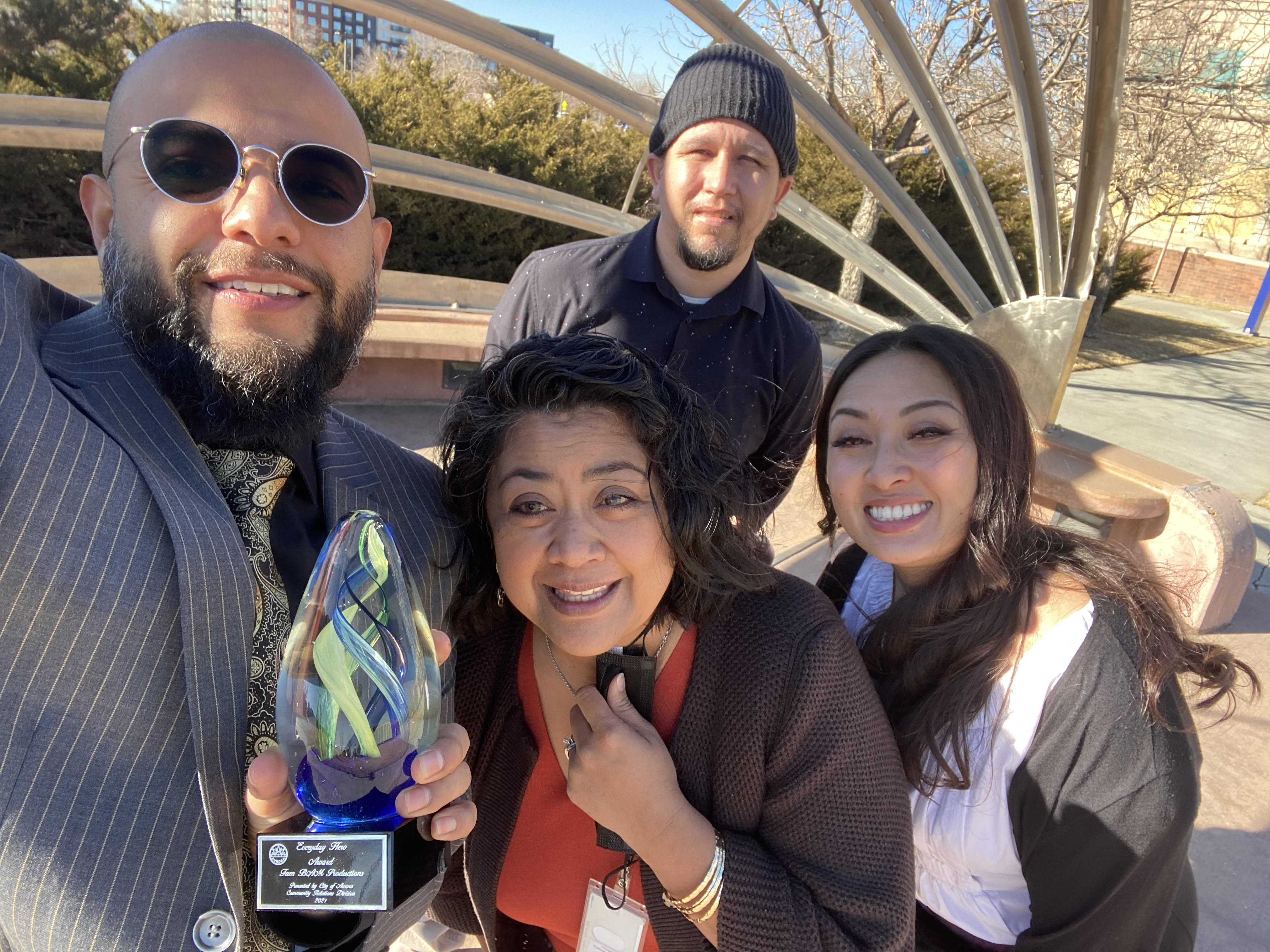 As Garcia plans for the Fam BAM shoe drive, he reflects on this particularly challenging past year, and the impact COVID has had on his community.

“There’s a little bit of soul searching that happens when something like this occurs. It’s not the first time that it’s happened and it’s not gonna be the last. Adversity is put in front of us on a daily basis… but we just keep it moving. We pivot, and we just keep it moving. We keep interacting, we keep networking, we keep building community. We keep working because there’s a lot of work to be done outside the music stuff. The music stuff is awesome. Being able to utilize that to have a positive impact on your community, that’s where it’s at, and that’s what we’re going to continue to do.”

Garcia is currently looking for another venue to partner with that shares a similar vision, preparing new artists for the music business by giving them a safe place to perform and master their craft. He ensures us that the Fam BAM family extends beyond their permanent staff, and encourages people to reach out.