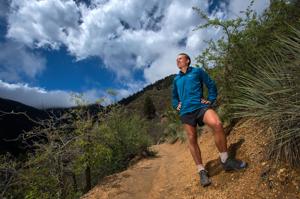 “I’ve loved and still love my time at Barr Camp,” he wrote. “Part of me feels like I could stay forever. I can picture it in my mind, me 50 years from now, a grizzled mountain man sitting on the front porch …”

He’ll leave the camp to his current resident partners who are part of a longstanding tradition on America’s Mountain. For four decades, good Samaritans and mainstream-escaping characters have stationed themselves at the log cabin, greeting weary travelers, booking campsites, preparing pancakes and spaghetti and occasionally embarking into the dark woods for lost souls.

“I’ve got stories of bears, moose, elk, bushy-tailed rats, spotted skunks, pygmy owls,” Miller wrote. “I have tales of late-night rescue missions, ice battles with the creek to keep water running to the cabin in the winter, after-hours door-knockers, forest-fire scares, and end-of-season poop scoopin’ in the compost toilet.”

The stories could go on, starting with when he began caretaking alongside his sister, Ashley, in 2015.

The two came from Pennsylvania, where Miller grew to love soccer. Later, he won his first long-distance race as an unknown and became, as The Guardian once put it, “something of a cult figure in the world of ultrarunning.”

From afar, Miller has been admired as the Nike-sponsored athlete living high on a mountain. Now he sounds ready to come back down.

In his blog, he wrote of Ashley and Nathan, her husband who also lived at Barr Camp, the two of them now back in Pennsylvania with their infant son. Ashley felt anxiety heading into the new year, Miller wrote, feeling “it’s easier to fear the unknown than to hope.”

“I will remember Ashley’s words: ‘But what if it’s good?'” Miller wrote.