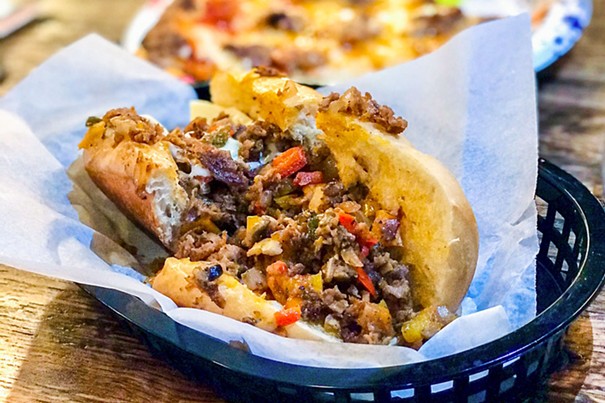 We catch Sebastino’s, named in memory of one of owner Leonardo Berlen’s sons, at its now-regular location at Dueces Wild Brewery’s Templeton Gap tasting room. (He does a weekly shift at Dueces’ original location too, having launched in July.)

The charming Berlen introduces us to his other son, Giuseppe, who’s assisting on the truck, and mentions his four daughters as well, plus California eateries he ran between 1985 and 2010. His cred established, we opt for a $4 slice of sausage pizza and a $9 loaded Philly steak sandwich.

The fine slice, cooked from Caputo 00 flour dough on stone in a deck oven on-truck, sports a nice, soft chew and lightly browned crust under a thick layer of oily cheese. It pops with acidic Stanislaus tomatoes sauce and zesty sausage pieces he buys out of Chicago.

Perfectly spongy bread kicks off the symphony of flavor that is the exemplary Philly — piquant and peppery with a bite of jalapeño heat tamed a touch by the gooey cheese. We’re totally impressed.