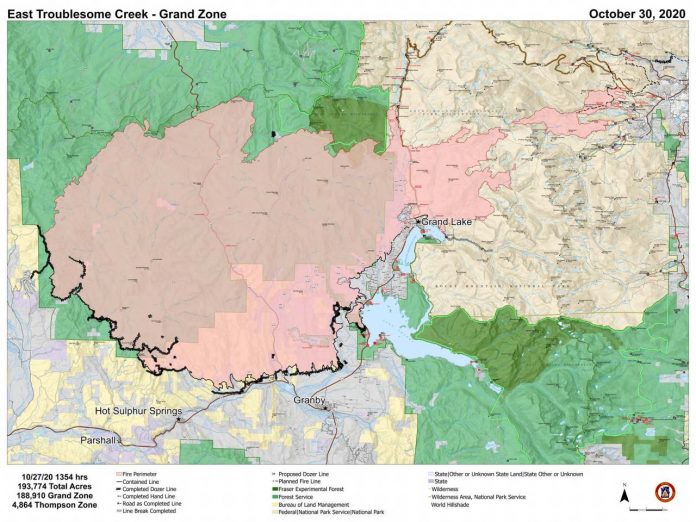 GRAND COUNTY, Colo. — As snow continues melting slowly around the East Troublesome Fire, soaking fuels and keeping the fire from spreading, crews are focused on identifying hot spots around its southern edge. Precipitation isn’t expected in the area again until next weekend.

Friday’s focus is similar to the past few days: Crews will continue to check for hot spots on the eastern flank between Granby and Grand Lake, and mop up efforts around structures, said Pacific Northwest Team 3 Incident Commander Noel Livingston.

Crews made good progress on Thursday on the East Inlet Trail, which runs from Grand Lake up to the Continental Divide, where there are natural barriers. They finished preparing the trail to act as a containment line in case future fire reaches that area, Livingston said.

There hasn’t been any fire concerns on the western or northern flanks of the fire.

The center of the fire burned “extremely hot,” meaning there’s very little, if any, residual heat left there, he said.

Most of the heat will remain in boggy areas, Livingston said, where there is fuel buried beneath the soil.

The snow is continuing to melt slowly, which is “perfect” for firefighters, he said. They’re expecting more of the same on Friday. He said they’re not expecting strong winds or extremely cold weather in the next few days. The next precipitation isn’t forecasted for about another week.

Dan Quinones, PNW Team 3 Incident Commander Trainee, said Thursday they they do not anticipate any fire growth that would be of concern for several weeks, and potentially longer.

Fire officials said firefighters will work along Highway 34 and Highway 40 focusing on mopping up areas. Firefighters are still responding to hot spots around Highway 125.

Livingston said managers are continuing to downsize around the fire.

“We’re now at our organizational size that we’ll see through the weekend into next week, which is about 110 or so firefighters that the team will be overseeing,” he said. “That’s engines and hand crews.”

Here’s the view from inside one of the newly reopened neighborhoods. We’re told this field and hillside used to be completely covered in trees and vegetation, now charred and ash on top of snow. You can also see how close flames came to homes here @DenverChannel pic.twitter.com/IEgwKagEDv

Over the past few days, many evacuation orders have been downgraded.

Click here for an interactive evacuation map, which is also shown below.

READ MORE: How you can help victims of Colorado’s wildfires

Anybody with a home in the evacuation area is encouraged to fill out a property verification and notification form so officials can contact you about re-entry instructions and damage notifications.

The Forest Service said the closure of the Arapaho and Roosevelt National Forests will continue through the weekend.

Three of the largest wildfires in Colorado history occurred this year.

The East Troublesome Fire started Oct. 14 and its cause is under investigation.

Denver7 Gives has started a new fundraising campaign for victims of Colorado’s wildfires with all proceeds staying to help our local neighbors. See how you can donate here.