A string of unexplained lights was seen in the air above Horsetooth Reservoir on Wednesday evening, according to a Coloradoan reader tip and several unsubstantiated accounts on Facebook and Next Door.

Claims of the unusual lights come as Colorado’s drone mystery — which started in the state’s rural northeastern counties just before Christmas — enters its fifth week with few answers.

Fort Collins resident Nico Gowdy said he first spotted the unusual lights lingering over the city’s southwestern edge when he was getting off his bus around Drake and Taft Hill roads Wednesday evening between 7 and 7:30 p.m.

Gowdy was getting ready to walk home when he looked up toward the “A” — a giant letter “A” that CSU students repaint each fall in the Fort Collins foothills.

“And I just see this line of, like, aircrafts, I guess, in the sky,” Gowdy said Thursday.

Gowdy said he counted roughly 20 lights, which he claims were equidistant apart and moving in a uniform, straight line. They were traveling south to north and didn’t make any noise that Gowdy could hear, he said.

“They would get to a certain point and the lights would turn off,” Gowdy said. “I was just so flabbergasted. I didn’t know what it was, but I’d heard all about the drone stuff going on around Colorado.”

Fort Collins Police Services did not receive any reports of similar sightings on Wednesday, according to FCPS Detective Brandon Barnes.

The Larimer County Sheriff’s Office had not responded to the Coloradoan inquiry about the lights as of Friday afternoon.

Facebook commenters who claimed to see something similar surmised the lights were part of SpaceX’s Jan. 6 launch of a fleet of its Starlink internet satellites, which deployed into orbit as part of SpaceX’s goal to provide internet access around the world, especially in rural areas, according to SpaceX communications director James Gleeson. 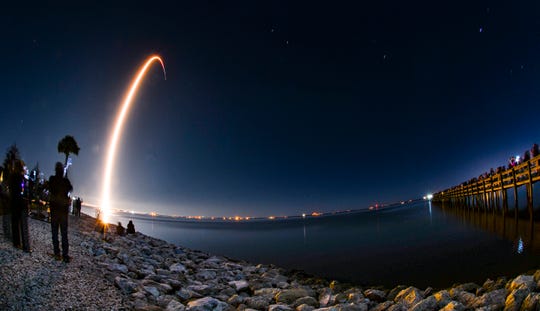 Given that he didn’t see them, Gleeson said he couldn’t definitively confirm the lights spotted over Horsetooth Reservoir were from Starlink satellites.

He explained that once deployed, Starlink satellites raise in altitude and, in that process, are closely clustered in a “low-drag configuration,” meaning they appear more visible from the ground.

A meteoric mystery: Did you see a green flash in the sky? Here’s what it probably was

When the previous fleet of 60 Starlink satellites launched in May, they were said to be quite visible to viewers on the ground, particularly in clear, dark skies. The tightly clumped spacecraft appear to look like a bright string of pearls, according to a recent article on Space.com.

Once the satellites reach their operation altitude of 550 kilometers and begin their on-station service, that orientation changes and they become far less visible. The fleet SpaceX launched Jan. 6 is testing an experimental darkening treatment on one satellite, Gleeson added.

I’ve called Fort Collins home for a decade and am proud to report on what’s happening on its streets, in its businesses and throughout the community. Support my work with a subscription today.

SpaceX shares its tracking data with satellite operators through the U.S. Air Force’s 18th Space Control Squadron, which is a part of the 21st Space Wing based out of Peterson Air Force Base in Colorado Springs.

When asked if the 18th Space Control Squadron could tell us whether Starlink satellites were visible from Fort Collins on Wednesday, a public affairs representative said the kind of data the squadron collects could not answer that question.

The descriptions of Wednesday’s sighting in southwest Fort Collins don’t match those of drone sightings both in northeastern and northwestern Colorado in recent weeks. Those sightings were typically of possible fixed-wing drones flying in grid-like formations while emitting loud motorized sounds, according to reports from Fort Collins and around the state.

While no organization or entity has stepped in to take responsibility for Colorado’s mysterious drones, the Colorado Department of Public Safety announced Monday it would scale back its investigation into the sightings.

Despite the drone sightings puzzling authorities and the public, the department said there have been no confirmed incidents of crimninal activity related to them and that investigations have not substatiated any reports of suspicious or illegal drone activity, according to a report released Monday.

My quirky feature articles, true crime podcasts and  stories that get to the heart of Fort Collins take time to produce each week. And the only way I can keep doing what I do is with your support. If you subscribe, thank you. If not, and you want to see me unearth more stories, sign up for a subscription to the Coloradoan today.